Angela Merkel and Emmanuel Macron staged this Thursday the good entente of the Franco-German axis, and their personal proximity. It was at the Elysee that the French president received ... 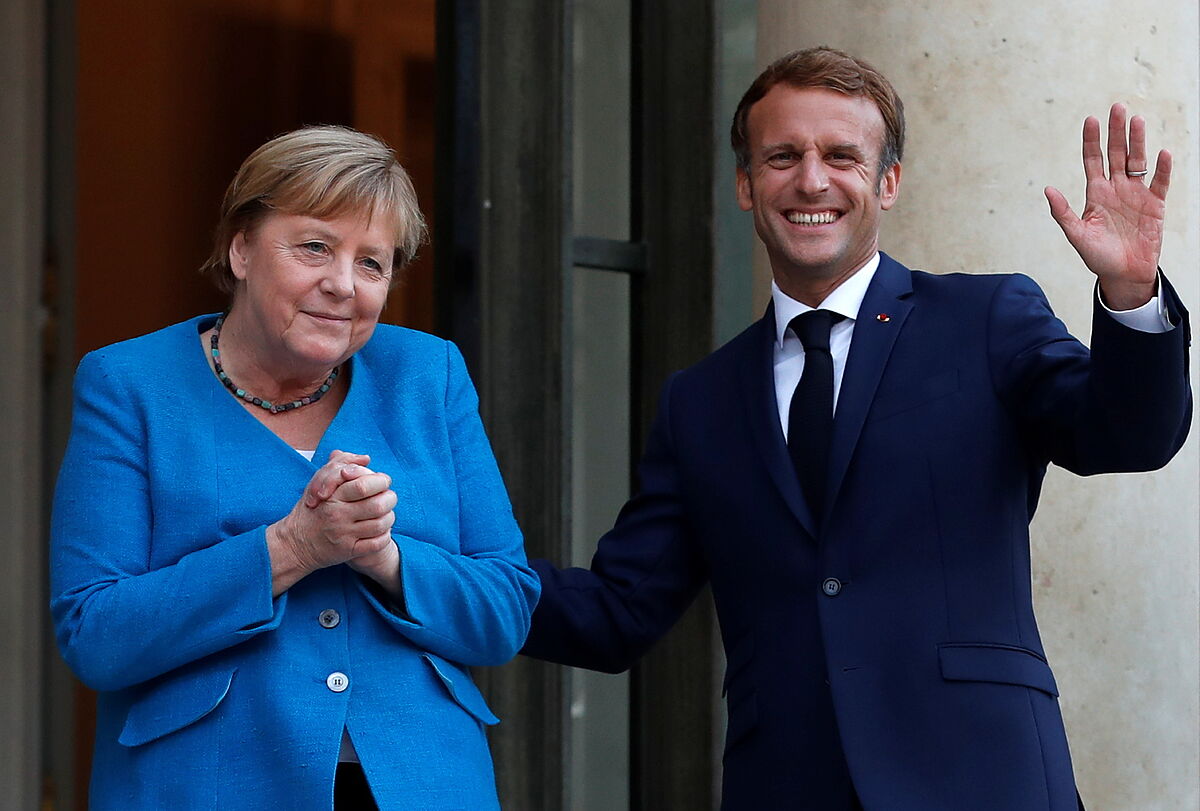 Angela Merkel and Emmanuel Macron staged this Thursday the good entente of the Franco-German axis, and their personal proximity.

It was at the Elysee that the French President received the German Chancellor.

A goodbye full of complicity, the last before the legislative elections on September 26 that will end the 16-year 'reign' of Merkel.

Perhaps there will be one more chance if the negotiations to form a governing coalition in Berlin drag on.

However, Merkel declared that "she will do everything in her power to

avoid too long a transition period"

that the EU blocks.

(The formation of the last coalition executive lasted six months.)

The Elysee has specified that it will pay an ad hoc tribute to Merkel for her European work.

So the agenda for the meeting / dinner focused on the present: Afghanistan, the Sahel and the preparation of the informal summit to be held in Slovenia at the beginning of October.

The two main candidates to succeed Merkel, the Social Democrat Olaf Scholz and the Christian Democrat Armin Laschet have already been received by Macron.

The understanding between Paris and Berlin seems guaranteed in both cases, Elíseo has made known.

But it will be difficult for the Franco-German axis to turn as oiled as in these years that have remembered the good couple that formed the socialist François Mitterrand and the Christian Democrat Helmut Kohl.

Merkel came to coincide in 2005 with Jacques Chirac in the twilight of his second term.

With the conservative and impetuous

did not make good political friends.

Nor with the socialist and fickle François Hollande.

Macron had to arrive with his willingness to carry out the reforms (labor and fiscal) demanded by Berlin and Brussels so that the Franco-German engine could get back on track.

"Merkel and Macron found a good way of working

before the European Council in which the French president launches the political debate and the chancellor tries to join the reluctant even though she has to lower the other's proposals", Stéphane Séjourné said in 'Le Parisien' , MEP close to the French head of state.

The most concrete fruit is undoubtedly the

An idea defended by Macron that always gave repellent in Berlin.

Obviously not everything has been a bed of roses.

Paris and Berlin have disagreed on nuclear power, relations with Beijing and other issues.

The political entente has gone hand in hand with the good chemistry between Merkel and Macron who have a tutelage, stay in the same hotel in some summits and sometimes have a drink together accompanied by a minimum group of collaborators.

That there continues to be good harmony is important for France, which corresponds to the rotating presidency of the EU in the first half of 2022. And for Macron who

aspires to a second term

in the presidential elections in April that everyone takes for granted that will be presented even if he has not said it officially.

If Macron went to Berlin before being elected, so have the two candidates most likely to succeed Merkel.

Both the Social Democrat

Olaf Scholz, who heads the polls,

Armin Laschet have been received, separately, at the Elysee.

Scholz, who is Vice Chancellor and Finance Minister, promises a more active role: "Germany is the most populous country in the EU and cannot be content with waiting around. That more active role is through cooperation with France.

We must go to Common Defense Systems ".

Laschet, born in Aachen, likes to remember that he hails from the Rhineland like Kohl and Konrad Adenauer.

He also calls for a more active role for Berlin: "In Kohl's time, Germany proposed things to Europe. Today, it is the French president who does it and we wait to respond."

With Laschet, Macron can expect cooperation in defense as well, but less sympathy for French advances towards loosening budget rules.

Aspiring environmentalist Annalena Baerbock has preferred to avoid a trip to Paris: "The Elysee is no place to campaign. I prefer to spend as much time as possible with my fellow citizens."