Mandatory green pass: the control room, then the decree in CDM

A single decree to extend the Green Pass obligation from mid-October to both public and private workers will be brought to the attention of the Council of Ministers this afternoon, preceded by a meeting of the control room. At 2.30 pm the meeting with the Regions. Yesterday Draghi illustrated this to the unions, who are asking for free tampons. The obligation would affect, in total, around 18 million people 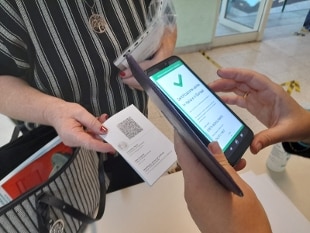 16 September 2021 Compulsory green pass to enter all workplaces. Here is the government's choice, on the front of the fight against Covid. We must hurry, to reach at least the 'safety' threshold of 80% of vaccinated people within a month. Therefore Mario Draghi decides to focus on the green certificate: "It works, it is monitored, it is an accommodating solution", he tells the unions, explaining why he preferred to impose the Pass and - for now - not the obligation to vaccinate. It is a "path that unifies", underlines the premier.

From mid-October it will be necessary to be vaccinated, have a swab or be cured of Covid, to enter public and private offices, but the obligation should also be extended to professional offices, shops, restaurants. For those who come to work without, there will be penalties: a fine, which should range from 400 to 1000 euros, and disciplinary, which will be modulated on the different categories. A ban on firing will be expressly provided for, acknowledging a trade union concern. While

the crux of the swabs remains: the request of the CGIL, CISL and UIL and some ministers, is to make them free for everyone

, but the government's line for now remains contrary, because the risk is to discourage vaccines.

Among the hypotheses is that of differentiating the entry into force of the measures, staggering them between 1 and 15 October. After yesterday's meeting with the unions,

today the control room for the final political choices

, and at 2.30 pm the meeting with the Regions, with the Minister for Regional Affairs Mariastella Gelmini who will illustrate the provision to the governors. Finally, at 4 pm, the text should arrive on the table of the Council of Ministers for the green light. The doubts of Matteo Salvini remain on record, who says he is against imposing the Pass "on all Italians". The Northern League's stomach ache reverberates in the parliamentary votes on the previous Green Pass decrees. But the League, which continues to ask for free tampons, is unlikely to clear away. Giancarlo Giorgetti, who with Renato Brunetta, Roberto Speranza and Andrea Orlando joined Draghi at the table with the unions, has already publicly expressed his support for the measure, which also pleases the governors of the North.

To date, according to government data, 13.9 million workers already have the Green pass, 4.1 million still do not:

the obligation would affect a total of about 18 million people

. Furthermore, according to the data of Commissioner Figliuolo, we would be close to "social immunity": accelerating now on the Pass in the workplace, serves to get closer to a "safety point" in 3 or 4 weeks, by mid-October to get vaccination complete with 44 million people, 81.7% of the audience.

, but it is a path that the government for now chooses not to take. The trade unionists also complain that they had to swab to enter the building, despite having the Green pass: "It's a contradiction", they say. And they ask that at least in a transitional phase, tampons are free for all, so as to allow those who do not have the vaccine to enter work at no cost. But on this point the premier and the majority of ministers would have doubts, due to the disincentive effect: controlled prices apply and will continue to apply.

"If the Pass is imposed, then the swabs are quick and free", asks Giorgia Meloni from the opposition. Another

delicate aspect is that of penalties, which are difficult to apply

especially in the private sector, but to be modulated also in the public according to the type of administration, with different disciplinary procedures: there would be suspension from work and salary after repeated violations for some categories, as already for teachers. Certainly, the obligation will apply to the courts and also for the constitutional bodies there will be a push to adapt: ​​"The Green pass must also be used to enter Parliament", the unions ask.

In the meantime, the Senate voted to trust the first Green Pass decree, which has become law since yesterday.