Lazio immediately down: in Istanbul, Galatasaray is 1-0

A sensational duck from Strakosha in the 66th minute gives the victory to the Turks, who also hit a crossbar and have two other clear chances. Milinkovic-Savic devours the draw, but Sarri's team does not shine&nbsp; 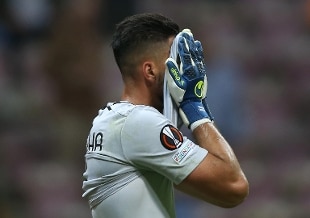 16 September 2021 False start of Lazio in group E of the Europa League: Fatih Terim's Galatasaray won 1-0 at the Turk Telekom Arena in Istanbul. In the other match of the group, 1-1 in Moscow between Lokomotiv and Marseille.

Controlled turnover of Sarri (only four changes compared to Milan) but biancocelesti who did not take off in a substantially balanced first half but poor in emotions. The only opportunity is for the Turks (23 '): the crossbar still vibrates on Morutan's great left-handed blow, with the ball bouncing just over the line. The former Muslera (only yellow card) on the launched Lazzari risks red at the start, but Lazio which is not seen in the offensive area. Too isolated. Property.

The race lights up in the second half. Muslera flies on the conclusion of Luis Alberto (61 '), Akturkoglu touches the target by a whisker. At 66 'colossal duck of Strakosha: ball that rears up in the area after an intervention by Lazzari, the goalkeeper goes out high but gets everything wrong and blatantly pushes the ball into the net. On Acerbi's launch, the new entry Milinkovic-Savic (71 ') is devoured, a few seconds after Strakosha's redemption, who denies the doubling to Cicaldau. Pedro tries too, but his header is without strength. Lazio surrenders.