The former governor of Charkent district, Salima Mazari, was rescued by a secret operation, days after she went into hiding inside the country, following the takeover of power by the "Taliban" in the country. This 39-year-old woman was one of only three provincial governors in Afghanistan, and the leader of the Mo militia. 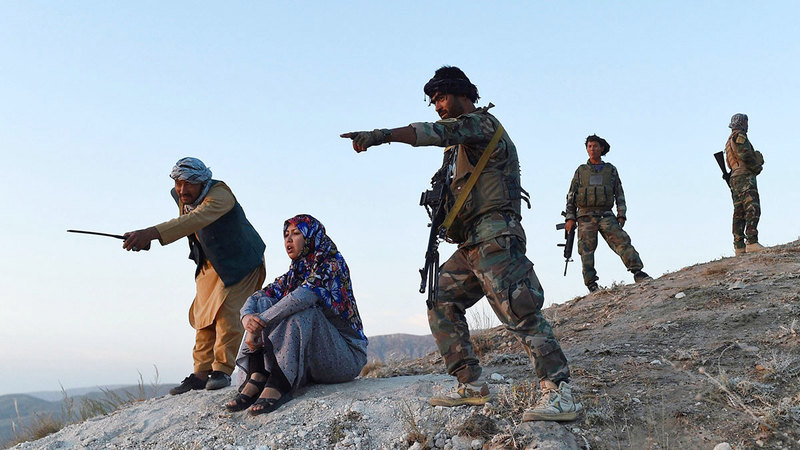 After days of hiding

"Salima" with members of its forces.

The former governor of Charkent district, Salima Mazari, was rescued by a secret operation, days after she went into hiding inside the country, following the takeover of power by the "Taliban" in the country.

The 39-year-old was one of only three female provincial governors in Afghanistan, the leader of a militia loyal to the former government, who enjoyed an international reputation as a brave fighter, and is now in a secret location in the United States.

Mazari was in the office of the governor of Balkh province, Muhammad Farhad Azimi, when news spread that Balkh had fallen to the Taliban, and soon received phone calls from militia leaders in her district of Charkinet, ordering her men to stop fighting.

Later, she accepted Azimi's proposal to flee to the city of Herat, which shares the border with Uzbekistan, with her husband and her guards, and was joined by several prominent leaders, including the former vice president and warlord, Abdul Rashid Dostum, and the former governor of Balkh and leader of the Mujahideen, Atta. Mohammed Noor.

When I arrived in Heratan, I found a number of senior officials of the former government huddled on the Afghan side, Mazari was not allowed to cross to the Uzbek side, and a few of those officials were allowed.

Being on the Taliban's list of targeted figures, she wore a burqa and took refuge in a relative's house, and after hiding there for two days, she decided to go to Kabul, and was well aware of the Taliban checkpoints that she would cross on her way, but she took a risk with her husband and relatives and succeeded in entering Kabul.

After arriving in Kabul, they began going from house to house to ensure that they could not be tracked, and since she is a high-ranking figure who could not go directly to the American embassy or the airport, so she sent her documents to friends who have links to foreign governments, including the United States, United Kingdom and Germany and Holland.

One of the people Mazari sent her documents was Zakaria, the Afghan journalist for Time magazine. Mazari had met him, in July, when he was writing an article about Afghan women, and he gave her his number.

On August 20, Zakaria, who had managed to fly to Paris earlier that week, texted Mazari, seeking confirmation of whether she was alive or not, and wrote to her: "I am worried, please tell me where you are."

She told him that she was in hiding, with little choice left, and sent him pictures of the identities of all her family members and asked for help. Zakaria immediately relayed this information to fellow journalist Robin in the newspaper "Time", and told him: "I just learned that Salima Mazari is in Kabul. ».

Rubin's friend, Canadian photojournalist Matt Rachel, was already working to help colleagues and friends get out of Afghanistan, Rachel was in touch with some American officials who knew the Mazari case well, and Rachel made several appeals to contacts in the Departments of State and Defense, hoping that one would work. .

“We prepared all her documents with a cover letter explaining that Salima Mazari is alive, that her life is in danger, and that she would likely be killed if she is found hiding in a safe house,” Rachel says. The State Department, from sending its information to the Interagency Task Force and a high-ranking figure in the US Secretary of State's office, responded within hours assuring assistance."

On August 23, Mazari received a message on an Afghan number purporting to be from the US Rescue Operations cell, and in a fit of excitement, after days of hiding and in fear, shared her family's information and direct location, including her photo, as requested by the sender.

But when I informed Zakaria about what had happened, he suspected that someone had hacked the communications because the instructions for the rescue operation were supposed to be in Dari (one of the Afghan dialects of Persian), and he suspected the interference of Pakistani intelligence agents.

Rachel called the number, but he did not find an answer, then he called again and a major in the US army answered it, and Rachel was able to hear several American voices in the background. Which gave him all its information and location.” And soon the US State Department confirmed that the rescue operation was real.

The strategy was to rescue Mazari and her family by helicopter, and bring them to Hamid Karzai International Airport. At the evening of August 24, she received a call asking her to reach the meeting point. At the appointed time, she began walking with 13 members of her family, including children.

Then I sent a message to Zakaria at 7:22 pm and informed him that she had arrived at Kabul airport, and the next day she and her family boarded an American military plane, and she is now in an unknown location in the United States.

The 39-year-old woman is one of only three female provincial governors in Afghanistan, and the leader of a militia loyal to the former government, who has an international reputation as a brave fighter.

Mazari was in the office of the governor of Balkh province, Muhammad Farhad Azimi, when news broke that Balkh had fallen to the Taliban.