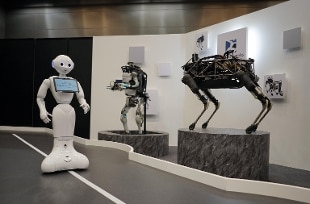 , the cute robot who greeted visitors to many events and fairs with a greeting since 2014: with an effective move, the CEO of SoftBank Group, Masayoshi Son, has sanctioned, from 2023, the end of the popular robot: "We had a great debut event with Pepper several years ago, now it's time for him to put his head down," Son said, in front of poor dead Pepper.

At the SoftBank World 2021 online conference - Japanese investment giant especially in the technology, energy and financial sectors - its founder said the company is collaborating with 18 other companies developing

that go far beyond the limited capabilities of the even likeable Pepper, who will be replaced by a new generation of more functional intelligent robots - which he called '

', smart robots, which "can revitalize Japan's economy and competitiveness".

Machines that, according to Son, have the potential to

: an intelligent robot can take on 10 times the daily output of a human, thus, 100 million robots could do the work of 1 billion people, he added. .

In the future, therefore, "intelligent robots will replace not only workers in manufacturing and industry, but

"said the CEO of SoftBank. All while in the background were videos of humanoid robots running and jumping and machines cleaning floors." Humans will be freed from

, "Son added," to work on something. which has more

, The fastest-aging country in the world, where the number of over-one-hundred-year-olds exceeds 86 thousand people and where life expectancy reached a record level for both sexes in 2020: 87.74 years for women and 81.64 years for the men. A nice milestone, but one that raises concerns about the economic outlook and the future workforce, as the birth rate is steadily declining.