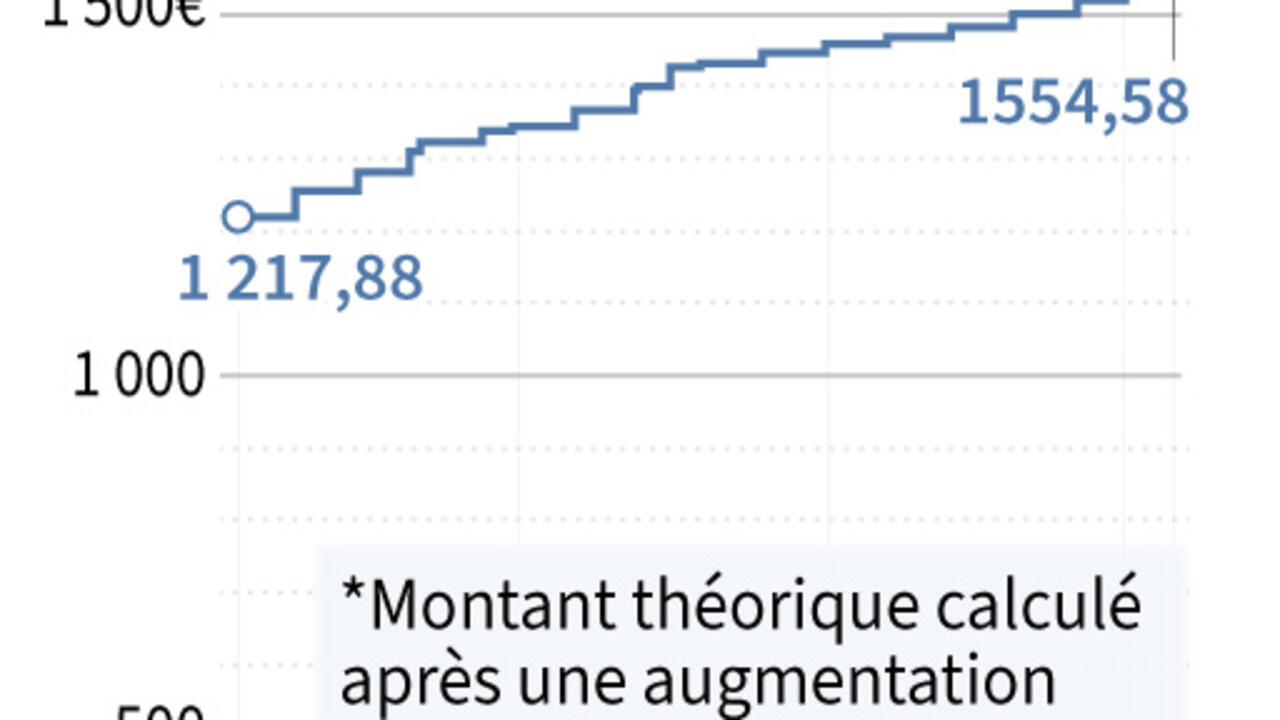 Employees paid the minimum wage will receive nearly 35 euros gross more on October 1, thanks to the mechanical revaluation of the minimum wage due to inflation, such an increase during the year linked to the evolution of prices having been unprecedented for ten years. years.

The last automatic increase in the minimum wage due to inflation, excluding January 1, was 2.1% on December 1, 2011.

Currently at 1,554.58 euros gross per month, the minimum wage will be increased to around 1,589 euros, the gross hourly minimum wage to increase from 10.25 to 10.48 euros, according to AFP calculations.

The Ministry of Labor will communicate the exact figure in the evening after a meeting with the group of experts on the minimum wage.

This increase is mechanical because the Labor Code (article L3231-5) provides that "when the national consumer price index reaches a level corresponding to an increase of at least 2% compared to the index observed" during from the establishment of the “immediately preceding” minimum wage, the minimum wage is raised “in the same proportion” the following month.

However, the figures published on Wednesday by INSEE show that the consumer price index rose by 2.2% compared to November 2020, the reference month for the last revaluation.

As every year, the minimum wage was increased by 0.99% on January 1.

The previous year, it had been revalued by 1.2% for 2.25 million beneficiaries, or 13% of employees, according to Dares.

With the increase on October 1, and barring a sharp acceleration in inflation in the fall, the next revaluation on January 1 should, on the other hand, be lower since it will be calculated on the sole price change between August and November.

Each year, some unions (such as the CGT which claims a minimum wage of 1,800 euros gross) ask the government to go beyond the automatic increase, but the last "boost" (0.6% coupled with 1, 4% for anticipated inflation) dates back to July 2012, the day after the election of Socialist François Hollande.

The governments that followed refrained from any one-off increase, arguing that it would hurt the employment of the less skilled.

The Minister of the Economy Bruno Le Maire again underlined last week that "to give a boost (to the minimum wage) was also to give a penknife to the recovery of employment".

He highlights the fact that the government has already acted for low wages, for example by increasing the activity bonus.

While the pressure is mounting on the subject of purchasing power seven months before the presidential election, the government prefers to push for branch negotiations and urge companies to increase low wages.

Prime Minister Jean Castex thus requested last week the opening of negotiations in new branches, including the hotel and catering industry and the agro-food industries.

Such discussions have already been initiated in several branches, with agreements concluded for example in the retail trade (wage increase from 1.5% to 2% depending on skill levels).

For the unions, this automatic increase in the minimum wage is insufficient.

For the CFDT, "second line" workers, particularly exposed during the health crisis, "deserve better than a 2.2% increase in the minimum wage".

Employers "through branch negotiations, have the cards in hand," said the union in a statement, noting that "some do not play the game".

And the government "can intervene to avoid indecent proposals (...) by making the payment of public aid conditional on quality social dialogue".

Yves Veyrier (Force Ouvrière), for his part, underlined on Twitter that the automatic increase "was only the catching up of inflation", calling for "an immediate plan to upgrade all jobs confined to low wages, in time partial and too often in precarious contracts ", of which the" second line "belong in particular.

The CFTC hailed "good news for workers" while assuring that it would continue to "push" for a boost.