Impact on Jupiter. An object tens of meters large hits the giant of the Solar System

Observed the fall on the planet of an asteroid or a comet. The astronomer Albino Carbognani of INAF: "From the first estimates, on Earth it would have been a disastrous event, at least comparable to the 1908 Tunguska catastrophe" 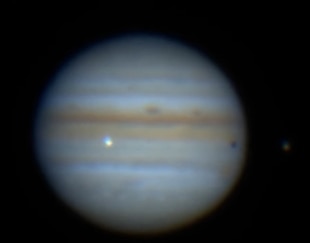 15 September 2021From Europe to South America, astronomers were observing something else: the shadow of the satellite Io silhouetted against Jupiter, that is, an eclipse of the Sun on the giant of the Solar System. Suddenly a white dot appeared on the planet's disk. Anyone who was taking pictures or filming a movie was lucky enough to capture the impact in the atmosphere of a large object, most likely an asteroid or a comet.

Everything happened in a few seconds, when in Italy it was 0.39 on September 14th. This is a video shot from France, by a member of the Société Lorraine d'Astronomie.

"From the videos available online it is difficult to accurately estimate the brightness of the flash of the impact, but some preliminary estimates can be made: the object was probably an asteroid 30-40 meters in diameter or a comet 50-60 meters in diameter. - says Albino Carbognani, astronomer of the INAF of Bologna astrophysics and space science observatory - From a certain point of view it is the continuation of the growth process of the planet. If it had happened on Earth it would have been a disastrous event, at least comparable to the Tunguska catastrophe of 1908 ”.

This is not the first time this has happened. In 1994 Jupiter was hit by fragments of a comet, the Shoemaker-Levy 9. Other impacts were observed in July 2009, August 2010, March 2016 and May 2017. Then and also on this occasion the consequences were minimal. , not only because of the large size of the planet but also because it is a gas giant, that is, composed for the most part of gas. “It does not have a solid surface so no crater has been created - explains Albino Carbognani - However, it is not excluded that the event left a trace in the atmosphere observable for a few days from the Earth and perhaps also from NASA's Juno probe. It is in orbit around Jupiter and if it were in the right position it could send us some close-up images ”.