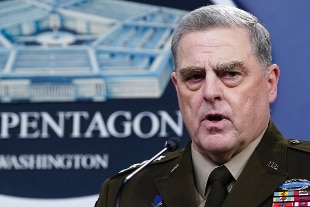 September 15, 2021 Joe Biden has "full confidence" in US Joint Chief of Staff Mark Milley. A White House spokesman said this after the revelations in Bob Woodward's latest book, according to which two days after the assault on Congress on January 6, the general limited the possibility that then President Trump would order a dangerous military attack or launch a nuclear weapon and phoned his Chinese counterpart twice to reassure him against intervention. Revelations that have sparked a wave of controversy among the Republicans, who have asked for his resignation.

White House spokesman Jen Psaki said Biden has full faith in Milley's "leadership, patriotism and loyalty" to the US Constitution.

Milley defends himself: phone calls to China in line with my duties

Joint Chief of Staff Mark Milley has meanwhile defended the phone calls made to his Chinese counterpart in the last months of the Trump presidency, stating that the conversations were in line with his duties as president of the Joint Chiefs of Staff. In a written statement, Milley's spokesperson Colonel Dave Butler said the general acted within his authority as the senior uniformed adviser to the president and secretary of defense.

The anticipations of Woodward's book

Milley's phone calls were revealed in excerpts from the upcoming book "Peril" by Washington Post reporters Bob Woodward and Robert Costa. According to the book, Milley told People's Liberation Army General Li Zuocheng that he would warn his counterpart in the event of a US attack.