Vaccines, Lombardy: 80% of over 12s with a full cycle. The third dose starts

The Vice President of the Moratti Region underlines the result of the Region, the first in Italy to achieve the objective of Commissioner Figliuolo 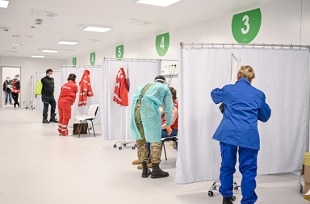 September 14, 2021 "Today Lombardy reaches the goal set by Figliuolo of

80% of its population over 12 years with full vaccination

. We are the first region to reach this goal". The vice president and councilor for welfare of the Lombardy Region,

. "Thanks to all the operators and to the Lombard citizens - adds Moratti -. Let's get vaccinated, let's protect ourselves!".

“Well Lombardy, which has reached the goal of complete vaccination for 80% of the population over 12. The Regions, in collaboration with the commissioner of General Figliuolo, are running. Now extension of the green pass to new sectors to accelerate further, ”he writes on Twitter

, Minister for Regional Affairs and Autonomies.

"Thanks to the work of Francesco Paolo Figliuolo and everyone to vaccinate the Italians as much as possible, the risk of a new lockdown is really, from this point of view, excluded". This was underlined by

, consultant of the Lombardy Region for the vaccination campaign, in a television interview.

Ready for the third dose

"Yesterday it was announced by the Commissioner Structure that the start of the administration of additional doses of the anti Covid-19 vaccine, the so-called 'third dose', is scheduled for Monday 20 September starting from the subjects more exposed or at greater risk of serious illness ”, reads a note from the Lombardy Region.

“We will start - continues the note - with solid organ transplant patients and hematopoietic stem cells and we will continue with the other categories of immunocompromised patients, such as patients undergoing chemotherapy. Pending the precise definition of the target population by the

Ministry of Health, the Crisis Unit of the Lombardy Region has already defined the activities and priorities for the elaboration of the operational plan for the administration of additional doses and 'booster' doses " .

"This plan, after sharing with the Ats, the Asst and the representatives of general practitioners, pediatricians of free choice, pharmacies - concludes the note - will be officially presented next week at a press conference"