Movie star McConaughey, who is hugely popular, threatens the Republican governor of Texas

Both the Democratic and Republican parties are waiting for McConaughey's steps with great concern. While Democrats have been trying to secure the Texas governor's seat for 26 years, Republicans consider his candidacy on the Democratic party lists a real nightmare. 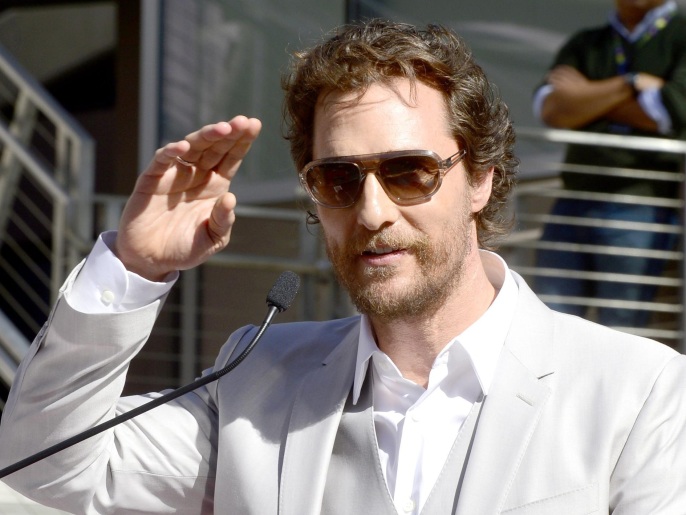 Actor Matthew McConaughey is following in the footsteps of former US President Ronald Reagan and former California Governor Arnold Schwarzenegger confidently and calmly towards the November 2022 gubernatorial elections, where he intends to run for governor of Texas.

Matthew is one of the most prominent Hollywood stars, and he received two Golden Globe Awards and an Oscar in 2013.

Both the Democratic and Republican parties are waiting for McConaughey's steps with great concern, while Democrats have been trying to get the Texas governor's seat for 26 years, Republicans consider his candidacy on the Democratic Party lists a real nightmare that guarantees the loss of the seat they have long considered guaranteed to them, which is occupied by business supporter Greg Abbott. in the state.

Despite the Hollywood production’s preoccupation with political interactions, both inside and outside the United States, and their impact on the conscience of peoples and their monitoring of major political transformations, only two stars out of hundreds of stars have taken the path towards political leadership, the first of which is the 40th President of the United States, Reagan, who ruled California from 1967 to 1975 and ruled the United States from 1981 to 1989, and his most famous films are "Santa Fe Trail" (1939) by Michael Cortez and "Kings Row" 1940 (Kings Row) directed by Sam Wood.

As for the action movie star of Austrian origin, Schwarzenegger, he rose to fame through the gates of the World Bodybuilding Championships, and then action films, where he presented the Conan series and the Terminator series, and then became the 38th Governor of California.

McConaughey has good chances to win the seat of governor of Texas, especially since the balance of his fame as an actor includes social attitudes that are admired by the state's residents who hold him especially dear, as he grew up and studied at Yuvald University in Texas, and established a charitable foundation called "Just keep living." The livin Foundation has contributed to many projects in support of the state's residents.

His responsible attitude towards the damage caused by the February 2021 storm on Texas impressed the American people, as he organized a support campaign entitled "Necessities" during which he provided the basic needs of everyone who was damaged because of it, and the most prominent thing that this star did was to sell his luxury car for the benefit of the victims. Hurricane that hit Texas.

McConaughey was born on the fourth of September 1969 to a middle-class family, his mother was a teacher, and his father owned a car catering station, and he is the third of his brothers who worked with his father, but he broke everyone and traveled to Australia, then he returned and decided to become a professional law by studying law in The University of Texas, but his work in commercials led him to discover his true passion for acting, so he studied film production and graduated in 1993.

The career path of the American star was not rising at a regular speed, but he learned from his failures, and did not repeat the mistake more than once, whether in the professional or personal path, and when he had the opportunity, he climbed to the highest point in Hollywood, where he received the Academy Award for the “Dallas Buyers Club” In 2013, a movie in which he lost about 20 kilograms of weight in order to present his role.

At the Oscars, he gave a speech after receiving the award that was enough to present another McConaughey that the general public does not know, during which he showed the righteous son and husband who appreciates, respects and honors his wife and the affectionate father who melts with love for his children, but the most prominent part of that speech came about the idea of ​​choosing a role model and told how He discovers that he is his role model but 5 years later from the moment he decides that he is a role model himself.

McConaughey seemed more emotional, rational and synthetic, and received sufficient respect and convincing justification for a number of roles that he played in a different way from what he used to represent in the world, and perhaps his most famous and most influential scenes in the audience when he cried and millions cried with him in the movie (Interstellar), where the scene presents a very complex situation for a traveling father. Through dimensions, times, planets and galaxies to save planet Earth from a catastrophe that will completely remove it and leave his children, knowing that the probability of his return is almost zero, and he settled in a planet where the time calculation differs from the time calculation on Earth, the hour there is equal to 7 years here, and McConaughey receives a video from his son, who sees it A child, a teenager and a young man.

The son says that he will stop sending his messages because he does not know whether the father is alive or dead, and here the tears of Father McConaughey explode, and the viewer receives a picture of a burning heart and hearts with him.

McConaughey's arrival at this level of performance was not only a product of talent, but the result of diligence, planning and review. He stopped working for two full years because his acting career turned at a specific stage into a space he considered less than his ambition, which is to provide tournaments for romantic comedies and turn him into an icon in this field. He granted himself a vacation that began in 2009, and returned two years later to start a new stage with the movie "The Lincoln Lawyer", which won an Academy Award in 2013.