How political should the church be? The issue raises a heated debate ahead of the church election on 19 September. During the last church election, the non-partisan nomination groups advanced their positions, and now more votes are being raised because party politics does not belong in the church. 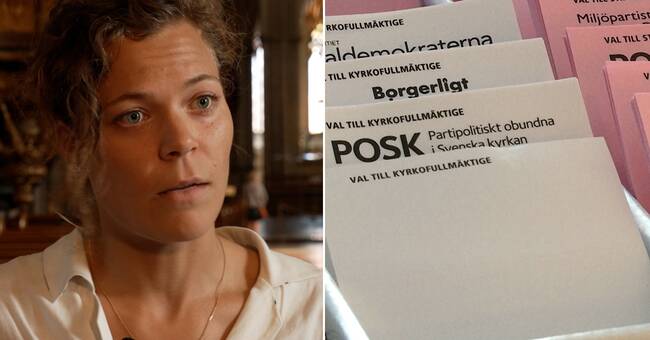 Early voting is in full swing before the church election.

There you can, among other things, cast your vote on nomination groups such as the Christian Democrats in the Church of Sweden, the Sweden Democrats or the Social Democrats, but also on party-politically independent nomination groups, something that today creates debate.

Amanda Carlshamre from POSK, the independent group that received the most votes during the last election, is critical of the fact that parliamentary politics is moving into the church's sphere:

- There will be a confusion between politics and theology in the church election and in church issues, she says.

She sees the existing system, where parliamentary parties stand in the church election, as a remnant from a time before the church separated from the state:

- It is a remnant that remains, and we hope from POSK's side that this will be a hundred-year bracket in Sweden's church history, she continues.

Critical of the unbound

The party-affiliated nomination group that received the most votes last year is the Social Democrats, and their church policy spokesman Jesper Eneroth does not share the car that the church can be apolitical:

- The church has faced its entire history with political discussions, it is by no means new.

- I do not value how other groups organize themselves and I think it is remarkable that there are groups who want to limit my involvement and think it is not as nice because I am driven by social democratic values, he continues.

- There is a strong party politicization of the church election, says Jan Strid, retired senior lecturer at the Department of Political Science at the University of Gothenburg.

He has followed the church election in Sweden for more than 20 years and he seems to see a clear trend towards the Riksdag's debates moving into the church.

But that may now be about to change.

- It is possible that the part among the voters who want more Jesus Christ in the church is now growing, rather than those who want the sustainability, climate and such of the political parties. It is a question of which direction to go now, he continues.