After the arrest of 4 escaped prisoners, the occupation intensifies the search for the last two prisoners and a unified emergency committee to protect prisoners

The Israeli occupation forces intensified their search for the two prisoners, Munadil Nafe’at and Ayham Kammji, after arresting 4 of the six prisoners who escaped from Gilboa prison, while the Palestinian factions formed an emergency committee to confront the occupation’s suppression of prisoners. 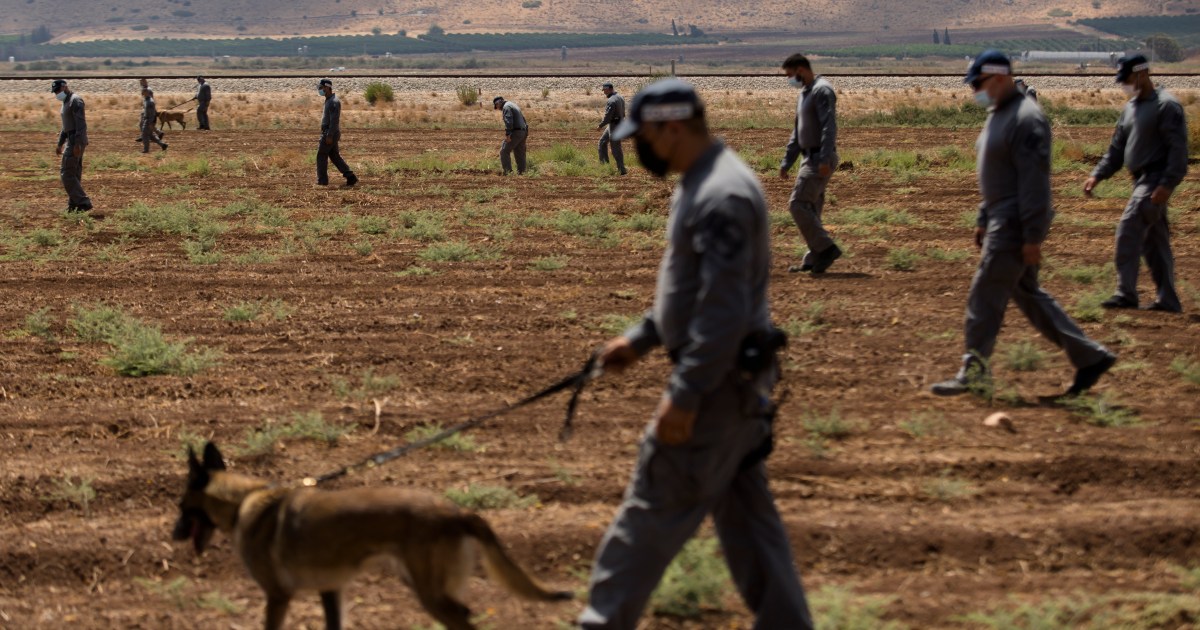 The Israeli occupation forces intensified their search near the town of Nazareth for the two prisoners, Munadil Yaqoub Nafe’at, and Ayham Fouad Kammji, after arresting 4 of the six prisoners who escaped from Gilboa prison a few days ago, while all Palestinian factions in the occupation prisons announced the formation of an emergency committee to confront the Israeli Prison Authority’s suppression of prisoners.

Al-Jazeera correspondent reported that an Israeli helicopter was conducting search and sweep operations in the Marj Ibn Amer area (south of Nazareth).

The criminal investigation agents also began to upload evidence they found in an agricultural field, at a time when the Israeli police deployed checkpoints in the area witnessing intense security reinforcements.

On Saturday morning, the Israeli occupation forces arrested the two Palestinian prisoners, Zakaria Al-Zubaidi and Muhammad Ardah, bringing the number of those arrested during the past hours to 4 of the six prisoners who escaped a few days ago from Gilboa prison.

Al-Jazeera correspondent said that the Israeli security forces arrested the two prisoners, al-Zubaidi and Aardeh, in a parking garage between the villages of Arab al-Shibli and Umm al-Ghanam at the foot of Jabal al-Tur (south of the city of Nazareth).

Israeli media said that intelligence information had reached the police indicating the whereabouts of the two prisoners hiding before their arrest.

The Hebrew "Wala" website said that the former commander of the Al-Aqsa Martyrs' Brigades, Zakaria Al-Zubaidi, tried to resist his arrest and escape, but he was very exhausted and was immediately brought under control.

The website indicated that the two were transferred to the investigation cellars of the Shin Bet security service.

Two prisoners remained at large among the six - all residents of Jenin Governorate (in the northern West Bank) - who managed to escape through a tunnel from the high-security Gilboa prison.

Zakaria al-Zubaidi, a member of the Revolutionary Council of the Palestinian National Liberation Movement (Fatah), and the rest of the 5 belong to the Islamic Jihad movement, and they are the fighter Yaqoub Nafi’at, Muhammad Qasim al-Ardah, Yaqoub Mahmoud Qadri, Ayham Fouad Kammaji, and Mahmoud Abdullah al-Ardah.

On the other hand, Sobhia Ardah, the mother of the captive Muhammad Ardah - who was re-arrested at dawn today - said that she received a call from an Israeli officer informing her of the arrest again of her son Muhammad, but he did not let her talk to him.

Sobhia Arida, who was visited by Al-Jazeera correspondent at her home in the town of Arraba in Jenin, said that she had hope about the situation of her son Muhammad.

In a related context, an informed source from the "captive movement" stated that all Palestinian organizations and factions in the occupation prisons have formed an emergency committee to confront the Israeli Prison Authority's suppression of all prisoners and the prisoners of Islamic Jihad in particular.

The source added to Al Jazeera that - despite the difficulty of communication between prisons - a committee was formed that is looking to start an open hunger strike that will include in the first phase 1,500 to 2,000 elite prisoners, in addition to setting a work program for the remaining prisoners to confront the repression they are subjected to.

In turn, the Palestinian Prisoners and Ex-Prisoners Commission announced that it assigned its legal staff to make every possible effort to follow up and determine the fate of the four Palestinian prisoners who were re-arrested by the Israeli authorities, 5 days after their freedom through a tunnel dug in Gilboa Prison.

The authority said - in a statement - that its staff is working to verify and reveal their detention conditions and places of detention.

She warned that the occupation authorities would abuse them, retaliate against them, and torture them.

Al-Jazeera correspondent in Jenin, Guevara Al-Budairi, said that a state of great anger pervaded the Palestinian territories after the re-arrest of the four prisoners, and that the people of the town of Arraba carried out an open strike in solidarity with the prisoners.

Demonstrations took place in several areas of the occupied West Bank following the announcement of the arrest of two prisoners on Friday.

In the Jenin governorate, Palestinian youths organized a march in the town of Arraba, which reached the house of the captive Mahmoud Al-Ardah, to express their solidarity with the family, before heading for another march to the village of Bir Al-Basha, the birthplace of the captive Qadri.

As for the city of Ramallah (central West Bank), dozens of young men gathered in the center of the city and set out for a march that roamed its streets, chanting slogans expressing their solidarity with the prisoners.

In the south of the West Bank, young men marched in Aida camp in Bethlehem, chanting angry slogans expressing their solidarity with the prisoners.

On Friday, Palestinian camps and gatherings in Lebanon witnessed a series of popular movements and demonstrations, as part of what it called "Friday of Grabbing Freedom", in support of Palestinian prisoners in Israeli prisons.

Ain al-Hilweh camp in Sidon (south) witnessed a massive solidarity sit-in, in support of the Palestinian prisoners in the face of the Israeli campaign of repression targeting them inside their prisons, and "in defense of the prisoners of freedom, the heroes of the Liberation Tunnel."

In the city of Tire (south), the Rashidieh, Al-Bass and Al-Burj Al-Shemali refugee camps witnessed popular sit-ins and sit-ins, in support of the Palestinian prisoners and to demand the protection of the prisoners who were able to free themselves from the prisons of the occupation.

For its part, the Islamic Resistance Movement (Hamas) said - today, Saturday - that "the battle waged by the Palestinian prisoners escaping from the Israeli Gilboa prison succeeded in breaking the prestige of the occupation and its security system."

The movement's spokesman, Fawzi Barhoum, confirmed that the arrest of some of these prisoners is only a round of open and extended conflict with the Israeli occupation.

He stated that this tour will constitute an impetus for the Palestinian people in the West Bank to continue the resistance and intifada against the occupation, in support of the prisoners and in defense of their rights.

He explained that the popular national situation that accompanied the Battle of Freedom Tunnel revived hope again in the hearts of all the Palestinian people.

He stated that the explosion of the West Bank in the face of the occupation is only a matter of time, as it requires expanding the area of ​​engagement and intensifying the jihadi resistance action in all the arenas of the West Bank.

A missile from Gaza and an attack in the West Bank

Hours after the arrests of Zakaria al-Zubaidi and Mahmoud al-Ardah, activists in the Gaza Strip fired a missile at Israel that was intercepted by the Iron Dome system, the Israeli military said. Sirens sounded, but there were no reports of damage or injuries.

Al-Jazeera correspondent in the Gaza Strip reported that at dawn today, Saturday, Israeli warplanes bombed sites of the Palestinian factions in the north, center and south of the Strip.

Last night, the Israeli army announced the interception of a rocket-propelled grenade fired from the Gaza Strip at the Eshkol settlement complex, adjacent to the Gaza Strip's borders.

The Israeli army has also mobilized its forces in all areas adjacent to the border with the Gaza Strip, in anticipation of more shooting and rocket attacks.

On Friday evening, Palestinian gunmen opened fire at an Israeli checkpoint in the north of the occupied West Bank, following the announcement of the arrest of Mahmoud Al-Ardah and Yaqoub Qadri.

The Palestinian Prisoners Club and the Palestinian National Liberation Movement (Fatah) held Israel responsible for any harm caused to the prisoners who were arrested.

In a statement, the Fatah movement called on the international community and human rights organizations to intervene to provide protection for the prisoners inside the occupation prisons, and to stop the occupation attack being carried out on them.