The Dubai Court of Appeal amended the prison sentence to become only one year, and a fine of 200,000 dirhams, instead of two years, according to the ruling issued by the Court of First Instance “crimes” against a European businessman and an Asian person, for the first possession of false sums of money, and broadcasting a video clip on the application "Instagram" and he 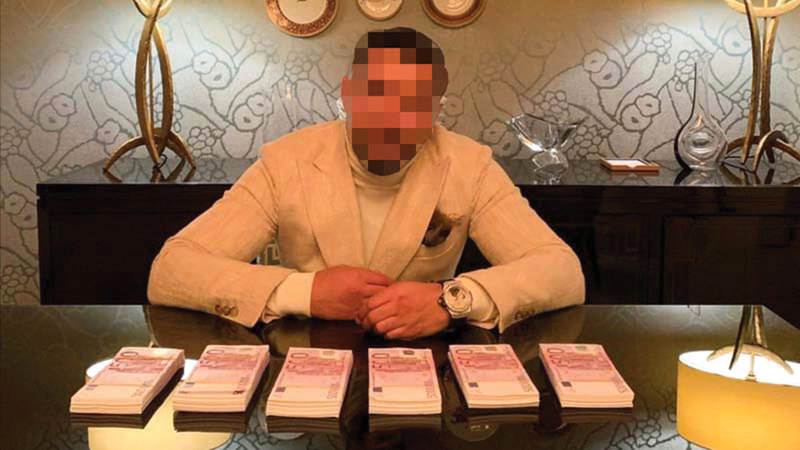 The Dubai Court of Appeal amended the prison sentence to become only one year, and a fine of 200,000 dirhams, instead of two years, according to the ruling issued by the Court of First Instance “crimes” against a European businessman and an Asian person, for the first possession of false sums of money, and broadcasting a video clip on the application “Instagram”, throwing about 50 thousand euro currency from his vehicle at a number of workers, with the help of the second defendant, who provided him with counterfeit money, which the court ruled to confiscate.

Dubai Police monitored a video clip of dozens of workers crowding the car of the first accused while he was throwing sums of money from his car, bragging about an inhumane scene, and endangering the safety of these workers due to their failure to adhere to the precautionary measures against the emerging Corona virus, so I pursued the accused and discovered after his arrest that the money that boasts Throwing it a fake, to publish the video on his account with the aim of increasing the number of his followers, so he and the other accused were referred to the Public Prosecution Office in Dubai, and from there to the Criminal Court, on charges of committing a felony of introducing counterfeit currency and possessing and counterfeiting currency circulating in the country.

A witness from the Electronic Investigation Department in Dubai Police said that the Public Prosecution investigations, "The electronic patrols monitored a video clip posted on (Instagram), of a person throwing sums of money in euro currency from his vehicle while it was driving, which prompted many workers to race to collect it in a way that disturbs public order." .

He added that a team from the administration was able to identify the driver of the car, the first suspect (E.M. - a European), and arrested him in the parking lot of a shopping center.

He added that by asking the accused about the incident, he admitted what was stated in the video in Al Quoz Industrial Area, to increase followers on his account, and to appear in the image of the person who lives a luxurious and luxurious life, and admitted that he threw 50 thousand euros from the car, but it was not real, and bought it from an online store at a value of 1000 dirhams. And he documented his confession in a conversation via WhatsApp between him and an Asian employee who bought him those coins.

He added that permission was obtained from the Public Prosecution Office to search the residence of the first accused, where an amount of 700,000 counterfeit dollars was found, in addition to the amount of 417 thousand counterfeit euros.

He indicated that by asking the second defendant, he admitted printing the counterfeit money in the shop, through a computer, at the request of the first defendant who told him that he would distribute it in a party as a show, and he also admitted to handing over the first amounts of money previously, but he made sure to write the phrase “money.” unreal.”

The witness confirmed in the investigations of the Public Prosecution that the behavior of the first accused by throwing money at the workers is insulting, affects public morals, and endangered their lives by collecting them in light of the current conditions associated with the “Corona” pandemic, as well as the possibility of them being exposed to car accidents due to their gathering in an unsafe manner, and the counterfeit coins That he was throwing allows the possibility of spreading among people.

He pointed out that the accused showed on his account on "Instagram" a clip while driving a luxury car and surrounded by bundles of dollars, and a friend of his was arrested, who filmed him while throwing money, and he was referred to the Misdemeanors and Violations Court for not having a role in counterfeiting currencies, pointing out that the workers They were deceived by the money that the accused was throwing because it looked like the real one, and they belonged to a simple category and it was difficult for them to distinguish between real and fake coins.

A report issued by the forensic evidence confirmed that the fake money used by the liar millionaire is similar to the real one, and the average person can be deceived.

For his part, the first accused before the Criminal Court retracted his confessions he had made in the police report and the investigations of the Public Prosecution, but the court reassured the previous confessions and did not take into account his denial.

Dubai Police monitored a video clip of dozens of workers crowding the car of the first accused, throwing sums of money.