Qatar evacuates travelers and sends additional aid to Kabul, and Moscow will not attend the inauguration of the Taliban government

Qatar evacuated travelers from Kabul for a second day, and sent additional aid to the Afghan capital. Washington praised Doha's role in evacuating Americans and foreigners from Afghanistan, and Russia said it would not attend the inauguration ceremony of the Taliban government. 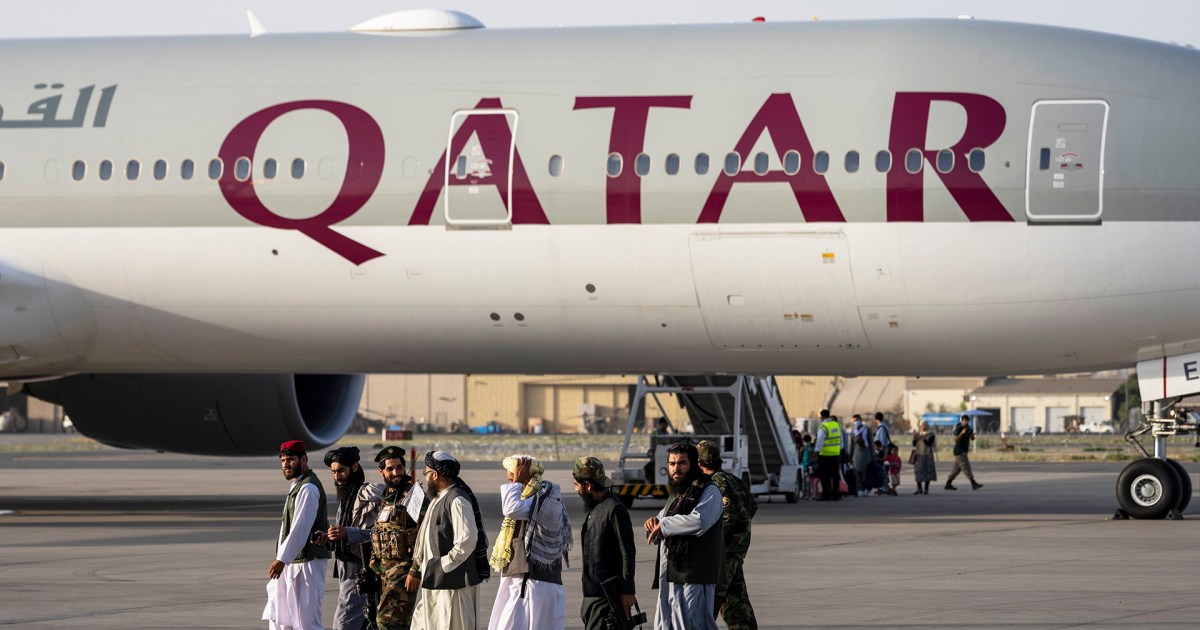 Qatar evacuated travelers from Kabul for a second day, and sent additional aid to the Afghan capital. While Washington praised Doha's role in evacuating Americans and foreigners from Afghanistan, Russia said it would not attend the inauguration ceremony of the interim government formed by the Taliban.

Al-Jazeera correspondent Hamdi Al-Bakari said that a Qatar Airways plane took off this Friday afternoon from Kabul Airport towards Doha, with 156 Afghan passengers on board, and it is likely that some of them hold the nationalities of other countries.

He added that these travelers will later go to other countries that had agreed to host them.

He added that this commercial flight is the second of its kind after the flight that Qatar Airways operated on Thursday evening from Kabul Airport, which carried 200 passengers, including Americans and Afghans holding US green residency cards, in addition to other nationalities.

In the past few days, Qatari planes carried shipments of tens of tons of urgent relief aid, and other aid, some of which were provided by Qatar Charity and the Qatar Red Crescent.

Yesterday, Thursday, Hamad International Airport in the Qatari capital, Doha, landed the first international commercial flight from Kabul Airport since the withdrawal of US forces from Afghanistan at the end of last month.

On the same day, Mutlaq bin Majid al-Qahtani, the special envoy of the Qatari Foreign Minister, announced that the airport was ready for international navigation after Qatari technical teams managed to restart it and repair the damage it sustained during the withdrawal of US forces.

Simultaneously, the first Pakistani humanitarian aid plane arrived at Kandahar Airport (southern Afghanistan), loaded with tons of food and medical supplies, and the second to arrive in Afghanistan after a plane landed on Thursday at Kabul International Airport.

Afghan sources said that more aid will arrive from Pakistan through the Spin Boldak crossing in Kandahar in the coming days.

The arrival of more Qatari and Pakistani planes comes at a time when several parties and personalities have called for accelerating humanitarian work and not linking it to political developments in Afghanistan.

In this context, Spanish Foreign Minister Jose Manuel Alparis announced - in a press conference with his Pakistani counterpart in Islamabad - that a donors' conference for Afghanistan will be held next Monday in Geneva, saying that his country will participate in it and will not abandon Afghanistan.

Meanwhile, US Secretary of State Anthony Blinken praised Qatar's role in the process of evacuating Americans and foreigners from Afghanistan yesterday evening.

Blinken welcomed the Taliban's facilitation of the evacuation of these nationals as part of its commitment to allow anyone who wishes to leave Afghanistan, and considered their departure from Kabul Airport on a Qatar Airways flight to Doha "the fruit of close interaction with US partners, especially the State of Qatar."

Politically, the Kremlin announced today, Friday, that Russia will not attend the swearing-in ceremony for the interim government formed by the Taliban movement, which is supposed to take place tomorrow, Saturday.

Kremlin spokesman Dmitry Peskov said his country would not participate in the ceremony in any way.

For his part, Iran's permanent representative to the United Nations, Majid Takht Ravanchi, said that his country will not recognize any government that comes to power by force in Afghanistan.

Ravanchi added - during a meeting of the UN Security Council - that Tehran is waiting for the Taliban to implement its promises to form a comprehensive Afghan government.

In another development, Pakistan categorically denied any involvement in the battles that took place in the Panjshir region (north of Kabul) between the Taliban and forces opposed to it led by Ahmed Masoud, which ended with the movement's control of the region.

The Pakistani Foreign Ministry accused India of being the source of these rumors, which it described as false.