The police drove after the mop - 16-year-old Alexander died

A police patrol is driving after a tuned moped. The journey ends in a tragic accident, in which 16-year-old Alexander Storåker dies. The rules are simple - the police can only hunt moped riders if there are special reasons. But when Assignment review takes a closer look at Alexander's case, it turns out that more young people have been involved in similar incidents with the police in the same area. 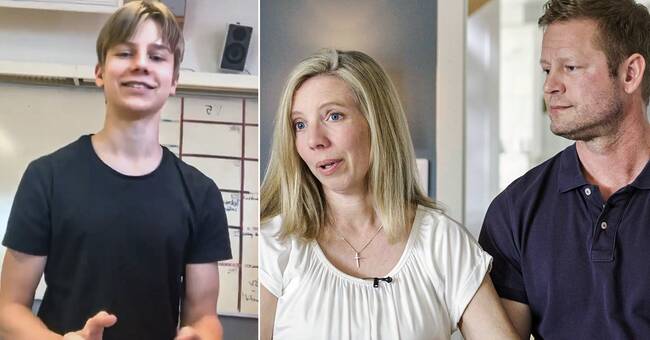 In Lerum outside Gothenburg, in May 2020, a civilian police car went out after the public complained about tuned mopeds.

The police see 16-year-old Alexander Storåker, who is driving his friend on a moped.

The boys notice that there are uniformed policemen in the civilian car and pull away.

A moment later, they meet again when the police patrol makes a U-turn towards the stationary moped.

Alexander then drives away and turns onto a footpath in a residential area.

The police follow and start a stop signal, blue light and siren.

Shortly afterwards, the mop crashes into a concrete suction.

Alexander dies from the injuries he receives in the crash.

Alexander's parents Anna and Frode Storåker are transported to the emergency room at high speed, they first do not know how serious the accident has been.

- Then the doctor comes in and the first thing Anna asks is "is he dead?".

"The police car chased the mop"

In the civilian police car that followed Alexander, there was a patrol from the Alingsås police.

Exactly how the accident happened and how much the police's actions stressed Alexander is still not clear.

The police who were driving say afterwards that he turned off the blue light and slowed down shortly after the turn onto the path.

The driver's colleague, on the other hand, states that they drove with sirens all the way to the accident site without stopping.

Alexander's parents are critical of the fact that it has been difficult to find out details about the incident, even as to what injuries the son received.

Anna Storåker says that, shortly after the accident, they were told by an investigator that the police would not look for witnesses - that they had to do it themselves.

- We got a little panicked.

Help then we, we parents in grief, must go out.

So we sat here a couple of days after the accident and wrote notes.

Hundreds of small notes that we cut up and ran around with.

That was where our mistrust started.

What is this, why not look for witnesses?

One child has died.

The police may only hunt moped riders if there are special reasons, for example if there is a suspicion of a serious crime.

A tuned moped, bus driving or driving without a helmet is not a sufficient reason.

Alexander Storåker was not suspected of any serious crime when the police drove after him.

The police state in interrogation that they only wanted to check vehicles and drivers.

After his death, three separate investigations are started into the case, which will, among other things, investigate whether Alexander committed a crime - and whether the police patrol violated the rules.

In the investigations, witnesses say that both the moped and the police car were driving at high speed on the footpath.

"But the first thought was that the police car was chasing the mop," says a witness.

Assignment review gets in touch with more young people in Lerum, who state that they have been involved in similar events as Alexander.

Two boys say that they drove away with trimmed mopeds from police patrols who then drove after them.

For one of them, the persecution ended in exactly the same place as Alexander's accident.

The other chose to stop the moped voluntarily - and was fined.

- I was damn stressed, I remember, and scared, he says.

Police: The consequences are terrible

The investigation of the police's actions in Alexander's case results in a prosecution.

The police who drove the car are suspected of misconduct and causing another person's death.

The trial will be held in October, the accused denies the crime.

Johan Lundberg is local police area chief, and responsible for the police in Alingsås.

How do you think you have acted in this case?

- If you think about the consequences of the accident, it's terrible.

In that, I can not say that it has been good, the consequences of this particular control were terrible, says Johan Lundberg, local police area manager Alingsås.

Regardless of the debt issue, the police were present at the time of the accident.

Have you learned any lessons from that?

- Yes, we always have a discussion about this, both me and my employees here;

how can we avoid this situation?

It's constantly trying, it's a second decision in this.

Johan Lundberg says that it is not his image that the police chase or pursue mopeds without any other suspicion than that they have been tuned - as the young people in Lerum testify.

- It is clear that the police have chased mopeds if you look back.

But I do not feel in the near future that we have chased mopeds in that way.

But it can certainly have happened.

I do not read everything we do in the area.