President Biden was in New York and New Jersey on Tuesday, a week after Storm Ida hit. He again promised to release the necessary funds for the repairs.… 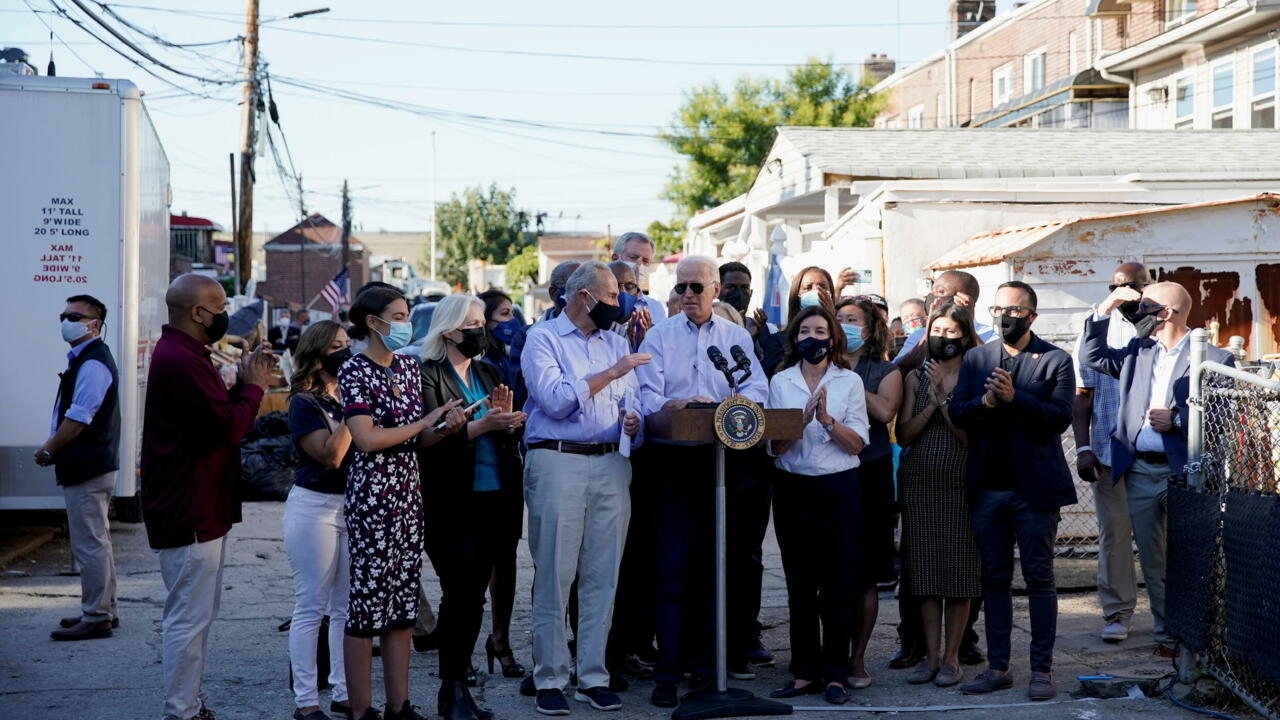 US President Joe Biden during his visit to a neighborhood affected by the remains of Hurricane Ida in Queens, New York on September 7, 2021. REUTERS - ELIZABETH FRANTZ

President Biden was in New York and New Jersey on Tuesday, a week after Storm Ida hit.

He again promised to release the necessary funds for the repairs.

But above all, he insisted on the importance of his plan for infrastructure and the fight against climate change.

In this district of Queens, the damage is still visible, a week after the passage of storm Ida.

On the sidewalk, household appliances, furniture and damaged mattresses are piled up, as our correspondent on site,

It's been like this for three days, and we cleaned up.

»Sandra Cebalas takes us to her cellar completely destroyed by the

The water was getting there,

Was the water reaching your shoulders?"

And my husband was trying to move some objects to save things, but he couldn't do anything

And it's the same with the neighbors.

Our situation was chaotic, really bad.

Everything was flooded, we lost all the material things we had

Queens has been one of the hardest hit neighborhoods in New York.

Here, all say they expect a lot from the president's visit.

I am glad that President Biden is taking up this file.

That he cares about what happened to us with this storm, yes it is good, it is really good that he is doing it,

I hope he sees the extent of the damage with his own eyes.

Some houses are completely destroyed,

The inhabitants hope in particular that work will be carried out in the streets to improve the water evacuation in the event of new storms and to avoid new floods.

"The nation and the world are in danger"

Flooding killed more than 50 people last week on the northeast coast of the United States.

After meeting the victims and seeing the enormous damage, the American president repeated his message on the dangers of climate change, reports our correspondent in Washington,

Climate change is an existential threat to our lives and to our economy,

This threat is there and it will not get better. The question is: can it be worse? We can prevent the situation from getting worse. And when I talk about building back better, I mean you can't rebuild like it was before this storm. You have to rebuild better so that if there is another storm, there is no damage. And so we have to listen to scientists, economists and our national security experts. They are all telling us that we are on red alert. The nation and the world are in danger. I am not exaggerating. It's a fact. They have been warning us for years that extreme weather events will become more and more violent. And this is what we are currently experiencing.