Municipalities are criticized - want to build on sites with flood risk

40 percent of the municipalities that have had their building plans reviewed by the County Administrative Boards are criticized for how to manage risks of floods. Several municipalities build at places with a risk of flooding, sometimes in violation of the National Board of Housing, Building and Planning's guidelines. This is shown by SVT's review. 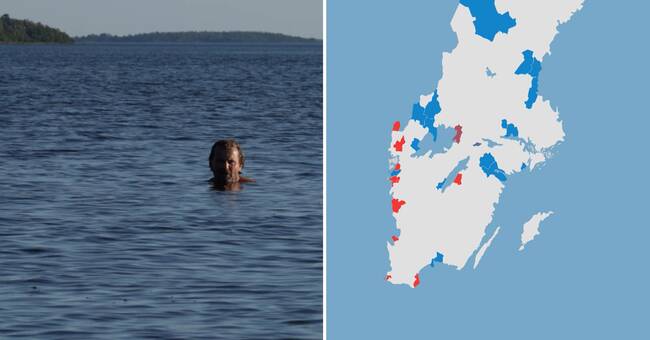 Housing with water features and lake views is something many people demand and municipalities want to offer.

But SVT's survey shows that several municipalities take risks too lightly in the event of torrential rain and floods.

Of the 37 municipalities that made new master plans in 2020, 15 received criticism for lack of climate considerations.

- Yes, it is common for us to have views on flood risks around locations close to the beach, where many municipalities want to build attractive housing, says Magnus Ahlstrand, responsible for construction planning at the County Administrative Board in Värmland.

In Vellinge municipality in Skåne, an expected sea level rise to 2065 has been taken into account, in Båstad to 2100. The county administrative boards do not think this is enough.

In Munkedal, it is said that the municipality has handled risks with elevated sea levels well when new construction is planned, but risks of torrential rain and possible landslide risks have not been investigated.

In Bollnäs, large parts of the city center are already on land that, according to current guidelines, should not be allowed to be built on.

The County Administrative Board criticizes that the municipality wants to enable continued densification with more new housing in the area.

Built in violation of guidelines

According to the law, municipalities may only build in "suitable places".

The National Board of Housing, Building and Planning's guidelines state that cohesion must not be built in places with a risk of flooding.

But SVT's review shows that new homes are still being built and planned in precisely such places.

But awareness of flood risks has increased in recent years.

Municipalities that are criticized can often adjust their master plans.

But plans are rarely stopped.

- Municipalities instead try to compromise and add certain protection measures, but in the end we use vulnerable situations today - absolutely.

Because the vulnerable situations are attractive from other aspects, says Magnus Ahlstrand.

Lack of knowledge about extreme rain

He believes that knowledge about flood risks, especially regarding heavy rainfall and extreme rain, is limited.

He also says that the forecasts are getting worse all the time and that we therefore today do not always have margins so it can be said that we are building "future-proof".

One explanation is that many municipalities are struggling to attract new residents.

Then locations close to the beach and lake views are heavy arguments to attract not least people with strong purchasing power.

- We can attract with the location - new homes near the water at prices at a completely different level than you pay in Stockholm.

We can not attract with so much else, says Fredrik Skoglund (S), chairman of the building committee in Bollnäs, one of the criticized municipalities.

Here you see methods that reduce the risks of flooding.