Ex-colleague about Magdalena Andersson: "People are afraid of her"

After Mikael Damberg has shown his support, the road is open - already this Christmas, Magdalena Andersson can be Sweden's new Prime Minister. Now several ex-colleagues testify about how her leadership style can become a problem for an S government. - Magdalena Andersson is very tough. She and Annie Lööf do not get along well, says a former top within the party. 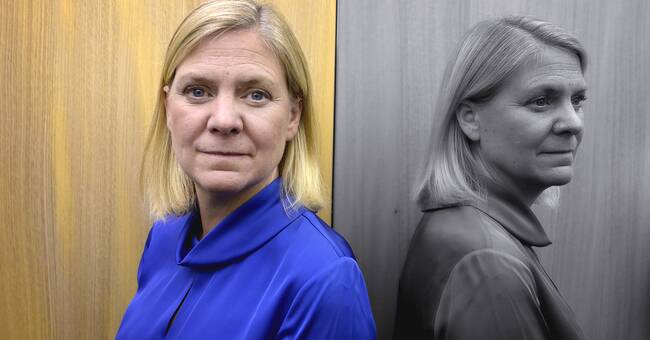 Shekarabi, Ygeman and now Mikael Damberg - all competitors for the party leadership position have now stood behind Magdalena Andersson.

At the same time, former party colleagues are worried that her tough style could lead to problems in the difficult parliamentary situation.

- People are afraid of her, says an ex-colleague.

Several former colleagues and friends describe Magdalena Andersson as a person who sees her opinions as facts and does not like to be wrong.

And it can be a problem when she takes over from Stefan Löfven.

- It can be difficult for her to reach, says SVT's Mats Knutson in Politikbyrån.

Magdalena Andersson is described as confrontational, fearless and far-sighted, but also as a warm fellow human being who cares about her colleagues.

- She wants things to be done and for people to understand what she wants.

She knows she needs this loyalty around her.

She gets frustrated easily and can be a little irrational, says one person.

- She is extremely competent.

The only thing is that she is not so charming but a bit cohesive.

But it is usually in and of itself finance ministers, says a former high-ranking S-politician.

Another former high-ranking S-politician says that Magdalena Andersson "has not bothered about it".

- But she is very tough and does not get along with Annie Lööf.

Emil Källström, former economic-political spokesperson in the Center Party, has been sitting in the negotiating room with Magdalena Andersson:

- She is clear and straight in every situation.

If she thinks she is right and that the other party is wrong - which she in principle always does - she is clear about it.

There are those who may take it badly or that there will be a bad mood.

"Did not want to greet me"

John Hassler, former chairman of the Fiscal Policy Council, experienced the "bad mood" during a meeting in 2015. He says that he was "scolded for notes" by Magdalena Andersson in connection with the presentation of a critical report.

- I've not talked to her since.

She also did not want to greet me or want to participate in any context in which I have participated.

The professor was scolded by the finance minister: "She said the report was a 'mental meltdown'"

We have sought out Magdalena Andersson who did not comment on the conflict.

The Politburo's latest episode "The Bulldozer" is about Magdalena Andersson.