First observation: Why does President Xi Jinping attach so much importance to this international economic and trade event?

"Insist on using the'golden key' of peace, development, cooperation and win-win to solve the current problems facing the world economy, international trade and investment, and create a better future together!"   On September 2, President Xi Jinping delivered a video speech at the 2021 China International Trade in Services Global Service Trade Summit, declaring China's determination to deepen re 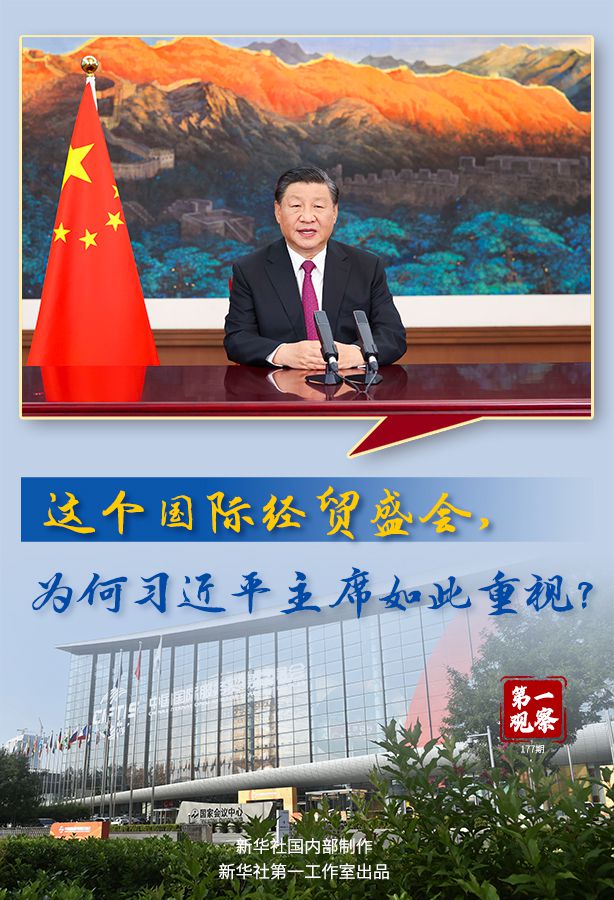 "Insist on using the'golden key' of peace, development, cooperation and win-win to solve the current problems facing the world economy, international trade and investment, and create a better future together!"

Under the epidemic situation, two consecutive years of video speeches, why did President Xi Jinping attach so much importance to this economic and trade event?

Take service trade as the engine, and make good use of the "golden key" to solve the world's economic problems——

Under the epidemic, service trade has become the most active area of ​​global trade, and the service industry has become a new growth point for the economies of all countries.

Last year, the Service Trade Conference took the theme of "Global Services, Mutual Benefits and Sharing", which coincided with the fact that the global epidemic has not yet been fully controlled, and all countries are facing the arduous task of fighting the epidemic, stabilizing the economy, and protecting the people's livelihood.

Speaking of why China organized such a major international economic and trade event, President Xi Jinping said, "It is to work hand in hand with everyone to overcome the difficulties, and jointly promote the development and prosperity of global service trade, and promote the rapid recovery of the world economy."

With the theme of "Digital Opens the Future, Services Promote Development" at the Service Trade Fair this year, the global economy has begun to recover, but the epidemic is still fluctuating.

President Xi Jinping once again emphasized, "We are willing to work with all parties to adhere to open cooperation, mutual benefit and win-win results, and share development opportunities in service trade, so as to promote the recovery and growth of the world economy."

To welcome customers from all over the world and to benefit from the whole world lies behind China's sincerity and responsibility to use the "golden key" of open cooperation and join hands with the world to create a better future.

From the "3-point initiative" to the "4 measures", it continues to declare China's high-level opening up——

Increase the level of openness, expand cooperation space, strengthen the establishment of rules in the service sector, and continue to support the innovative development of small and medium-sized enterprises-the four new measures proposed by President Xi Jinping this year have further demonstrated China's determination to move towards a higher level of openness.

Not only that, "strengthen the construction of rules in the service sector, and support Beijing and other places to carry out the first trial of international high-level free trade agreement rules." This institutional open arrangement reflects China's determination and action to connect with high standards of international economic and trade rules.

Focus on digital trade, serve the innovation and development of small and medium-sized enterprises, and deliver a clear signal that China is moving towards high-quality development——

"Number" has once again become a key word.

At the Service Trade Conference last year, President Xi Jinping proposed that we should follow the development trend of digitalization, networking, and intelligence, and work together to eliminate the "digital divide" and promote the digitalization of trade in services.

In the future, Beijing and other places will build digital trade demonstration zones.

Enterprises are the mainstay of innovation. How to stimulate the innovation power of small and medium-sized enterprises, which account for more than 90% of China's 145 million market players?

What President Xi Jinping said is an important measure to implement the national innovation-driven development strategy and continue to cultivate new drivers of development. It is also an important part of deepening the structural reform of the financial supply side and improving the multi-level capital market system.

"Digital opens up the future, and services promote development." China is injecting new momentum into the recovery of the world economy with a more open attitude and more pragmatic measures.

It is unavoidable that the epidemic has impacted the global economy and aggravated the trend of counter-globalization. Digital trade barriers still exist and hinder the normal flow of digital trade. Deepening cooperation and coordination are vital to removing obstacles and releasing innovative vitality.

The "Golden Key" is already in hand, and starting it requires all countries to join hands and work together!