"Strongly disagree": Russia responded to the statement of Ukraine and the United States about the "threat" of Nord Stream 2

Press Secretary of the Russian President Dmitry Peskov stressed that the Russian side categorically disagrees with the statement of the United States and Ukraine regarding Nord Stream 2. Earlier, Washington and Kiev called the project "a threat to European economic security." Moscow again recalled that this is an exclusively commercial project. The Federation Council noted that the positions of Washington and Kiev on "Northern Because - 2" coincided, since Ukraine wants to receive money by transporting gas through its territory, and the United States is counting on supplying its LNG to Europe. 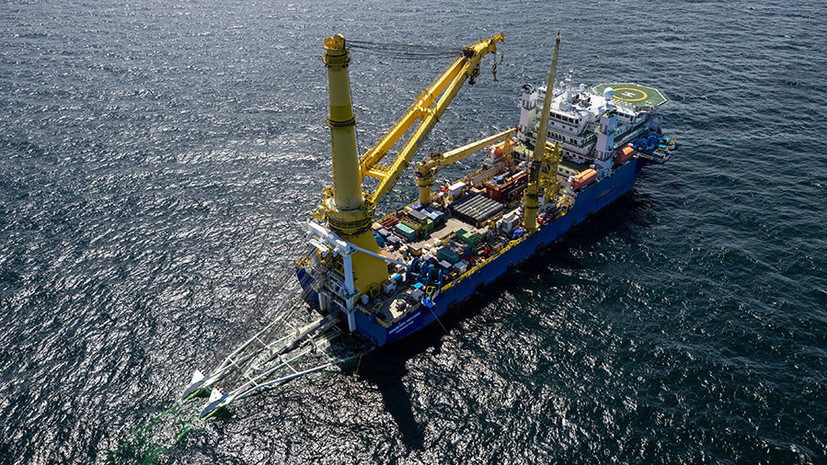 The Kremlin does not agree with the position of the United States and Ukraine on Nord Stream 2, said the press secretary of the Russian President Dmitry Peskov.

He stressed that the project cannot pose any threat.

Peskov noted that the Nord Stream 2 project is close to completion.

He also expressed hope that the gas pipeline will soon be launched and will play an important role in ensuring the energy security of Europe.

“This is an exclusively commercial project that cannot pose any threat to anyone.

We categorically disagree with the joint American-Ukrainian thesis that this project allegedly poses a threat to Ukraine and to Europe as a whole, "TASS quoted Peskov as saying.

Ukraine and the United States have previously opposed the launch of Nord Stream 2.

Washington and Kiev view the project as a threat to European energy security, according to a joint statement on strategic partnership, drawn up following a meeting between the presidents of the United States and Ukraine.

Recall that on September 1 in Washington, a meeting was held between the head of the White House Joe Biden and the President of Ukraine Volodymyr Zelensky.

According to media reports, the negotiations lasted more than two hours.

“Ukraine and the United States continue to oppose Nord Stream 2, which we regard as a threat to European energy security,” the document says.

It also claims that the governments of Ukraine and the United States support efforts "to increase capacity to supply gas to Ukraine from diversified sources."

According to the President of Ukraine, the United States will be ready to impose sanctions in case of "violation of rights" of Kiev in this area.

Sergei Tsekov, a member of the Federation Council Committee on International Affairs, believes that the real situation around the gas pipeline is opposite to the content of the statement of the United States and Ukraine.

“It's exactly the opposite.

It is the position of the United States of America and Ukraine that prevents the launch of Nord Stream 2 that threatens European energy security, "the senator said in an interview with RT.

According to him, the positions of Washington and Kiev largely coincide, since Ukraine wants to receive money by transporting gas through its territory, and the United States is counting on supplying its LNG to Europe.

“They have a complete coincidence here.

“It is clear that when at one time German business, with the support of the German authorities, decided to build the Nord Stream 2 gas pipeline, they weighed all the pros and cons, proceeding exactly from the fact that the appearance of SP-2 would increase energy security of Europe, firstly, and secondly, it will be a very attractive project for German business, "Novikov said in an interview with RT.

He stressed that Germany benefits from the project politically and economically, otherwise it would not have been implemented.

At the same time, Biden said earlier that Nord Stream 2 was almost completed, the deputy recalled.

“I think that the American side made relevant statements without much enthusiasm.

They, that is, Biden's team, have already made it clear and clear that they proceed from the fact that Nord Stream 2 will be completed and will function, "the deputy concluded.

Meanwhile, Gazprom CEO Alexei Miller said that the first gas via Nord Stream 2 could be supplied as early as 2021.

“I would like to note right away that even before the end of this year, during this heating season, we can supply the first gas via the Nord Stream 2 gas pipeline to the European market,” Miller said during a conference call.

The document signed following the meeting between Biden and Zelensky also states that the United States fully supports the "Normandy format", as well as the settlement of the conflict in eastern Ukraine in accordance with the principles of international law.

In addition, during the meeting, Biden announced his readiness to support Ukraine's sovereignty and territorial integrity "in the face of Russian aggression."

Also on russian.rt.com Zelensky commented on the meeting with Biden

The US President added that Washington supports Kiev's "Euro-Atlantic aspirations".

At the same time, the White House said that in order to join NATO, Ukraine must fulfill a number of conditions that will allow the country to meet the standards of the alliance.

“I think it's important to understand ... that this is not a decision made by the United States,” said White House spokeswoman Jen Psaki.

Psaki noted that the American side advocates an "open door" policy for joining the alliance of countries that are "ready and able to fulfill the obligations and responsibilities" associated with NATO membership.

“There are steps that Ukraine should take.

They know very well what these steps are, ”said a White House spokeswoman.

In particular, as Psaki clarified, Kiev should carry out reforms aimed at establishing the rule of law, modernizing the defense sector and increasing economic growth.