Rome, wild boars in the city: exposition of the mayor Raggi against the Lazio Region 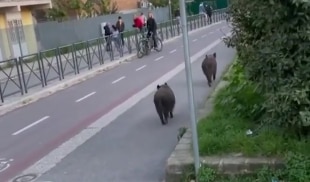 01 September 2021The mayor of Rome, Virginia Raggi, presented a complaint to the Prosecutor's Office against the Lazio Region in relation to the

"falling within the territory of Roma Capitale". Based on what has been learned, in the complaint submitted to the attention of the Capitoline magistrates it is stated that the "massive and uncontrolled presence of wild boars" in the city would be "a consequence of the failure of the Lazio Region to foresee and / or implement effective management plans. ".

The reference is to article 19 of law 157 of '92 which provides that "the Regions must provide for the control of wildlife species even in areas prohibited from hunting". In the statement, the Campidoglio also states that the Lazio Region "would also be in default of the Memorandum of Understanding signed with the Metropolitan City of Rome Capital and Rome Capital" which provides that it is precisely the regional body "that must prepare management plans in the areas falling within the territory of Roma Capitale and having to identify regional structures capable of receiving live animals, captured in the context of numerical control activities ".