A warmer climate means that downpours will become more common in the future. New high-resolution modeling from SMHI shows that they will also be more intensive. And if emissions continue to increase sharply, floods like the one in Gävle risk becoming twice as common. 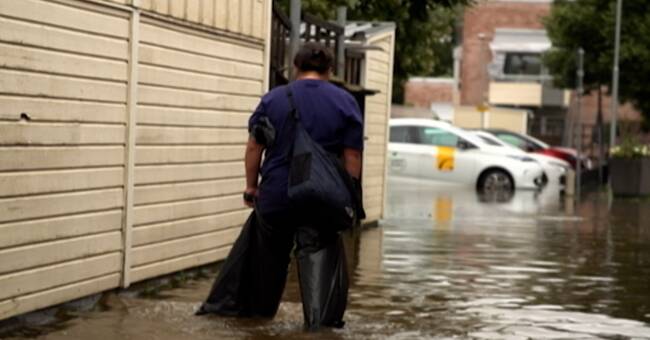 SMHI has previously assessed that the risk of torrential rain will increase in Sweden.

But new, much more detailed modeling has now made researchers even more confident.

If emissions continue to rise sharply, rainfall could be 40 percent more intense at the end of the century than today.

Hydrological models that simulate the water's path out into lakes and seas, show that floods can then become twice as common.

- What now happens every ten years would in that case happen every fourth or fifth, says Jonas Olsson, research leader at SMHI.

Earlier in August, the UN Climate Panel stated that the risk of extreme weather such as torrential rain and heat waves will become more common and that it is due to human emissions.

The climate panel was particularly sure that the rainfall would get worse over Northern Europe.

A warmer climate provides more water vapor and more energy in the atmosphere.

- There is a very clear connection there between heating and just water in the atmosphere, and thus the risk of torrential rain, says Jonas Olsson.

The emissions determine how bad it will be

It is difficult to model torrential rain.

They are unpredictable, local and short-lived.

Previous models broke down Sweden into squares of 10 square kilometers and one day.

The new ones count on one km2 and one hour.

This makes the analyzes comprehensive.

Each run on a supercomputer takes several months.

So far, SMHI has only counted on a worst-case scenario and the results are therefore preliminary.

How much worse it gets also depends on how big the emissions will be.

Lower emissions mean that rainfall does not increase as much.

- That is the hope and that is how it should be.