"Showcase of achievements and promising ideas": what was the memorable part of the business part of the forum "Army-2021"

The business program of the Army-2021 international military-technical forum ended with the signing of export contracts worth more than € 2 billion, said the head of Rosoboronexport, Alexander Mikheev. Under these agreements, Moscow's foreign partners will receive modern models of aircraft, ammunition, anti-tank weapons, air defense and electronic warfare systems. Earlier, on the fields of Army-2021, the Ministry of Defense signed contracts for the supply of weapons to the RF Armed Forces for 500 billion rubles. We are talking about, among other things, hypersonic systems, UAVs, modernized combat aircraft and attack helicopters. According to experts, the annual holding of the forum helps to strengthen the Russian army and maintain Moscow's leading positions in the global arms market. 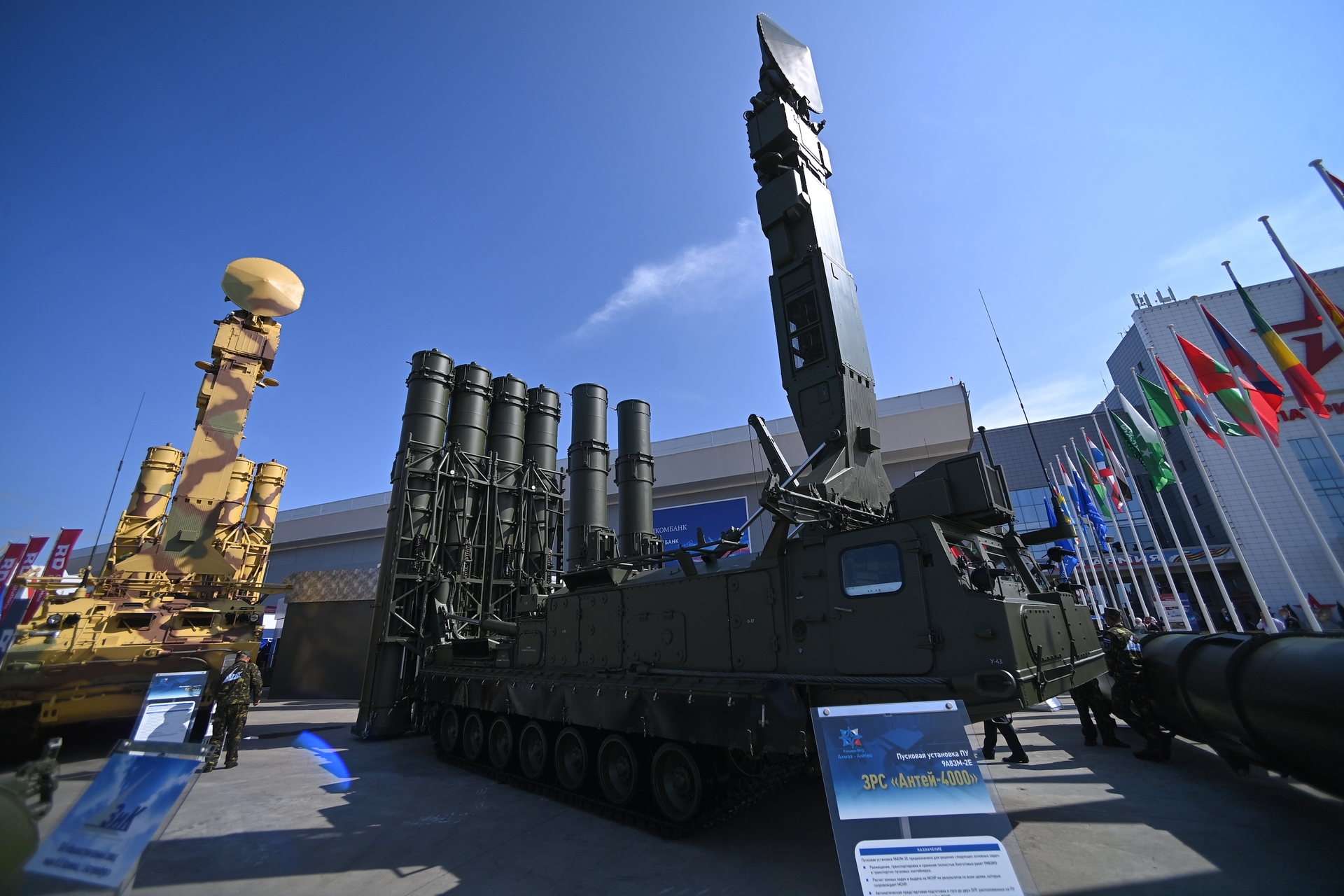 As a result of the business program of the Army-2021 international military-technical forum, Rosoboronexport held more than 70 negotiations and signed contracts with foreign countries worth more than € 2 billion, said CEO of the company Alexander Mikheev.

“Within the framework of the Army-2021 forum, Rosoboronexport, following negotiations with foreign partners, signed about 20 contract documents totaling over € 2 billion,” the press service of Rostec, which includes Rosoboronexport, quotes Mikheev.

"The agreements reached by Rosoboronexport for the supply abroad of the latest Pantsir-S1M anti-aircraft missile and cannon complex, the Krasukha electronic warfare complex and the Repellent-Patrol mobile countermeasures complex are the first export contracts for these samples," Mikheev explained.

"There is something to be proud of"

We will remind, the forum "Army-2021" began its work on August 22 in the Odintsovo district of the Moscow region.

The exposition and dynamic displays of military equipment were deployed in the Patriot convention and exhibition center, at the Kubinka airfield and the Alabino training ground.

The business program of the exhibition ended on 27 August.

On Saturday, August 28, the forum is still open to the public.

The Army-2021 exposition is divided into clusters: aviation, navy, military medicine, military construction, robotics and diversification (increasing the share of civilian products in the military-industrial complex of the Russian Federation).

In total, more than 28 thousand samples of military and dual-use products are presented at the forum.

At the Alabino training ground, the Ministry of Defense of the Russian Federation organized for foreign guests a dynamic display of military and special equipment for the ground forces, which Moscow is promoting for export.

Demonstration programs were performed by the aerobatic teams Russian Knights (on six Su-35S), Swifts (on nine MiG-29s) and Berkuts (on four Mi-28Ns).

On August 23, the President of the Russian Federation Vladimir Putin visited Army-2021.

He said that specialists from almost 100 countries had the opportunity to familiarize themselves with the novelties of the domestic defense industry.

“Many of these weapons, in terms of their tactical and technical characteristics, have no analogues in the world, and according to some samples we can firmly say that they will not have them for a long time.

According to the Russian leader, the forum's agenda includes the prospects for "deepening military-technical ties, as well as issues of cooperation in the field of defense of states."

According to the President of the Russian Federation, Moscow "has something to be proud of and something to offer its allies and partners."

As the head of state emphasized, in recent years Russia has been consistently implementing the state armament program and a long-term program for the development of the defense sector.

“I emphasize that Russian weapons have always been in demand on the world market, and today they reliably protect the security of many countries of the world, and our defense enterprises - even despite the difficulties caused by the epidemic - produce and supply export products on time,” Putin said ...

According to Rosoboronexport, for the first time in the history of military-technical cooperation between the Russian Federation and foreign states at Army-2021, an agreement was reached on the integration of the Palma anti-aircraft missile and artillery complex (ZRAK) into the armament system of a foreign ship ...

This air defense system is a modified version of the Sosna land-based complex and is serially supplied to the Russian Navy.

"Palma" was developed by the specialists of JSC "KB Precision Engineering.

Nudelman ”and other domestic enterprises.

The maximum range of the complex is 10 km, the height is 5 km.

According to the Ministry of Defense of the Russian Federation, on the fields of Army-2021, foreign guests showed particular interest in the expositions of Roscosmos, the Russian Helicopters holding, the Almaz-Antey concern, the Sozvezdie Concern JSC, the United Aircraft Corporation, the Kalashnikov concern "," Shvabe "holding and other companies.

In a commentary to RT, the director of the MGIMO Center for Military-Political Studies, Alexei Podberezkin, noted that Russia firmly holds a leading position in the international arms market.

According to the expert, the key to successful sales of military products is their high quality and adequate price.

“Moscow occupies the strongest positions in arms export in the sphere of air defense.

Of course, with the introduction of sanctions, Russia's partners in military-technical cooperation are afraid of blocking financial transactions, but export indicators indicate that sales are still carried out in large volumes, ”Podberezkin emphasized.

According to the expert, the annual forum in Kubinka plays an important role in maintaining Moscow's leading position in the global arms market.

Podberezkin believes that he allows foreign guests to get acquainted with the practical results of the development of the Russian military industry.

“Of course, various events and conferences at the Army are very effective from the point of view of the possible expansion of military-technical cooperation.

It is impossible to sell weapons without live contacts, and they are just getting better at such international exhibitions, ”Podberezkin said.

A similar point of view is shared by the head of the Bureau of Military-Political Analysis, Alexander Mikhailov.

In an interview with RT, he said that, within the framework of the Army, work was organized at a high level with existing and foreign buyers of Russian military products, especially from among Asian and Middle Eastern countries.

“The amount over € 2 billion and the range of supplies disclosed by Rosoboronexport is a very worthy result.

True, it is necessary to understand that almost all information about the military-technical cooperation sphere is of a closed nature - Russia regularly concludes a lot of other major transactions.

Therefore, the export turnover of domestic arms allows Moscow to firmly hold the second place in the market, ”Mikhailov explained.

Experts called the conclusion of new contracts for large-scale supplies of military products to the Russian armed forces as another significant result of the Army's business program.

On the sidelines of the forum in Kubinka, the Russian Defense Ministry signed more than 40 contracts with 27 enterprises for a total of 500 billion rubles.

The agreements provide for the supply of more than 1.3 thousand models of equipment to the army, repair and modernization of over 150 weapons.

Also, the Ministry of Defense ordered from the industry the modernization of the fleet of MiG-31 fighter-interceptors and Tu-95MS strategic bombers.

From the heavy weapons of the Russian army, 152-mm self-propelled artillery units (ACS) "Coalition-SV" will be transferred, from unmanned vehicles - the reconnaissance and strike UAV "Pace-RU", helicopter-type drones "Termit" and "Platform".

According to Alexander Mikhailov, "Army" is the most convenient platform for interaction between the military and representatives of the defense industry, who demonstrate their initiative developments.

“The forum in Kubinka is a showcase of the achievements and promising ideas of the domestic industry. Without a doubt, the "Army" makes a significant contribution not only to the promotion of Russian military products for export, but also to increasing the capabilities of our armed forces, "Mikhailov summed up.