The China Internet Network Information Center (CNNIC) today (August 27) released the 48th "Statistical Report on China's Internet Development Status" (hereinafter referred to as the "Report") in Beijing. The "Report" shows that as of June 2021, the number of Internet users in my country has reached 1.011 billion, an increase of 21.75 million from December 2020, and the Internet penetration rate 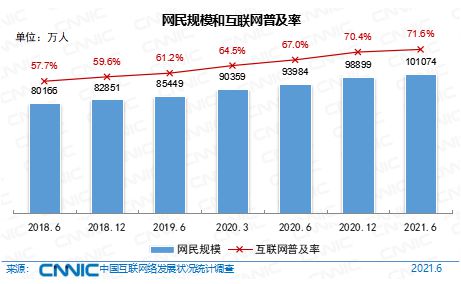 One billion users access the Internet, forming the world's largest and most vibrant digital society.

The number of netizens exceeds one billion

, and the huge scale of netizens provides a strong endogenous driving force for the high-quality development of China's economy.

The first is to accelerate the construction of basic Internet resources to lay a solid foundation for the growth of netizens.

The report shows that as of June 2021, the average weekly online time for Chinese netizens is 26.9 hours, an increase of 0.7 hours from December 2020.

number of addresses up to

growth at the end

The second is that the basic services of digital applications are becoming more abundant, driving more Internet users to use them.

The third is the continuous improvement of government services and the acceleration of user habits.

During the epidemic, the national integrated government service platform launched more than 700 high-frequency service services such as return-to-work employment, online recruitment, and online tax processing, intensified efforts to coordinate the construction of government affairs informatization, and continuously improved the well-being of the people.

One is that my country has the world's largest information and communication network.

As of April 2021, the proportion of fiber optic broadband users in my country has increased to 94%, the end-to-end user experience speed of fixed broadband has reached 51.2Mbps, and the mobile network speed ranks fourth among 139 countries and regions in the world.

As of May 2021, China's 5G standard-essential patent declarations accounted for more than 38%, ranking first in the world

; 5G application innovation cases have exceeded 9,000, and 5G is rapidly integrating into thousands of industries and presenting various forms, and has formed a system leading edge.

The third is the basic formation of the industrial Internet platform system of "comprehensiveness + distinctiveness + professionalism".

As of June 2021, the number of rural Internet users in China is 297 million, and the Internet penetration rate in rural areas is 59.2%

The ratio of optical fiber and 4G in administrative villages both exceeded 99%. Rural and urban "same network and same speed", the digital gap between urban and rural areas has been significantly reduced, and it is expected that the administrative villages without broadband access will be dynamically cleared by the end of the year.

With the improvement of digital applications, the vast sinking market gradually enjoys the convenience and benefits brought by digitalization.

Since 2020, relevant departments have vigorously promoted the ageing level of Internet applications and the universal accessibility of special groups.

The General Office of the State Council has issued the "Implementation Plan on Effectively Solving the Difficulties of the Elderly in Using Intelligent Technology", and the Ministry of Industry and Information Technology has issued the "Special Action Plan for the Ageing and Accessibility of Internet Applications",

proposing to give priority to the promotion of 115 websites and 43 APPs. Adapting to ageing transformation,

focusing on solving the difficulties encountered by the elderly and the disabled in the face of intelligent technology.

At the same time, Internet companies and all sectors of society have responded actively to speed up the resolution of the difficulties of the elderly without a health code, such as difficulty in traveling and inaccessible medical treatment. The aging-related functions of the health code have covered at least 30 million elderly people across the country. Technology and Internet companies are in the map and news. Open barrier-free functions for the disabled in other applications, and promote the achievements of scientific and technological innovation to benefit the whole people.

online food delivery users in China has reached 469 million, an increase of 49.76 million from December 2020,

and the growth rate is the most obvious among various survey applications.

Since the epidemic, the immediate delivery business represented by fresh food and medicines has developed rapidly, and together with food delivery services have helped people's livelihood and stabilized the economy.

Along with the retail consumption habits that users have gradually developed during the epidemic, the proportion of various non-catering takeaway businesses is expanding, and the coverage of the takeaway industry continues to be enriched.

online office users in China has reached 381 million, an increase of 35.06 million from December 2020, and the utilization rate of Internet users is 37.7%.

Online office segmentation applications continue to develop, and the utilization rate of online video/teleconference and online document collaborative editing is 23.8%.

On the one hand, as the digital transformation of enterprises continues to advance, the flexible working model represented by online office will continue to innovate and develop.

On the other hand, with the continuous acceleration of the construction of new infrastructure represented by 5G, big data, Internet of Things, artificial intelligence, etc., the response speed, storage capacity, functional applicability and other services of online office services such as online meetings and document editing Performance will continue to improve.

online medical users in China has reached 239 million, an increase of 24.53 million from December 2020, accounting for 23.7% of the total Internet users.

From Internet hospitals to identifying common and chronic disease patients, medical insurance reimbursements are available for Internet consultations, from online sales of drugs to core diagnosis and treatment to Internet medical insurance, various localities have actively supported the overall development of online medical care through corresponding plans, and consolidated the growth of online medical users. Base.

As the size of the silver-haired group in my country grows year by year, attention to health services for the elderly has become a key direction for Internet platforms to enter the field of online medical care.

In addition, intelligent elderly care continues to develop, and smart devices have become a new breakthrough in the development of this field.