Juventus and Ronaldo, it's breaking. Allegri: "Cristiano has no intention of staying"

"I'm not disappointed, he made his choice," the coach said at a press conference. "Sivori, Platini, Del Piero, Zidane, Buffon have passed to Juve, it's a law of life. Juve remains" 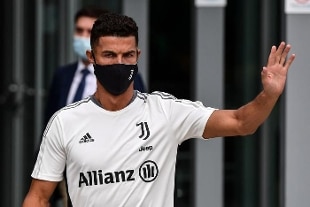 27 August 2021 The break between Ronaldo and Juventus was widely in the air but today confirmation arrives. "Before you ask me questions: yesterday Cristiano informed me that he has no intention of staying", announces the Juventus coach. "He did not train today, he will not be called up tomorrow", said Massimiliano Allegri at the press conference.

"I'm not disappointed, he made his choice", continues the coach. "Sivori, Platini, Del Piero, Zidane, Buffon have passed to Juve, it is a law of life. Juve remains, which is the most important thing, the solid basis for obtaining results. It has given its contribution, now he goes away. I wish him all the luck in the world where he will play, he is a great champion, there is only to thank him for what he gave to Juventus. Life goes on".

"The boys are already all responsible, with his absence they will be even more responsible. The difference will make the faster we get to a right mental balance that allows us to win the games".

"Welcome to Ronchester": the crasis between Ronaldo and Manchester is the title that stands out on the English Daily Mail to greet the possible arrival of CR7 at City. All the English media give great space to the negotiations with Juve. Agent Jorge Mendes would be working to facilitate an agreement between the English club and the bianconeri who are asking for at least 25 million to let go of the five-time Ballon d'Or. For CR7 it would be the return to the city that had consecrated him, with United on the other side of Old Trafford, between 2003 and 2009.

Ronaldo has already left Continassa. CR7, in fact, has left the Juventus headquarters, a sign that its future is increasingly outlined: we are moving towards farewell, even if Juventus is waiting for an offer: Juve is asking for a sum between 25 and 30 million. euro or the inclusion of Gabriel Jesus in the deal which, however, appears unlikely.