"Irresponsible statement": Russia reacted to the words of the head of Naftogaz on sanctions against Nord Stream 2

Moscow considered the statement of the head of Naftogaz Ukrainy, Yuriy Vitrenko, to be irresponsible. Senator Volodymyr Dzhabarov noted that Germany and a number of other countries interested in the gas pipeline insist on its early launch, while Ukraine, due to such rhetoric, could lose its support. In turn, in the State Duma, Kiev's position was called "groveling." 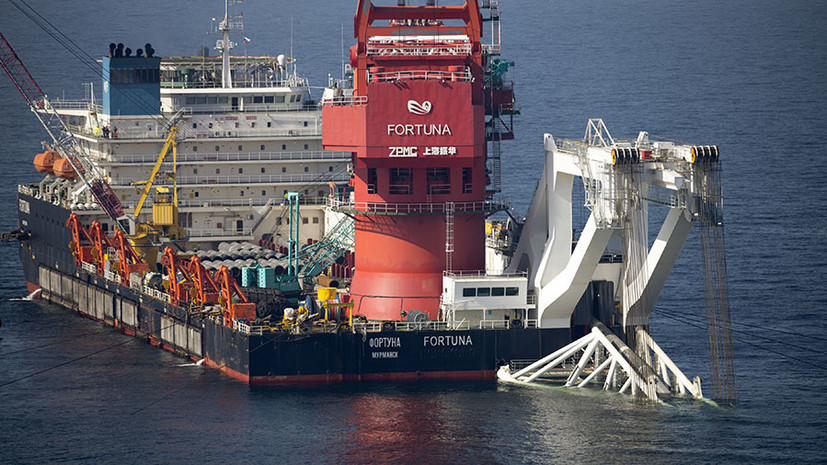 Russia called the statement of the head of Naftogaz Ukraine, Yuriy Vitrenko, about new sanctions against the operator of Nord Stream 2, Nord Stream AG, irresponsible.

This opinion, in particular, was expressed by the first deputy head of the international committee of the Federation Council Vladimir Dzhabarov.

“I think this is an absolutely irresponsible statement.

They are just getting nervous ... How can you negotiate with a country and sell your gas to it, transport it if the country is trying to punish the supplier of this gas? "

- said the senator in an interview with RT.

In his opinion, Ukraine must decide: either to consider Russia an "enemy" and refuse to transport gas through its territory, or "behave with dignity."

According to him, Russian President Vladimir Putin has repeatedly said that Russia is not opposed to maintaining gas transit through Ukraine.

“Both Germany and other European countries that are interested in Nord Stream 2 will insist on its fastest commissioning, and Ukraine could lose everything because of this behavior.

The time will come when no one wants to talk to her on this topic at all, ”concluded Dzhabarov.

Earlier, the head of Naftogaz Ukraine, Yuriy Vitrenko, said that Kiev would ask the United States to impose sanctions against the Nord Stream 2 operator, Nord Stream AG, if the German regulator allows the pipeline to operate.

“Even if we imagine that the German regulator will turn a blind eye to the violation of European legislation, then we expect that we will insist on this, as Mr. Foreign Minister Dmitry Kuleba said, we will do it very, very loudly so that the Americans then impose sanctions ", - Vitrenko said in an interview with the Ukrainian TV channel" 24 ".

State Duma deputy Ruslan Balbek ironically suggested that in the future the expression "demand of Kiev" will appear in everyday life, which means "an impudent demand of obviously impracticable conditions."

“The post-Maidan governments of Ukraine have already become famous all over the world for their conclusions about how everyone should live and how much and who owes the Ukrainian state.

Well, loud appeals to the United States are from the category: they don't let them in the door, I'll crawl through the crack, "the deputy said in an interview with RT.

Stanislav Mitrakhovich, a leading expert of the National Energy Security Fund, lecturer at the Financial University under the Russian government, in an interview with RT, noted that Vitrenko had previously resorted to sanctions rhetoric, but it did not bring results.

The expert doubted that this situation is now capable of changing.

“It turns out that Vitrenko, represented by Kiev, is complaining to Washington about Berlin.

That is, this is some kind of denunciation that Germany may not like at all, ”the expert said in an interview with RT.

Mitrahovic also recalled that the head of the White House, Joe Biden, had previously decided not to impose further sanctions against Nord Stream 2, calling them counterproductive for relations between the United States and Europe.

On Wednesday, August 25, the Supreme Land Court of Dusseldorf on Wednesday announced the decision not to exempt Nord Stream 2 from the provisions of the EU Gas Directive.

Thus, the court dismissed the complaint filed by the highway operator against the earlier decision of the Federal Network Agency (FSA) of Germany.

Also on russian.rt.com The Union of Oil and Gas Producers commented on the decision of the Federal Republic of Germany court on Nord Stream 2

In May 2020, the FSA has already rejected the application of the Nord Stream 2 operator to exempt the construction of the pipeline from the requirements of the EU Gas Directive.

Then it was noted that a positive decision was possible only if the construction of the highway was completed by May 23, 2019.

In response to the FSA's decision, Nord Stream 2 AG insisted that the pipeline was completed in terms of economic functionality.

In particular, the company drew attention to the "irretrievable investments in the amount of billions of euros", which were made before the plans of the European Commission to revise the Gas Directive.

Igor Yushkov, an expert at the Financial University under the Russian government, a leading analyst at the National Energy Security Fund, in an interview with RT, called the court decision in Germany expected and noted that there is a way out of this situation.

“Transfer ownership of gas at the last section of the gas pipeline. Thus, 27.5 billion cubic meters will be pumped by Gazprom (this will be its property) and the same amount will be pumped by European companies. That is, he will transfer the ownership right to them and thus fulfill the antimonopoly legislation - and in total the gas pipeline will be loaded by 100% (by 55 billion cubic meters), "the expert explained in an interview with RT.