Vatican: the Pope removes the bishop of Solsona, Monsignor Gomà spoke out against gays

The offending sentence: "I wonder if the growing phenomenon of confusion about the sexual orientation of many adolescents should not be attributed in Western culture to the father figure, who has been absent, deviated and emptied" 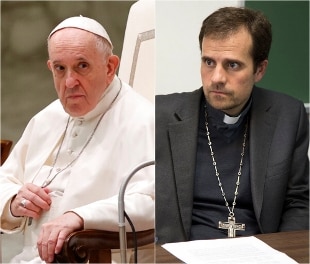 Gomà went to the headlines for having said that homosexuals would be gay because they do not have a father figure: '' I wonder if the growing phenomenon of confusion about the sexual orientation of many adolescents should not be attributed in Western culture to the father figure, who it has been absent, diverted and emptied. Until manhood itself was questioned. ''

This was announced by a Bulletin of the Holy See Press Office.

Monsignor Novell Gomà, 52, presented his resignation for "strictly personal reasons", says the diocese of Solsona. Novell Gomà was appointed bishop of Solsona by Benedict XVI on November 3, 2010, becoming the youngest bishop of Spain and the eighth in the world at the age of 41. In recent years he has been at the center of some controversy for his claims about gays. On 30 May 2017, the municipal council of Cevera (Spanish municipality of Catalonia) declared him an unwelcome person.

The previous Sunday, May 28, he had had to leave the parish church of Santa Maria de l'Alba in Tarrega, escorted by Mossos d'Esquadra, the local police and some parishioners, after some LGBT activists had organized a demonstration against he. The municipal councils of Tarrega and Mollerussa, which are part of his diocese, had rejected a visit from him.

On May 29, the mayor of Solsona, David Rodriguez, classified the bishop's statements as "unfortunate" and said he had contacted Novell to ask for a rectification. On June 1, Bishop Novell apologized "to the parents of homosexuals who have felt ill because of his statements", stating that he never wanted to offend anyone. However, he warned that "he would continue to fearlessly present the Christian vision of the person and the moral consequences that derive from it".

Furthermore, Monsignor Novell Gomà was criticized in 2013 for his positions regarding the independence of Catalonia. In September 2013 he advised the parish priests of his diocese not to participate in the "bell ringing campaign" that was to accompany the Via Catalana of 11 September. This sparked numerous protests. In an article published on Sunday 7 September 2014, immediately preceding the celebration of the Day, the diocese of Solsona defended the right of the Catalans to decide and the legitimacy of the request and called the faithful to vote, ensuring that Catalonia "meets the elements that the doctrine of the Church indicates for the reality of a nation: culture, language and history ".

Although the bishop did not take the direction of the vote, he invited the citizens "not to remain extraneous to this process" and asked them that "with a democratic and peaceful spirit, they would calmly choose the option they consider best for the good of Catalonia. ". Novell defended the freedom of the Church "in respecting any political position, as well as the moral legitimacy of the right to decide on the citizens of Catalonia".

For these statements, the Catalan Popular Party asked the Spanish Bishops' Conference to act against him for observations "clearly unacceptable within the margin of freedom of expression and which do not correspond to ecclesiastical authority". Before the Catalan parliamentary elections of 27 September 2015, in an article published in the diocesan weekly, however, Monsignor Novell Gomà clearly expressed his support for the options in favor of the independence of Catalonia.