"Many of the weapons have no analogues": Putin praised the Russian defense industry at the opening of the Army-2021 forum

Domestic weapons have no analogues in the world in terms of their tactical and technical characteristics. This was stated by Vladimir Putin at the opening of the Army-2021 forum and the International Army Games in the Patriot Park in Kubinka. In addition, he noted that the share of modern weapons in the strategic nuclear forces exceeds 80%, and also launched the laying of six warships, including two nuclear missile carriers. According to Putin, by 2027 the number of modern VFM ships should reach 70%. 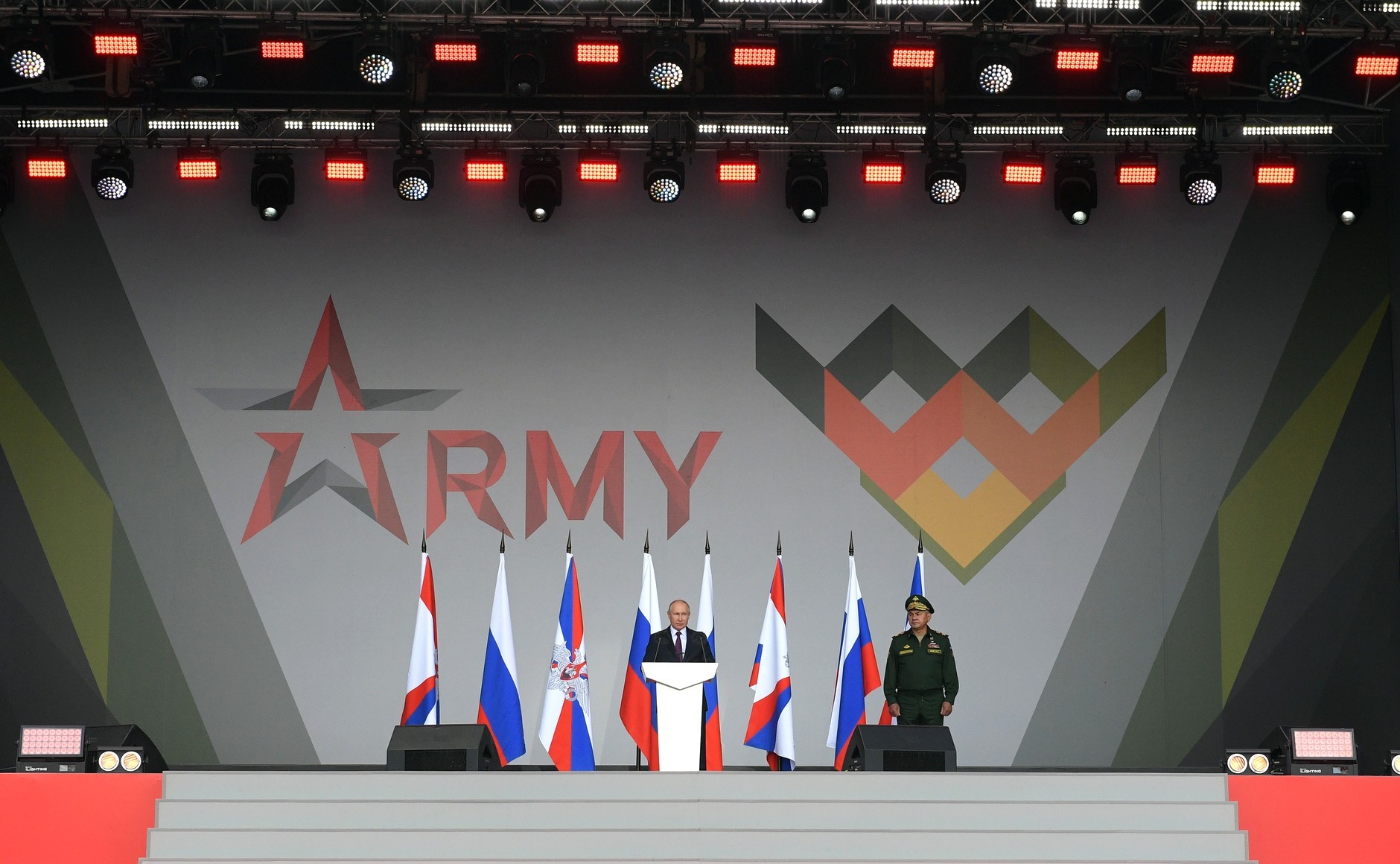 At the opening of the Army 2021 forum and the International Army Games in the Patriot Park (Kubinka), Russian President Vladimir Putin spoke about the uniqueness of Russian weapons.

In particular, he pointed out that some samples have no analogues in the world, among which he named the Kinzhal hypersonic missile system and the Okhotnik long-range unmanned aerial vehicle.

“Many of these weapons have no analogues in the world in terms of their tactical and technical characteristics, and according to some samples, we can firmly say that they will not have them for a long time,” Putin said.

In addition, he pointed to the constant modernization of the armed forces, citing as an example the update in the strategic nuclear forces (SNF).

“The share of modern weapons in the strategic nuclear forces already exceeds 80%.

This is more than in other nuclear countries in the world.

It is clear that this is not relevant for everyone, but it is important for us and shows the level of development of our armed forces and the capabilities of our science and technology, ”the Russian President noted.

Strategic nuclear forces are designed to contain aggression and defeat strategic enemy targets in a war.

As military expert Yuri Knutov pointed out in an interview with RT, the replacement of Russian equipment by 80-85% in the strategic missile forces is expected in the near future.

“In particular, instead of the Topl complexes, Yarsy and Sarmat missiles will be delivered.

At the opening of the forum, Putin also stressed that the Russian military-industrial complex and the armed forces are developing on a new technological base.

“Therefore, we will pay considerable attention at the forum to such areas as the use of artificial intelligence and robotics in the troops, the latest communication and control systems,” Putin said.

In particular, the head of the Russian Ministry of Defense Sergei Shoigu previously announced that the department at the forum plans to conclude contracts for the supply of robotic fire extinguishing systems "Uran-14", created by the Krasnogorsk enterprise "766 Management of production and technological equipment" ("766 UPTK"). Also, he said, "Army - 2021" will demonstrate combat robots, intelligence robots, mine clearance robots and for work in hazardous environments.

“Contracts will be signed for the supply of Uran-14 robotic systems, remote mining systems, artillery systems and heavy flamethrower systems, special equipment for the Ground Forces, T-90M tanks and for the modernization of T-90 tanks.

We will sign a contract for the construction of reconnaissance ships and minesweepers, for the supply and modernization of aircraft, for the purchase of high-precision weapons, "the minister said in an interview with Krasnaya Zvezda.

Experts note that in the line of robots of the company "766 UPTK" there is also a combat vehicle - "Uran-9".

Its tasks include the protection of personnel and their withdrawal from enemy fire.

The device is equipped with anti-tank guided missiles "Attack", a 30-mm automatic cannon 2A72 and a 7.62-mm machine gun.

Another batch of 20 Uranov-9s was delivered to the Ministry of Defense in April 2021.

Another example of robotization of the armed forces can be called the Impact complex, which can not only autonomously move around the battlefield, but also interact with drones and light robots designed for reconnaissance, undermining targets, transporting goods and evacuating the wounded.

The vehicle was created at JSC VNII Signal (Kovrov) on the basis of the BMP-3 and is equipped with a machine gun, a 30-mm 2A42 automatic cannon and a Kornet missile system.

According to Knutov, Russia has recently made a colossal breakthrough in the field of unmanned aircraft and robotics.

“Interesting is the Hunter and Pacer drone, which is an improved version of the American MQ-9 Reaper drone.

The promising Grom drone is also attractive; it is presented at the forum in a mock version.

This is an exceptional vehicle that will accompany ordinary Russian aircraft and, if necessary, break through the enemy's air defenses, ”the expert said.

In addition, he noted the Lightning project - a swarm of drones that will be used by the Il-76 aircraft and fight against enemy air defense systems, as well as the Penicillin sound-thermal reconnaissance complex.

“This installation cannot be identified and neutralized by means of electronic suppression.

These are technologies of tomorrow, which not every country is able to create or afford to spend on them, "Knutov added.

A powerful fleet for a strong Russia

According to Vladimir Putin, another branch of the Armed Forces that is undergoing gradual modernization and capacity building is the Navy.

“Thus, at the leading shipyards of Russia, two modern ships of the near sea zone and four new submarines, including two nuclear missile carriers, are being laid,” the president said.

He announced the start of shipbuilding after the opening of Army 2021 via videoconference, giving command to the leading shipbuilding enterprises of Russia - Sevmash in Severodvinsk, Admiralty Shipyards in St. Petersburg and Amur Shipyard in Komsomolsk-on-Amur.

“We preserve the glorious traditions of the Russian fleet, strengthen the continuity of the inseparable thousand-year history of Russia, so two new nuclear-powered submarines will bear the names of Dmitry Donskoy in Prince Potemkin as a sign of deep respect and memory for the exploits of our outstanding ancestors,” Putin said.

He also noted that two large diesel boats received their names in honor of the cities of Mozhaisk and Yakutsk, and two multipurpose ships were named “traditional for the Russian fleet” - “Grozny” and “Buyny”.

Putin also noted that all ships will be equipped with the latest precision weapons, control and communications equipment, the effectiveness of most of which has been "confirmed by the performance of combat missions in Syria."

Today, he plays a key role in the state security system, reliably protects our national interests, and makes a significant contribution to strengthening strategic parity in international stability, "the Russian leader explained.

According to him, the large-scale tasks of the Navy are due to the "geopolitical position of the country and its role in world affairs."

Putin also stressed that by 2027 the share of modern ships in the navy should reach 70%.

Experts emphasize that thanks to the above efforts, the Russian fleet will soon outstrip the fleets of other countries in terms of equipment and modernity.

“The construction of two Borei-A nuclear-powered submarines with Bulava missiles, two Varshavyanka-class submarines, and two corvettes to be used in the ocean demonstrates that Russia is resolutely engaged in naval development.

If everything goes as planned, by 2027 the Russian fleet will outstrip all the world's fleets, ”noted Yuri Knutov.

According to him, Russia is inferior to the same United States only in the number of ships, while in terms of firepower it is far ahead.

Dmitry Litovkin, editor of the newspaper Nezavisimoye Voennoye Obozreniye, spoke in the same vein, noting that Russia has safely survived the period in its history when it cut ships and left almost all regions of the world's oceans, and is now closing the gap.

“A modern powerful state cannot exist without a navy.

He is a projection of both military power and simply a demonstration of the political capabilities and intentions of the state.

Today, Russia can send its ships to various points of the world's oceans to protect its allies, maintain peace or resolve other important security issues, ”Litovkin said in an interview with RT.

He noted that Russia currently has several points of material support for the fleet, which will eventually become naval bases one day, as well as powerful weapons.

"It is enough to say" Zircon "(a Russian hypersonic anti-ship cruise missile, the speed characteristics of which make it inaccessible to existing enemy missile defense systems. -

), so that everyone in the West immediately began to stir," the expert added.

In general, as Putin noted at the opening ceremony of the Army 2021 forum, “Russia has something to be proud of, what to offer to allies and partners” in the field of the military-industrial complex.

According to him, Russian enterprises and defense industry organizations that fulfill the state defense order of the Russian Federation reliably ensure the supply of weapons and equipment not only for the domestic army and navy, but also "are ready for international cooperation in the development and production of modern weapons."

"Russian weapons have always been in demand on the world market and today they reliably protect the security of many countries of the world, and our defense enterprises, despite the difficulties caused by the epidemic, produce and supply export products on time," the head of state emphasized.

As Yuri Knutov noted, this year at Army 2021 there are many new defense industry products that may be of interest to foreign customers, and the most innovative ones are located in closed pavilions, where they are allowed only with special passes.

“Despite the pandemic, several dozen delegations arrived, even from Jordan, which is a success,” the expert said, stressing that contracts worth 500 billion rubles are expected to be concluded.

Earlier this amount was named by Russian Defense Minister Sergei Shoigu, noting that it is planned to sign 45 state contracts.

Knutov also suggested that among those who wish to conclude contracts with Russia will be countries such as India, Turkey, Algeria, Egypt, Vietnam, as well as the countries of Southeast Asia and the Pacific region.

“In general, Russian equipment is bought with pleasure by countries that are pursuing a course independent of the US and NATO, because its price-quality ratio is the best in the world,” the expert summed up.