Millions of Americans are warned as new hurricane Henri approaches

Hurricane Henri, which intensified from a tropical storm across the Atlantic on Saturday morning, is approaching the northeast coast of the United States and is expected to reach land on Sunday. Governor Andrew Cuomo is appealing to New Yorkers to seek refuge as soon as possible. 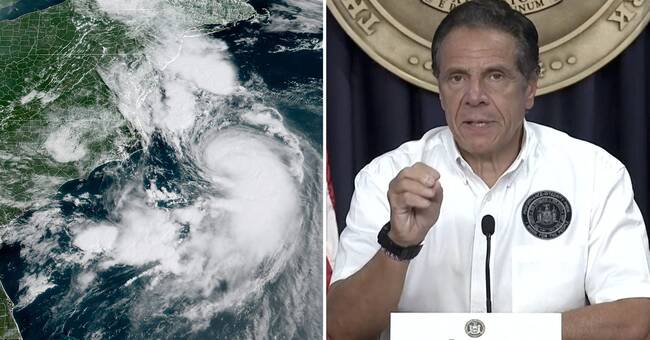 While New York City is holding an outdoor concert in Central Park for vaccinated and tested people on Saturday night, Hurricane Henri is approaching from the east.

Large areas are already saturated by the latest rain and therefore a large negative effect is expected when Henri arrives.

From New York in the south to Maine in the north, the population is gearing up to protect themselves against Henri, who reached hurricane strength on Saturday.

If the winds do not subside in strength, Henri will be the first hurricane to hit the New England area in over 30 years, when it is expected to reach land on Sunday.

The risk is greatest in Massachusetts.

New York is under threat

"We will see power outages and falling trees, even after the storm is over," said Deanne Criswell, administrator of the Federal Crisis Management Agency.

New York Governor Andrew Cuomo appeals at the last minute to city residents to prepare and warns that Henry's impact could be as great as previous superstorm Sandy 2012.

- If you have to move, bunker up, get to higher ground, it has to happen today, please.

On Saturday afternoon, the storm gathered strength with winds measured up to 33.5 m / s.

More than 42 million people in the region were during a hurricane or tropical storm warning on Saturday.

The hurricane struck Mexico a second time on Saturday.

Heavy rains and strong winds are causing floods and power outages in the state of Veracruz.

The storm, which oscillates between hurricane and tropical storm, swept across the Yucatan Peninsula as early as Thursday, causing widespread power outages and mass evacuations, without reaping any casualties.

Degraded to tropical storms, Grace then moved into the Gulf of Mexico.

But there, Grace - who has also created storms in Haiti and Jamaica - has gained new strength.