"Expropriation of private property": how Kiev is going to forcibly alienate border plots of land

President of Ukraine Volodymyr Zelenskyy signed a decree on the implementation of the NSDC decision, including the compulsory alienation of land and real estate 30-50 meters from the border with their subsequent transfer to the State Border Service. The document requires the government and local authorities to conduct an inventory of such sites and determine their owners within six months. According to experts, Kiev's measures can be regarded as an attempt to put pressure on Russia, but in reality the innovations will result in an infringement of the rights of Ukrainian citizens. 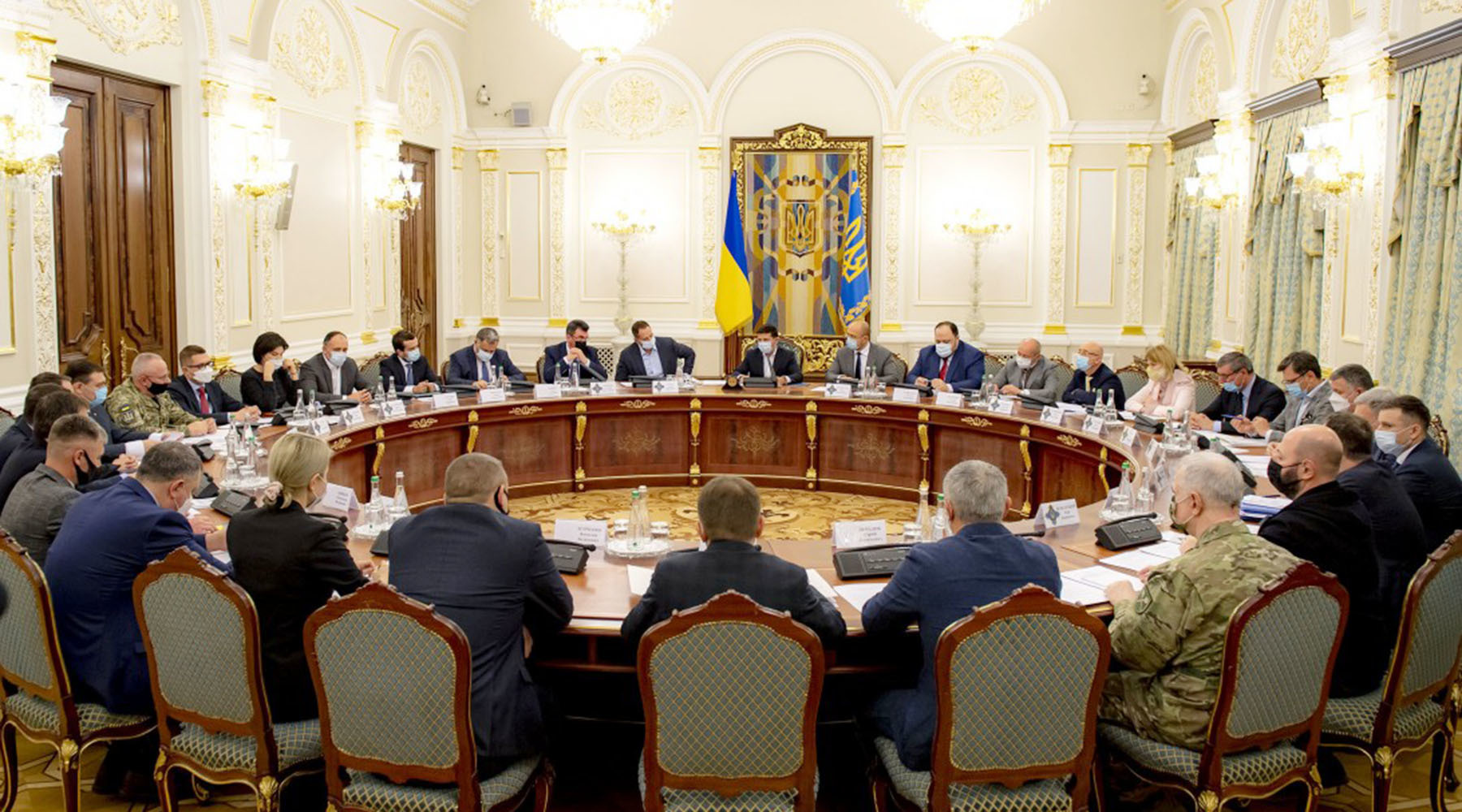 President of Ukraine Volodymyr Zelenskyy signed a decree on the enactment of the decision of the National Security and Defense Council (NSDC), including the compulsory alienation of border plots of land and real estate with their subsequent transfer to the State Border Service of the country. The corresponding document was published on the website of the Ukrainian leader's office.

“To take measures for compulsory alienation with the aim of further transfer of land plots (or parts thereof) and real estate objects (or parts thereof) located on them, owned by legal entities and individuals and located within land plots with a width of 30-50 m along the line of the state border on land, on the banks of the Ukrainian part of the border river, lake or other body of water, in case of failure to reach agreement with the owners of these land plots and the real estate objects located on them on their redemption, " decree.

It will also be clarified that the government of Ukraine has been instructed, together with local authorities, to carry out an inventory of these land plots within six months, as well as to determine the owners and users of these territories, their intended purpose and forms of ownership.

In addition, the decree says that the Cabinet needs to develop with the participation of local authorities and approve a state target program for the development of the state border, providing in the country's budget the necessary costs for the implementation of the initiative.

As specified, we are talking, in particular, about the "completion of the legal and contractual registration of the state border" and its arrangement, the installation of border signs and clearings, the construction of engineering and technical and fortifications, fences and communications of the State Border Service of Ukraine.

In addition, it is said about the need to strengthen the banks of the Ukrainian part of border water bodies, return their channel "to its original position in accordance with the documents specified in international treaties on the regime of the state border, and ensure the stability of the line of the state border of Ukraine passing along a river (stream), lake or another body of water ".

In addition, a number of items from the instructions to the government have the designation "secret".

At the same time, the need for the measures listed in the decree is explained by the threats to the national security of Ukraine in the field of protecting the state border, associated with "the incompleteness of its legal and contractual registration, improper arrangement of the border infrastructure and the maintenance of the state border."

As explained in the text of the document, it is aimed at fulfilling the tasks defined by the National Security Strategy of Ukraine (approved by Zelensky in September 2020), “to develop and improve the nationwide system for protecting the state border, in particular the implementation of European standards of border security, coordinated activities of state bodies of Ukraine and military units for the systemic development of integrated border management ”.

Let us recall that the issue of state borders and ensuring their security was raised by Kiev earlier.

So, at the end of July, during an off-site meeting of the NSDC, Volodymyr Zelensky said that all borders of the country must meet certain requirements.

In October 2020, he said that thanks to the efforts of Ukrainian intelligence, Kiev "knows about the plans of the enemy, in particular about the impending provocations on the state border of Ukraine and attempts to violate it."

During his trip to the east of the country in November last year, Zelensky said that much needs to be done to modernize Ukraine's borders, providing them with all the technical and information tools "to defend against the enemy."

“There should not be a single weak point on the border.

For us, this is not just a matter of economics and countering smuggling.

This is a strategic issue for Ukraine's national security.

And we are almost the only ones in Europe who really know how to counteract such threats, ”the office of the Ukrainian leader quoted him as saying.

Zelensky also argued that Ukraine will resume control over the border section "in Donetsk and Luhansk regions in full".

“This is a necessary prerequisite for the safe deployment of the subsequent positive political process in Donetsk and Lugansk.

It is our border guards who will be the ones who will testify that the de-occupation of certain areas of the Donetsk and Luhansk regions has taken place in full, ”he said, urging the State Border Service“ to prepare for this day ”.

"Will not give any result"

As Vladimir Shapovalov, deputy director of the Institute of History and Politics of the Moscow State Pedagogical University, noted in an interview with RT, Kiev's measures to forcibly alienate border plots of land with their subsequent transfer to the State Border Service of Ukraine, as well as other innovations, can be regarded as an attempt to put pressure on Russia.

“This indicates a manifestation of some hostility in the actions of Kiev in relation to the Russian Federation.

It is clear that Ukraine also borders with other countries, but the NSDC decision refers to the threats to which Kiev traditionally ranks Moscow.

In addition, the transfer of border plots of land and real estate to the State Border Service is very similar to measures within the framework of military preparations.

And all this against the background of the fact that Kiev is deliberately feeding the formation of the image of Russia as an enemy in society, trying to aggravate the situation, "the expert stated.

According to a RT source in the Ministry of Defense of Ukraine, due to "clear borders" Kiev wants to fight smuggling, as well as "increase pressure on opponents."

“We demonstrate that this is our territory and we intend to defend it.

The laws allow for the confiscation of property of the population and legal entities in favor of the state, so there will be no problems with this, ”he said.

However, in reality, such innovations will turn out to be nothing more than a violation of the interests of Ukrainian citizens, Shapovalov is sure.

“After all, we are talking about the fact that for some mythical purposes that do not stem from the national interests of the Ukrainian people, Zelensky actually goes to the expropriation of the private property of citizens, while the population is already, to put it mildly, not in a very favorable socio-economic situations.

These are extremely dubious measures in terms of their goals and their legal support, ”the analyst said.

At the same time, the Ukrainian political scientist, director of the Institute for Analysis and Management of Politics Ruslan Bortnik did not rule out in the RT commentary that such innovations would lead Kiev to conflicts with its own population, since people's private property could be taken away.

“This is fraught with the revitalization of such conflict situations.

Therefore, it is very important that compensation for private owners for land or property assets were marketable, ”he said.

In turn, a RT source in the Armed Forces of Ukraine said that compensation for these plots of land to Ukrainians "will be penny."

“It is impossible to build a wall along the border with Russia and Belarus, this is a huge amount of money that Ukraine does not have.

We have all seen what happened to the netting, which does not protect the border even from wild animals.

So everything will end with the installation of posts, because of which people will be deprived of their property, "said the interlocutor of RT.

In turn, a RT source in the Servant of the People party drew attention to the deplorable state in which, in particular, checkpoints across the state border of Ukraine are located.

“The country you are in is immediately clear at the checkpoint across the state border of Ukraine.

The roads are in pits, there are no conditions - the authorities could not repair them even with the money of the Europeans.

What to say about the whole border in this situation?

And columns, nets do not help here.

So this is another public relations campaign of officials, which will not give any result, ”he said.

As for the section of the Russian-Ukrainian border, which is under the control of the self-proclaimed Luhansk and Donetsk People's Republics (LPR and DPR), then, according to analysts, Kiev may sooner or later demand access to it.

“The Ukrainian authorities will say that since they do not control a large chunk of the border, they demand that they be allowed there. It is clear that no one will do this, since the Ukrainian authorities did not fulfill the terms of the Minsk agreements. However, for Kiev, this will become another reason for attacks on the LPR and the DPR, ”Oleg Matveychev, a professor at the Higher School of Economics, concluded in an interview with RT.