"Priests can not say they do not want livers here"

Carina and Charlotta Milde got married in Hedvig's church in Norrköping in 2016. For them, it was important to get married in the church and they believe that it is time for all priests to start marrying same-sex couples. It is also an issue that has become relevant before the church election. 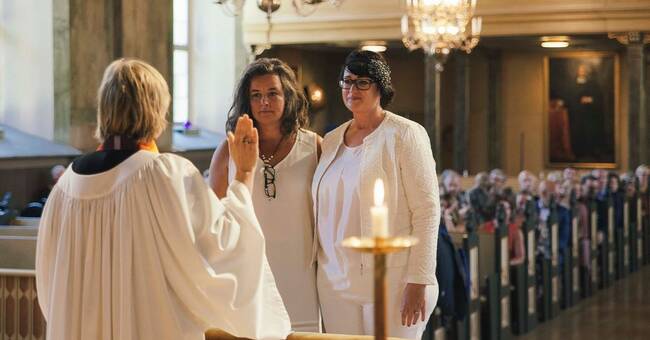 In 2009, the church council decided to allow same-sex marriage, but individual priests can still refuse to marry people of the same sex.

Ahead of the church election next month, many church politicians now want to change the rules so that those who become priests in the future will no longer be able to say no to marrying same-sex couples.

Priests must do their job

- Same-sex marriage is a right that cannot be negotiated away, the priests can do what they are set to do, they can feel at home, says Charlotta Milde.

Her wife Carina thinks it is a matter of course:

- Priests can not say that they do not want livers here, "you can very easily put in the collection and if you die I can take care of you, but I do not want to marry you" you hear how silly it sounds, so stupid are not Swedish priests.

In the segment above, they tell more about their marriage and what they think about priests' right to refuse same-sex marriage.