A new heat record has been measured in Spain, 47.4 degrees, in the city of Córdoba in Andalusia, according to the state weather service. - It is extreme, says SVT's meteorologist Deana Bajic. 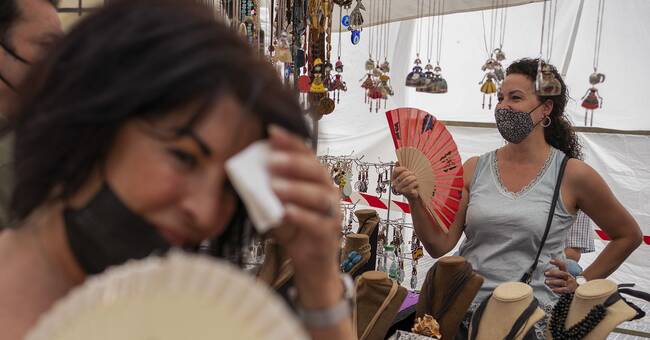 The record is 0.1 degrees warmer than the previous record from the same weather station in July 2017.

The temperature rarely exceeds 45 degrees around the Mediterranean, according to meteorologist Deana Bajic.

- It is very unusual.

It does not usually look like this, she says.

Hot air from the Sahara has led to a heat wave that is holding Southern Europe in a suffocating grip.

Several places have been evacuated

Twelve fire-fighting planes were deployed on Sunday to put out fires in Azuébar in the Valencia region.

Fires are already raging in Castile in central Spain and several smaller towns have been evacuated.

Between 2011 and 2020, Spain has registered twice as many heat waves as in the previous three decades.

- The heat records have been measured more and more frequently in the last ten years.

In connection with climate change, we can expect even more to be fought - and more often, says Deana Bajic.

Highest temperature in Europe - ever

In Sicily, 48.8 degrees was recently measured.

If the measurement is verified, it is the highest temperature ever experienced in Europe.

- Globally, the earth is getting warmer.

We can expect more extreme weather and that means, among other things, heat and drought, says the meteorologist.

The warmest temperature that has been measured in the whole world is 55 degrees.

It was in Tunisia in the summer of 1931. Just a month ago, the record was close to being broken.

On the west coast of the United States, it was 54 degrees hot.

In Sweden, the thermometer has a maximum of 38 degrees.