France: the mobilization against the extension of the health pass does not weaken

The mobilization against the extension of the health pass is not weakening, quite the contrary. They were nearly 250,000 expected by the authorities to demonstrate across France. 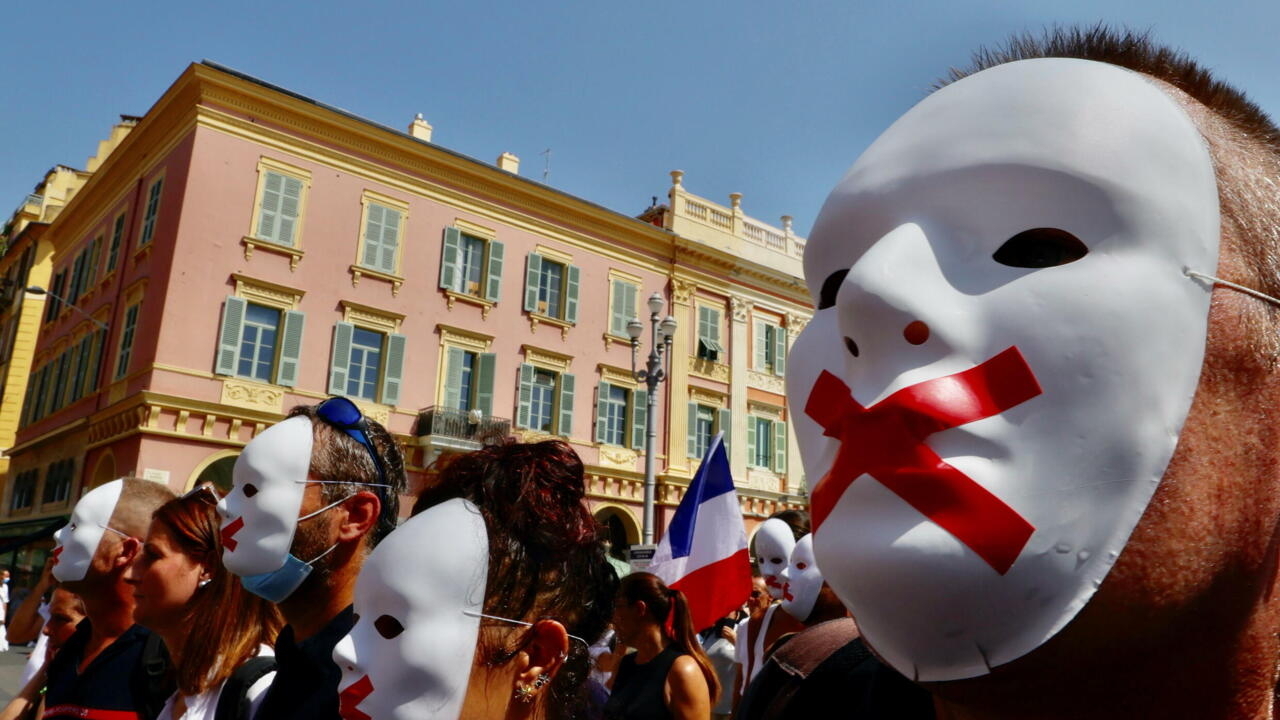 France: the mobilization against the extension of the health pass does not weaken

Demonstration against the extension of the health pass in Nice, August 14, 2021. REUTERS - ERIC GAILLARD

The mobilization against the extension of the health pass is not weakening, quite the contrary.

They were nearly 250,000 expected by the authorities to demonstrate across France.

In the heart of August, opponents of the extension of the health pass did not put away their signs. They are even more and more numerous in the streets to denounce every week the "

". The Interior Ministry expected 250,000 of them to move this Saturday, August 14, against 237,000 had moved according to the police (an underestimated figure according to the collective Le Nombre Jaune, which in had counted more than 400,000).

Political activists, health workers, parents worried about the potential compulsory vaccination of their children, people vaccinated, but opposed to the health pass approach: the profiles were once again very diverse, within the some 200 gatherings scheduled for August 14 in throughout France.

Demonstrations against the #PassSanitaire this Saturday: the mobilization does not weaken in Paris and in the region # demonstration14aout ➡️ https://t.co/DVL0woUCTA pic.twitter.com/B8on5st2Vi

In Paris, the demonstrators split once again into several processions chanting slogans to the tune of "

(ex-National Rally) left from the Place de la Catalogne, while another, organized by yellow vests not wanting to mix with the far right, was made an appointment at Porte Dorée. A third procession left from Place de la Bourse.

Very mobilized in recent weeks, the South-East of France has once again shown its weight in the anti-health pass movement. They were more than 47,000, despite the high temperatures, to take to the streets, including 22,000 in Toulon (or 3,000 more than last week) and 6,000 in Marseille according to the police. In Nice, we could see caregivers and firefighters singing the Marseillaise hand in hand. Elsewhere in France, they were 3,000 in Lyon and 2,600 in Lille pounding the pavement, according to the prefecture. In Brittany, they were more than 1,000 in the city of Lannion, at the invitation of La France Insoumise, Attac and several unions, and in Brest, nearly 2,000 opponents of the sanitary pass also marched. According to information, the movement is not expected to run out of steam in the coming weeks,and a national demonstration is already scheduled for September 4.

Despite the scorching heat, several thousand people demonstrated again this afternoon in #Marseille against the establishment of a health pass ⤵ #PassSanitaire pic.twitter.com/7f1n2k5Jhk

In Brest, more than 2,000 people gathered against the health pass https://t.co/50nFqDonEb pic.twitter.com/SHFhzDWIQH

While traveling in Martinique, the Minister of Health

was angry against this movement, "about

which we talk too much

", pointing the finger at "

Some of the demonstrators against the health pass are indeed accused of anti-Semitism, through the use of slogans known on social networks.

But the majority of participants refused to be associated with any conspiracy thesis.

85% of doctors at Fort-de-France hospital are vaccinated.

Trust them, rather than those who sow fear and discord hoping to reap some fame or power.

Despite these demonstrations, the obligation of the health pass has widened since Monday, after the green light given by

Faced with the spread of the epidemic, the government has also made new announcements for access to shopping centers where the incidence rate exceeds 200 per 100,000. In Paris, the five major brands (Galeries Lafayette, Printemps , BHV, Le Bon Marché and la Samaritaine) should apply from Monday, according to the police headquarters.

In total, 104 centers and department stores of more than 20,000 m2 will have to require the health pass from the start of the week in France.

Health pass in France: the government responds to the demonstrators and releases a little ballast

The health pass in France: let's go for three and a half months

In Marseille, mistrust on the terraces of cafes after the implementation of the health pass