Employment is the biggest livelihood of the people. How to develop local characteristic industries to drive the people to get richer is one of the important contents of General Secretary Xi Jinping's local inspection.   Since the beginning of this year, Xi Jinping has visited local areas for many times. He visited shops, looked at booths, and went to workshops to learn about the characteristics 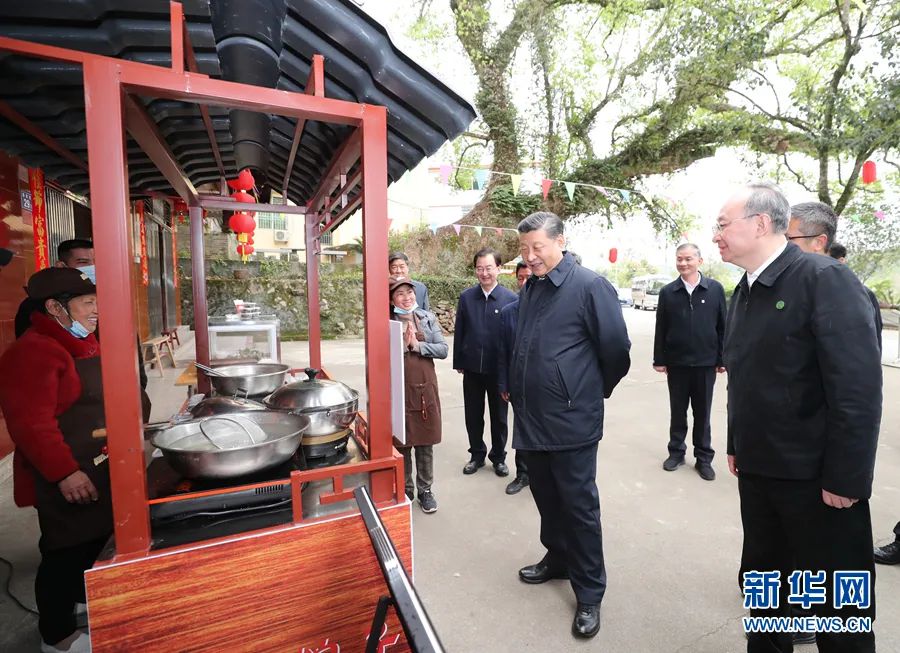 Employment is the biggest livelihood of the people.

How to develop local characteristic industries to drive the people to get richer is one of the important contents of General Secretary Xi Jinping's local inspection.

Since the beginning of this year, Xi Jinping has visited local areas for many times. He visited shops, looked at booths, and went to workshops to learn about the characteristics of local industries and "provide good prescriptions" for the development of local characteristic industries.

This is the afternoon of the 23rd. When Xi Jinping inspected Yubang Village, Xiamao Town, Sanmingsha County, he talked cordially with the villagers at the food stall.

Xi Jinping came to Yubang Village, the "No. 1 Snack Village in Shaxian County", and had a cordial conversation with the villagers at the food stalls, specialty shops, and in front of the villagers' homes to learn more about the development status and prospects of Shaxian snacks.

Some people say that you may not know where Shaxian is, but you can find Shaxian snacks around you with your eyes closed.

But in the 1990s, Shaxian County was still a poor place with small land, large population and low income. The villagers were anxious about how to get rid of poverty and become rich.

When accidentally learned that someone was carrying a pole and selling snacks in the city to make a lot of money, the villagers' thinking suddenly opened up.

The wave of reform and opening up has stimulated the huge demand for the fast food industry in the city. Shaxian snacks quickly entered the urban catering market with the slogan of "one yuan enters the store, two yuan to eat".

On March 4, 1999, the then deputy secretary of the Fujian Provincial Party Committee Xi Jinping pointed out during an inspection in Shaxian County: “The success of Shaxian’s snack industry lies in its accurate positioning, filling the gap of low consumption, small profits but quick turnover, and breaking a path.”

On August 8, 2000, Xi Jinping, then governor of Fujian Province, went to Shaxian again and emphasized during a discussion in Xiamao Town: "Identify the support points for future economic development, especially strengthening the tertiary industry with Shaxian snack industry as the pillar. , Making it a new economic growth point."

Lin Yingsong, a villager on the scene at the time, later recalled: “Governor Xi said that the snack industry should be strengthened and farmers’ incomes should be increased. Everyone was very encouraged by this, and I soon mustered up the courage to run out to open a shop!”

Since then, Shaxian snacks have gone out of Fujian, covered the whole country, and rushed to the world.

Nowadays, more than 60,000 people in Sha County, Fujian go out to operate catering, and the radiation has driven 300,000 people to start their own businesses and become rich.

This is the afternoon of the 7th. Xi Jinping inspected the design department of Qinghai Shengyuan Carpet Group Co., Ltd.

On June 7, Xi Jinping, who was investigating in Qinghai, came to Shengyuan Carpet Group Co., Ltd. to observe how Tibetan carpets went down the plateau and into the world.

Xi Jinping asked the person in charge of the company from time to time to understand the raw materials, market, and output value.

In the workshop, Xi Jinping also chatted with Yang Yongliang, the non-genetic inheritor of Canadian Tibetan carpets, and encouraged him: "Your craft is precious and meaningful. It must be inherited and promoted."

According to estimates, for every $10,000 increase in the export of the Tibetan carpet industry, 16 people can be employed.

Most of the employees of this company are local residents, many of them are housewives who live near the company. After three to five years of company training and production practice, they can grow into skilled workers, with an average monthly salary of up to four to five thousand yuan. .

After seeing it, Xi Jinping said: "The Tibetan carpet industry is an industry that conforms to the reality of Qinghai. It has the effect of helping the poor and making rich, promoting the revitalization of the countryside, and promoting national unity."

This was the afternoon of the 26th. Xi Jinping was in the Liuzhou snail meal production cluster area to learn about the production of snail meal.

In recent years, snail noodles that smell "smelly" and eat "sweet" have been sought after by young people and have become veritable "net celebrity food".

This is inseparable from the contributions of the people of Liuzhou, Guangxi. They used "industrial thinking" to make a bowl of snail noodles into a big industry to enrich the people.

On April 26, Xi Jinping came to Guangxi Liuzhou snail noodle production gathering area to learn about the development of this "net celebrity food".

"Rice and small delicacies, snacks are the soul. The flour will survive the sun and the moon, and the snails will compete." At the entrance of the product display area, this poem praising the snail noodles attracted Xi Jinping's attention.

The short poem not only shows the characteristics of snail noodles, but also shows the ambition of Liuzhou people to expand and strengthen the snail noodles industry.

Because it is not easy to store and transport, snail noodles used to be the local specialties of Guangxi.

However, in recent years, Liuzhou has accelerated the promotion of industrialization, large-scale and branding of snail noodles, and promoted local delicacies to the whole country through standardized production.

The small snail fans created more than 300,000 jobs, spurring about 5,000 poor households and 28,000 people out of poverty and increasing income.

"It's really amazing! It is not easy for Xiaomi fans to create such a large-scale industry, and it is worth studying and summarizing." Xi Jinping praised.

Based on local resources, they used industrial development to solve the employment and wealth problems of the local people.

A good start to the beginning of the year.

Characteristic industries are connected to the people's livelihood.

As Xi Jinping emphasized, industry is the foundation of development. Only when the industry is prosperous can the income of the villagers grow steadily.

The "good prescription" has been laid out, let's do it steadily!