The news is the result of the examination of the 'legacy' of the approximately 50 paroxysmal episodes that have affected the south-east crater of the volcano, the youngest and most active of the four summit craters of Etna since February 16. 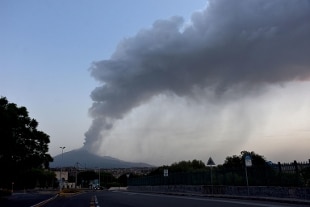 This new elevation data is published in the weekly Bulletin on the volcanic, geochemical and seismic monitoring of today's Etna volcano.

The news comes from the Ingv and is the result of the examination of the 'legacy' of the approximately 50 paroxysmal episodes that have affected the south-east crater of the volcano since February 16, the youngest and most active of the four summit craters of Etna , thus leading to a conspicuous transformation of the volcano's silhouette.

Thanks to the analysis and processing of satellite images, the south-east crater is now far higher than its "big brother", precisely that of the north-east, the undisputed peak of Etna for 40 years. This historical data, which has an uncertainty of 3 meters, was obtained through the processing of two triplets of images of the Pléiades satellite acquired on 13 and 25 July, as part of the international partnership Geohazard Supersites and Natural Laboratories (http : //geo-gsnl.org/), allowing to update the digital model of the Etna surface. The two groups of satellite images acquired (DSM - Digital Surface Model), produced at the spatial resolution of 1 meter, were aligned with each other and compared to a 2015 DSM taken as a reference model.

Furthermore, the scientists had to overcome some problems for the correct topographical reconstruction. In fact, to eliminate the effect of cloud cover, as well as the plume of gas emitted by the summit craters, the DSM derived from the acquisition of 25 July was integrated with the DSM derived from the acquisition of 13 July for the south-eastern portion covered. from the gas in the summit area. From the digital model of the terrain it emerges, as a preliminary point, that the highest point of the volcano is now located on the northern edge of the south-east crater at an altitude of 3357 (3 m).

Since 1980 the summit of Etna has always been considered the North-East crater which, with the paroxysms of September 1980 and February 1981, reached a maximum height of 3350 m. This height, which has decreased over the years due to the collapse of its edges, settled at 3,326 meters in the summer of 2018. But today we have news that this record has now been surpassed by the cone of the south-east crater and therefore Etna has a new peak.