According to the Attorney General's report accusing Cuomo of sexual harassment, DeRosa would have led the governor's efforts to try to cover up the facts 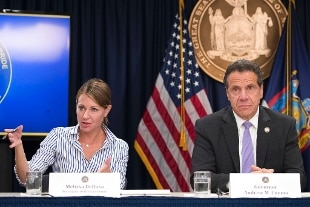 The step back comes at a time when the accused governor is facing potential impeachment. Cuomo is indicted by the New York State Attorney General for sexual harassment allegations of 11 women.

DeRosa is accused of trying to cover up the facts as well as trying to hide the actual data on Covid-19 deaths in retirement homes in upstate New York. "It has been the greatest honor of my life to serve the people of New York over the past 10 years. The strength and optimism of New Yorkers in the most difficult times has inspired me every day," the governor's secretary told CNN.

"Personally, the last 2 years have been emotionally and mentally difficult. I am forever grateful for the opportunity to have worked with such talented and committed colleagues on behalf of our state," said DeRosa.