Carlo Mornati, head of the blue delegation at the Summer Olympics, talks about a "winning bet" for Italy but raises the alarm in the Winter Games key 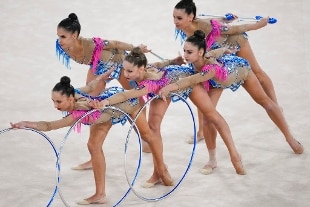 The Italy of rhythmic gymnastics qualifies for the final of the team competition. The Blue Butterflies closed with 87,150 points behind Bulgaria and Russia.

A "won" bet in a "difficult" context. A double satisfaction because behind every medal there is "a very small particle of Cones directly or indirectly". Italy's triumph in Tokyo 2020 is also that of the head of mission and general secretary of the Olympic committee,

A project that started a long time ago, in 2014, in which Olympic preparation was put at the center. "I thank President Malagò for giving us carte blanche," says Mornati. A choice that turned out to be spot on. In Japan the model implemented in Italy with the Tokorozawa base which was "our Formia" was "replicated" and the feedback from coaches and technicians was "hyper-positive".

The initial objective was "30 medals but - reveals Mornati - the projections even awarded us 46. Then it is clear that there is always a dispersion of 25%".

The biggest contribution, absolutely surprising, came from athletics. "Nobody said it but the expectations were there - he still declares - they are the result of maturation, they all arrived in top condition at the right time, then there may also be a component of luck". If it is true that all medals "have the same emotional charge" but "if you win the 100 meters and no one had done them before ...".

Now Mornati with the implementing decrees of the sport reform hopes that "we can work in an easier way". Also because the next challenge scheduled, that of the Beijing Winter Games next February, is even more complicated if possible due to the covid restrictions currently in force in China. "It is closed for everyone and not just for us - he says - I hope that the rules of engagement can change from now on. If this protocol remains, no one goes there"

"See my name together with that of the greatest it has always been incredible. Anyone who knows me knows my path. "

at a press conference at Casa Italia. "Quartet tried only in the last meeting but we were sure it would be the starting one. Once we got on the track we knew we could do something great and we did it". "I can't wait to go to Eugene. It's a great track and there will be the same rivals here. It's just a moment to reconfirm what I've done."

"We haven't slept, you will apologize for the answers ...".

. "Am I the last fractionist? It is the most beautiful thing but also the worst because you see the race as a spectator and at every passing of the baton you breathe a sigh". "I trained in a park for a month. It's a miracle that we managed to do all this,and a miracle cannot be explained ".