They come from Antonella Palmisano, Luigi Busà and from the blues of the 4x100 relay with Marcell Jacobs 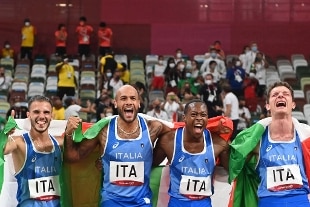 The "rain" of medals for Italy at the Tokyo Olympics continues.

The Azzurri of the

climb to the top step of the podium.

(started from the blocks), the Olympic champion

won the gold medal in

the -75 kg Karate category of

. The blue beat Azerbaijani Rafael Aghayev in the final.

It is the 37th medal and the ninth gold for Italy

, which surpasses its own record in the history of the Olympics, and is the first gold for karate on its debut in the Games.

. The blue stretched three kilometers from the finish line and without any slightest failure she left behind her opponents arriving at the finish alone with a time of 1h29 "12, second the Colombian Erica Arenas and third the Chinese H.Liu. For Italy is the eighth gold medal (the fourth in athletics), the 36th podium in this edition that allows to reach the medal record of Los Angeles '32 and Rome '60.

Three days after the end of the

: 9 gold, 10 silver and 18 bronze. Never in history has Italian sport conquered so many bronzes: it is a record. It was from Atlanta 1996, the edition of the Centenary, that the blue sport did not win such a high number of medals.In Sydney 2000 there were 34 podiums.

where the gold medals were respectively 12 and 13. In the last three editions the medals won had not exceeded 30, 27 in Beijing 2008, 28 both in London 2012 and Rio de Janeiro 2016. To date, Italy is in eighth place in the medal table, seventh for the number of medals won.

More medals are on the way. Luigi Busà in the final for the

. Italy is in the final in

. The blue quartet - Alessandro Sibilio, Vladimir Aceti, Edoardo Scotti, Davide Re - closed their semifinal in fourth place (the first three directly acquired the pass for the final) but was rescued thanks to a time of 2'58 '' 91 , new Italian record. Waiting for the

bronze for Frank Chamizo in free wrestling 74 kg. Eighth place for Italy in the Madison women's track cycling. The blue couple was formed by Elisa Balsamo and Letizia Paternoster. Gold to Great Britain, silver to Denmark and bronze to Russia. Blurred the 50 km, with the blues who were not able to get close to the medals area. At the Sapporo Odori Park the best was Andrea Agrusti, who finished 23rd in 4h01'10 "the race won by the Polish Dawid Tomala in 3h50'08". Silver medal for the German Jonathan Hilbert in 3h50'44 ", bronze for the Canadian Evan Dunfee in 3h50'59". The other two blues at the start, Marco De Luca and Teodorico Caporaso, did not cross the finish line. Outside the medal area also Mattia Busato in kata,karate specialty that yesterday gave Italy the first, historic medal with Viviana Bottaro. Milena Baldassarre, 19, enters the final.

Among the latest milestones are

held in Sapporo. The blue finished the race in 1h21'05 ", ahead of the Japanese Koki Ikeda (1h21'14"), silver, and Toshikazu Yamanishi (1h21'28 "), bronze. The other blue Francesco Fortunato closes 15th (1h23 '43 "). Stano, 29, was born in Grumo Appula in Puglia but lives in Rome with his wife and former colleague Fatima Lofti. His idols are the former blue walker Ivano Brugnetti and the Ecuadorian Jefferson Perez. At the finish line Stano celebrated with the gesture of the finger in his mouth to symbolize the arrival of a baby. Carded for the Fiamme Oro he was at his first Olympic experience.

Elia Viviani won the bronze medal in the Omnium

of track cycling. In Rio 2016 in the same discipline (but with six tests instead of four) the Italian standard-bearer in Tokyo 2020 had conquered gold. The blue also prevailed in the third round, the elimination one, after finishing thirteenth 13th in the 'scratch' and eleventh in the 'time race'. The Veronese, reigning Olympic champion, was far behind in the middle of the course but was able to recover in the second part of the challenge. Viviani was preceded by the British Matthew Walls, gold medal, and the New Zealander Stewart Campbell, silver medal.

And another bronze comes from Viviana Bottaro

in the final in kata, a specialty of Karate on her debut in the Tokyo 2020 Olympic program. At the Nippon Budokan, the Ligurian Viviana Botaro defeated the American Sakura Kokumai, becoming the first blue on the Olympic karate podium on the day of the debut of the discipline at the Games.

"I wanted this bronze at all costs, because these Olympics had not yet completely satisfied me: now yes. The fourth place in the 1,500 freestyle was a bad blow", was the declaration of

Paltrinieri, after winning the bronze. at the Tokyo 2020 Olympics in the 10 kilometers of open water swimming

. A bronze that is worth gold, repeats the technician Fabrizio Antonelli after the performance in the waters of the bay of Odaiba. It is the first time in the history of the Games that a blue athlete takes two medals between swimming pool (silver) and open water (bronze).

Greg, 26, a swimmer from Carpi registered for the Fiamme Oro, already a silver medalist in the 800 freestyle, suffered, and he does not hide it, recovering from mononucleosis. "Today was difficult: hot, messy, they started from the first lap and I didn't even notice it," said the hot swimmer, speaking of the leading group that he then had to chase. "However, I'm happy to be on the podium. Where did I find the energy? Before the race I was very concentrated."

The Italian sprint canoe returns to the Olympic podium after 13 years (Beijing 2008).

For Italy Team this is the 10th silver in Tokyo 2020. The blue was preceded by just 45 thousandths from the Hungarian Sandor Totka (35 "035), third the British, outgoing Olympic champion, Liam Heath, who reached 167 thousandths from the winner Rizza, 30 years old from Pavia, European distance champion and third this year in the World Cup in Seghedino (the only podium in his career).

Positive result for the

of athletics that wins the final. The quartet made up of rookie Lorenzo Patta (born in 2000), Marcell Jacobs (gold in the 100), Eseosa Desalu (semifinalist in the 200) and Filippo Tortu (semifinalist in the 100) finished in 37 "95, setting the new Italian record (the previous was 38 "11, obtained at the 2019 World Championships in Doha). Italy came in third place in the second battery behind China and Canada (both with 37 "92), with the fourth total time among the eight qualified. Out of the final the American relay, only sixth in the Azzurri's battery. Best time ever is for Jamaica (37''82) who wins her battery in front of Great Britain (38''02) and Japan (38''16). '08),arrived behind the blue quartet. The final is scheduled for today at 15.50 Italian time.