Colonized by France since the 19th century, Côte d'Ivoire gained independence on August 7, 1960, under the aegis of its historic leader Félix Houphouët-Boigny, who would become the first president ... 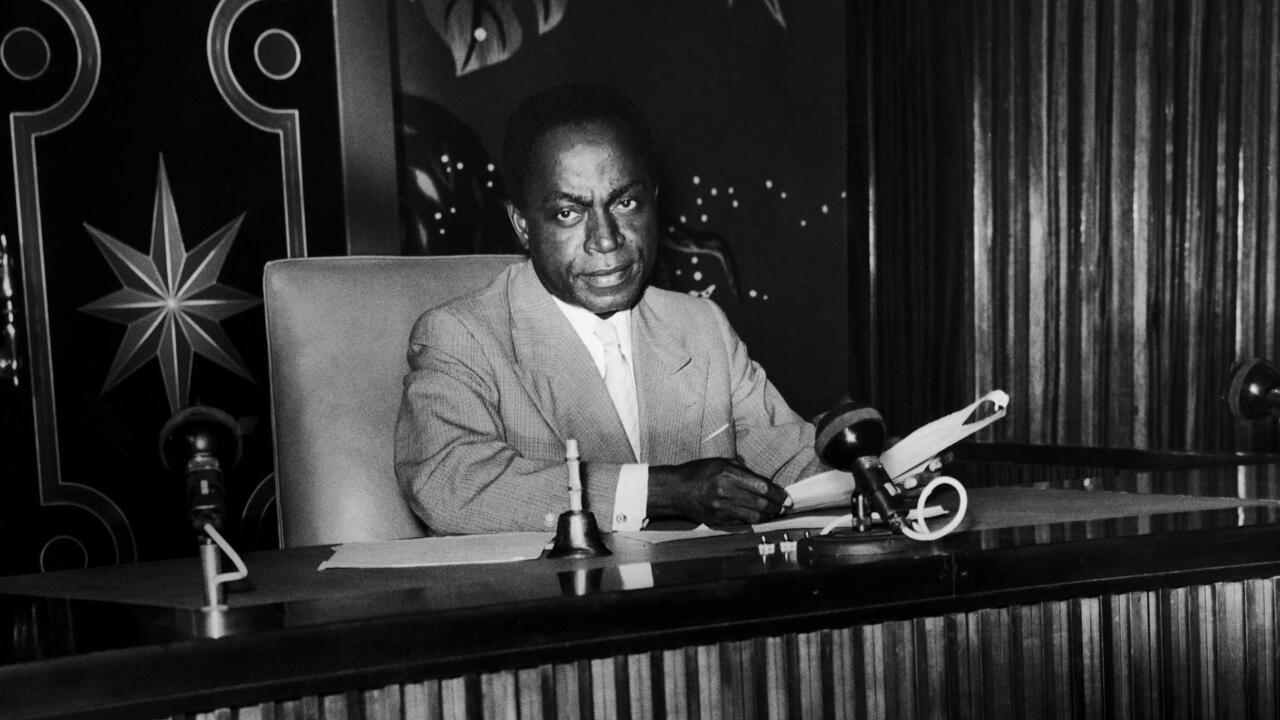 Colonized by France since the 19th century, Côte d'Ivoire gained independence on August 7, 1960, under the aegis of its historic leader Félix Houphouët-Boigny, who would become the country's first president.

Considered as the man of France in Africa, the latter led a policy of close cooperation with the former colonial power, anchoring his country firmly to the Western bloc.

The French colony of Côte d'Ivoire was officially born on March 10, 1893. Its first administrator was a certain Louis-Gustave Binger, a naval officer, who had passed through Dakar where he had served as an orderly officer of General Faidherbe .

The man was also distinguished by his reconnaissance missions of the unknown territories of the Niger loop.

It will give its name to the second capital of Côte d'Ivoire, Bingerville, which supplanted Bassam in 1900, before ceding in turn its place as the country's first city to Abidjan, in 1934.

The French had been present in the coastal regions of the Gulf of Guinea as early as the 17th century. The establishment of the first French counter in Assinie, located east of Abidjan, dates from 1687, but it was only in the 19th century that the French presence became significant with the creation of counters in particular in Grand-Bassam (1842). and in Dabou (1853). However, when the Ivorian territory was created as a French colony in 1893, Paris did not have complete control over all of the Ivorian space.

Well established in the south-east of the country, the French encountered a lot of resistance in the first years of colonization, in particular in the Islamized savannas of the north where they faced the troops of the formidable Samory Touré. After a long hunt, the military and religious leader was finally defeated in 1898, captured and deported to Gabon where he died in captivity. The conquest of the entire territory, attached to French West Africa (AOF) in 1905, ended very gradually.

According to colonization historians, resistance to conquest was numerous and took various forms ranging from revolt to insubordination, including evasion from work and taxation.

The conquest of what will become the Ivory Coast

was, by the resistance encountered, one of the longest and bloodiest than the French colonization. had to face in West Africa.

: Ivory Coast: do the operations to rename the streets of Abidjan make residents think?

In 1915, the pacification of the colony was considered to be almost complete.

It is the beginning of the exploitation of its innumerable natural resources whose development was ensured by a few large companies.

In 1904, the occupying power launched the construction of a railway which linked the Atlantic coast to Bouaké in the center of the country (from 1912), then to Bobo-Dioulasso, in the south of present-day Burkina Faso (from 1933).

The development works of the port of Abidjan were also started from the first years.

Based on a plantation economy, the rapid development of the colony during the interwar period made this country the most prosperous territory of the French West Africa.

This development benefited above all the European colonists who held the reins of the economy and dictated their laws to the metropolis.

Development also enabled the enrichment of a handful of black planters who had based their prosperity on coffee and cocoa.

Dark side of development, forced labor to which the indigenous population was subjected, coupled with brutality, abuse and racial segregation, with an administration too often complicit in these crimes.

We will have to wait until the end of World War II for French colonial policy to evolve. The signal for change was given by the Brazzaville Conference organized in 1944 at the initiative of General de Gaulle. The Conference accepted the principle of admission to citizenship of all Africans and recognized the need to give the colonized a greater voice in the political management of their countries.

On the ground, in Côte d'Ivoire, encouraged by the new spirit that was blowing through the administration, the African planters created in 1944 an African agricultural union (SAA), with the aim of putting an end to economic discrimination among peasants. blacks were victims. During the war, the local planters had also seen their production fall, for lack of manpower on the one hand and because, on the other hand, of the various constraints to which they were subjected unlike their metropolitan counterparts. Forced labor whereby indigenous people, including planters, were forced to leave their plantations to work on European plantations had become the real plague of colonial Côte d'Ivoire.

It was as president of the SAA that Félix Houphouët, who was not yet called Boigny, entered the Ivorian arena in 1944. Coming from a wealthy family of landowners, the forty-something immediately entered into the showdown with the powerful camp of the settlers. Within the SAA, he campaigned for the rights of indigenous planters, but also for the rights of agricultural workers humiliated by the abusive practices of the settlers.

Aware of the complexity of the balance of power, Houphouët quickly moved the battle to the political field by being elected at the end of the war to the National Assembly in Paris.

the law which abolishes forced labor in the overseas territories

and which bears his name.

Acclaimed by his people who gave him the title of “Boigny” (“ram” in Baoulé), Houphouët le Bélier then founded his own party, the Democratic Party of Côte d'Ivoire (PDCI) and took the head of the African Democratic Rally ( RDA), a pan-African anti-colonial movement affiliated with the French Communist Party.

Towards independence "without Cha Cha"

From now on, the history of Côte d'Ivoire will merge completely with that of

, even if the 1950s will see the latter distance himself from the anti-colonialist struggles of his youth. In 1951, the Ivorian leader broke ties with the Communists, choosing to ally for a time with the moderate left of the metropolis represented by the tandem René Pleven and François Mitterrand, before asserting himself as a pillar of Gaullism, at the favor of General de Gaulle's return to business in 1958.

Calculations or a sincere ideological turnaround?

The fact remains that this exemplary loyalty was rewarded, with the co-opting of the Ivorian in all French governments without interruption between 1956 and 1959. This made the person himself say, as the French journalist Thomas Hofnung reports: "

I was taken hostage, because each President of the Council who passed left me to his successor

These positions of influence in the highest French political sphere allowed Houphouët-Boigny to participate in the development of the reforms which led to decolonization. According to historians, the Ivorian president did not want this independence for Côte d'Ivoire, at least not in 1960, believing that his country was not ready. "

", writes Marcel Amondji, author of a critical biography of the Ivorian leader (3). Houphouët was indeed an ardent defender of the Franco-African Community, a stillborn project of a union between France and its former colonies of French-speaking Africa, which finally fell through with the resounding "no" of the Sékou Touré's Guinea in 1958.

Thus, on August 7, 1960, Côte d'Ivoire in turn entered the era of independence without its historic leader Félix Houphouët Boigny really wishing it. But throughout his long presidency at the head of his country (1960-1993), the Ivorian remained faithful to his “Franco-African” vision, playing the game of continuity and alliance with the former colonial power. He led a policy of close cooperation with France, allowing metropolitan businesses to control a large part of the economy. With 40,000 nationals residing in Côte d'Ivoire in the early 1980s, the French community was the largest in Africa. Long after independence, the Ivorian administrations continued to be managed by executives and aid workers from France. Until the end of Houphouët's reign,the presidency itself had two French people among the president's closest collaborators.

► To read also: African independence: where is the decolonization of minds?

On the geopolitical level also, Abidjan was the centerpiece of the diplomatic system for France's affirmation of its preeminence both in Africa and in multilateral organizations.

Houphouët's ties were so close with French leaders, in particular with the African cell of the Élysée, notably under

, the famous “Monsieur Africa” of French presidents, that observers have sometimes wondered whether the “Old »Had no more influence over his interlocutors on the banks of the Seine than they over him.

Under these conditions, how can one be surprised that the term “Françafrique” was invented somewhere between Abidjan and the native village of the former Ivorian president, Yamoussoukro?

The crisis in Côte d'Ivoire,

Félix Houphouët and the Ivory Coast: the other side of a legend,

Ivory Coast: independence and after in 5 dates

: Proclamation of the independence of the Republic of Côte d'Ivoire.

: Admission of Côte d'Ivoire to the UN.

: Promulgation of the Constitution which establishes a presidential-type regime.

: Election of Félix Houphouët-Boigny as President of the Republic.

He established a one-party regime with the Democratic Party of Côte d'Ivoire (PDCI).

: Signature of a cooperation treaty between Côte d'Ivoire and France.

On April 24, 1962, the two countries signed an agreement on defense and military and technical assistance.

Our selection of archives on the subject

The March of the World: Houphouët by Houphouët

The African debate: Ivory Coast: the results of 60 years of independence

Memory of a continent: August 7, 1960: independence of Côte d'Ivoire

So far, so close: Ivory Coast: Independence, the days after