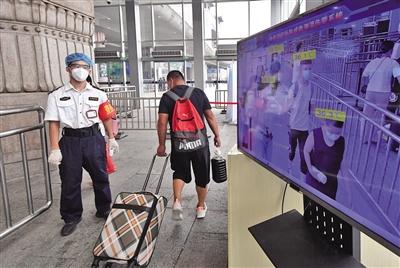 To enter Beijing by highway, you must swipe your ID card to verify itinerary information

On August 4, at the Capital Airport, the taxi master disinfected the door handles and car seats after sending passengers.

On August 4, at Ciqikou Station of Metro Line 7, a non-contact thermometer was installed at the A station entrance.

On August 4, at Baiziwan Station of Metro Line 7, staff were disinfecting the platform.

On August 4, at the Xiji Comprehensive Checkpoint, the checkpoint conducted identity verification on vehicles entering Beijing.

On August 1, Xu Hejian, deputy minister of the Propaganda Department of the Beijing Municipal Party Committee and spokesman for the municipal government, said at a press conference that the level of control over entering Beijing should be improved.

On August 4, Beijing once again emphasized that it will comprehensively upgrade its prevention and control measures.

You must swipe your ID card to verify itinerary information. Itinerary cards with stars will be persuaded to return

On August 1, Xu Hejian, deputy director of the Propaganda Department of the Beijing Municipal Party Committee and spokesman for the municipal government, stated at a press conference that all personnel in cities where high-risk areas are located are restricted from entering Beijing, and those in high-risk areas are not allowed to enter Beijing.

It is necessary to implement the "four-party responsibilities" for those who have entered Beijing, and immediately carry out control measures such as position verification, nucleic acid testing, and health observation to ensure that no one is missed.

Airports, railway stations, long-distance passenger stations, and checkpoints entering Beijing in the affected areas will strengthen inspections on the direction of entry into Beijing.

At about 15:00 on August 4, the reporter saw at the Beijing-Harbin Expressway Xiji Comprehensive Checkpoint that a total of 6 small passenger lanes and 1 bus lane in the direction of the checkpoint were open to traffic.

The vehicles waiting to enter Beijing lined up for less than 100 meters, and there was no particular congestion.

After following the line of vehicles in Beijing, about ten minutes, the reporter arrived at the checkpoint.

When a vehicle enters the checkpoint, the public security inspector will stop the vehicle first, ask everyone in the vehicle to show their ID card and roll down the rear window glass.

The police swiped the ID card on the device, and the system prompts that there is no abnormality in the itinerary.

The whole process takes about one minute.

The reporter saw at the scene that all the drivers and passengers in the bus must get off the bus, line up to swipe their ID cards for verification, and the system will determine whether they can enter Beijing based on the big data on epidemic prevention.

If I have been to or passed through an epidemic area, the big data itinerary card will be starred. Can I still enter Beijing in this case?

The staff said that normally speaking, it is not possible to enter Beijing under such circumstances and will be persuaded to return at the checkpoint.

However, the staff member also said, “If there is a situation where you need to enter Beijing in a particularly urgent way, and you have a work unit or residence in Beijing, you can first consult your unit or local community. If your unit or community agrees to enter, you can enter."

On August 3, Cui Wei, director of the Passenger Transport Group of the Epidemic Prevention and Control Office of China Railway Beijing Bureau Group Co., Ltd., said at the press conference that the railway department has decided to restrict passengers from 23 regional stations including Zhengzhou, Nanjing, Yangzhou, and Shenyang from entering Beijing. Control measures, suspend the sale of tickets to stations in Beijing.

At about 14 o'clock on August 4, the reporter came to Beijing West Railway Station and entered the station from the south entrance. At the security checkpoint, a staff member took the temperature and then went through the normal baggage security check to enter.

A tourist who came to Beijing from Shaanxi told reporters that since his departure point is a low-risk area, he did not encounter any special inspection measures after coming to Beijing and leaving the station.

Ma Yunnan, deputy director of the Beijing West Railway Station Office, introduced that on the basis of normalized prevention and control, the station has changed the frequency of killings from once every four hours to once every two hours, and regularly sampled and monitored the environment inside the station.

At the same time, the elevator in the station is equipped with a contactless intelligent voice call system, and passengers can control the elevator operation through gestures and voice.

In the waiting room on the second floor, a staff member disinfected and wiped the gate of the ticket gate.

At the same time, increase the frequency of ventilation in the waiting room.

"Far-infrared rays and non-sensing thermometers are added to all entry and exit points. If feverish passengers are found, they will be dealt with in time."

At the Beijing Capital International Airport, the reporter saw that all security personnel at the entrance of the departure floor were wearing masks, transparent masks, gloves, and headgear.

When entering the departure level of the airport, passengers are required to show their health code and have their body temperature checked by security personnel. They can enter only after there is no abnormality.

If a passenger drives a private car into the underground parking lot and then goes to the fourth floor of the departure floor, he must go through procedures such as temperature measurement and registration of a health code.

The reporter found that drivers and passengers are not accustomed to wearing masks in private cars, and some people will not wear masks in time after getting off the car, or only pull the masks to the chin and put them on when they are about to enter the airport lobby for temperature measurement.

At the information desk, passengers must stand outside the 1-meter cordon to communicate with the service staff.

The staff at the service desk have a small watering can on hand. The staff introduced that the pot contains a diluted 84 disinfectant, and they are required to spray it into the air when crowds are crowded or after receiving passengers to play a role in disinfection.

In the airport, shops are open normally. Passengers must scan the health code to enter the shops. The shops provide disposable alcohol.

At 15:00, the reporter followed the Beijing Municipal Transportation Comprehensive Law Enforcement Corps to check the taxi epidemic prevention and control situation at the Capital Airport.

Liu Huan, the leader of the 11th Detachment of the Beijing Municipal Transportation Comprehensive Law Enforcement Corps, said that this time the main check is whether the driver reminds passengers to wear masks, register the journey, whether the vehicle is equipped with disinfection items, and whether the driver wears masks throughout the journey.

"From the current law enforcement situation, drivers can remind passengers to wear masks and register their itineraries."

In response to the recent epidemic, from July 30, the Beijing Subway has strengthened the prevention of stations and trains, and strictly implemented the entry temperature measurement regulations; the Beijing-Hong Kong subway has scientifically and accurately implemented five basic epidemic prevention including ventilation, disinfection, temperature measurement, setting up isolation areas, and wearing masks. Measures to strengthen safety protection measures.

On August 4, the reporter visited and found that different temperature measurement methods were adopted at different stations of the Beijing subway.

The reporter noticed that one of the non-contact thermometers displayed a temperature of 35.9°C when the screen was turned off, and the other was 36.1°C.

Beijing Metro also earnestly implemented measures to disinfect the turnstiles, escalator handrails and other parts frequently touched by the hands of station passengers every hour during operating hours, and disinfect other public areas, operating equipment and facilities, and toilets every two hours; Beijing-Hong Kong Metro continued to strengthen the station , Disinfection and ventilation of trains, and timely disinfection of equipment in stations that are in close contact with passengers, such as security screening machines, turnstiles, and automatic ticket vending machines.

The reporter observed at Liuliqiao Station, the interchange station of Metro Line 10 and Line 9, that when the flow of people was not large, the staff at the security check office would pick up the watering can filled with disinfectant and repeatedly kill the ground.