Bad weather in the North: Lake Como overflows, look at the bridges over the Adige

Fear returns for the severe storms that are hitting Lombardy, especially in the province of Lecco. Curcio: "Split country, floods in the North and fires in the South" 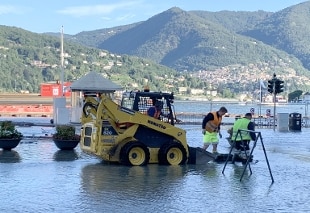 05 August 2021 From the first hours of dawn, Lake Como invaded the streets of the city, the lakefront and Piazza Cavour, following the abundant rains that fell in the last two days on the Comasco and on the entire Adda basin, starting from Valtellina . At 9 the level of the Lario was 134 centimeters. In the last six hours it has grown by almost 20 centimeters and in the next few hours - even if the sun is back - it will continue to rise. Traffic has been diverted to internal roads, but there are already fears what will happen tomorrow, with the resumption of construction on the A9 which will divert heavy traffic from Northern Europe to ordinary roads.

During the night there were dozens of firefighters' interventions to deal with flooding and overflowing waterways. Today, due to safety measures after the landslides of recent days, the Regina state road near Colonno is closed until 8 pm.

Due to the wave of bad weather that affected the Trentino Garda area during the night, a flow of mud and debris submerged the Hotel Pier, on Garda 45 bis. No injuries were registered, but the guests, about a hundred, were transferred to Limone.

The Adige bridges under observation: Isarco overflows in Chiusa

The level of the Adige river is at the limits of the hydrometric guard level: the firefighters are monitoring all the main bridges. The Isarco has instead overflowed: Chiusa is under water, the mayor has issued the maximum alert asking citizens not to leave the house. Rescue teams are working to clear the Brenner state road, still closed at times, from mud and debris.

The lake overflows in the Lecco area

The state road 639 "De Laghi di Pusiano e di Garlate" in the province of Lecco was closed due to the overflow of the lake following heavy rains. To communicate it is the Anas. The section, closed yesterday evening in both directions, from km 13.9 to km 14, is in the municipality of Suello, in the province of Lecco. The Anas teams and the police are present on site to manage the road network and to restore normal traffic in the shortest possible time.

River Lura and Seveso leave the banks in the Milanese area

Night of work for the Milan fire brigade due to the heavy rains that at the turn of midnight caused the flooding of two rivers, the Seveso and the Lura, in the Lombard capital and in the hinterland. There were no significant injuries or material damage. The Lura came out of the banks around 3.30 in Lainate (Milan), fortunately in the industrial area and therefore with little housing presence: only some buildings had their cellars and taverns flooded. In Milan the Seveso was released around 2330-24, but in a limited way, in the Niguarda area, and particularly in via Valfurva. The fire brigade returned to Lainate and the Civil Protection arrived on the spot, diverting part of the course into the countryside.

120 displaced people return to the camp

Alarm returned for the 120 people evacuated last night from the Dervio campsite, in the Upper Lake in the province of Lecco, due to bad weather. After being housed for a few hours in the oratory, for fear that the Varrone stream in flood due to the rains and the reservoir of the Pagnona dam overflowed, they were brought back into the structure. Throughout the province the rain stopped and the sun returned this morning. The provincial road reopened in Balisio di Bellano, on the other side of Valsassina, closed for fear of other landslides and landslides after those of yesterday. The state of alert remains throughout the territory. In particular, the mountain slopes, weakened by the rains, should be monitored. The sharp drop in temperatures should also be noted, not only at altitude.

Curcio: "Floods and fires sanction a split in the country"

"The floods and intense rains that have occurred in Northern Italy, and fires are phenomena that are sanctioning a split in the country substantially in two. Yesterday and today we are witnessing a series of major fires in Sicily. During the night we witnessed another wave of bad weather that particularly affected the area "of the province of Lecco," as well as the Como area was particularly affected by events of intense rain and consequent floods ". Thus the head of the Civil Protection department, Fabrizio Curcio, in a videoconference hearing at the Environment Commission of the Chamber.

Last rains on the northern regions while the intense heat finally subsides on part of the south. Tomorrow the third heat wave of the season will definitively end while bad weather will grant a respite in the northern regions, but over the weekend everything changes. The perturbation that arrived yesterday in northern Italy, the n.2 of this month of August, is moving away leaving only some residual precipitation in the extreme North-East, already running out in the morning. The west or mistral wind that follows it will cause less hot air to spread even over part of the south where, after many days, the more intense heat is evidently dampened; the last peaks even well over 35 degrees will be possible in Puglia and the Ionian Sea, where the decline is postponed to tomorrow. Therefore, it is expecteda respite from bad weather in the North and heat in the South, but with the prospect of a restoration of the atmospheric circulation that has characterized the last period since the weekend, when the North African high pressure will make its way back to the Center-South with its own load of torrid air and, at the same time, the North will again begin to be lapped by disturbed currents.

In particular, between Saturday and Sunday, a new perturbation (n.3) will bring rains and thunderstorms mainly on the Alps and the high Po Valley, while temperatures, especially on Sunday, will return to rise towards 35 degrees on Emilia Romagna and regions. central, and towards 40 degrees on the southern regions thus decreeing the beginning of the fourth heat wave this summer. In fact, the intense heat will also be felt in the following days and around the middle of next week it could also affect the northern regions more directly.