"We see stabilization, a slow decline": WHO assessed the situation with the spread of COVID-19 in Russia

The daily increase in cases of coronavirus infection in Russia was 23,120, 20,370 people recovered, 794 patients died. As the representative of the World Health Organization in the Russian Federation Melita Vujnovich said, WHO records a "slow decline" in the number of cases of COVID-19 in the country. At the same time, since the beginning of the pandemic in the world, the total number of cases of coronavirus has exceeded 200 million. WHO called for a moratorium on booster (additional) vaccinations against COVID-19. The United States did not support this initiative, stating that it is capable of providing vaccines to both other countries and its own population. 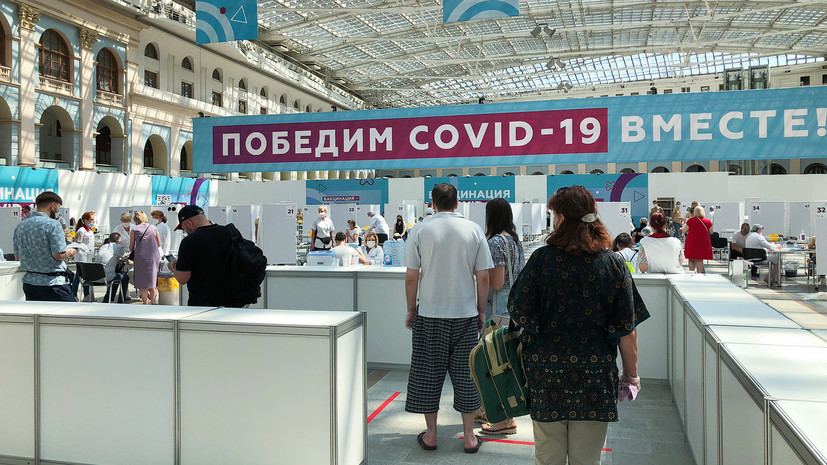 The total number of COVID-19 cases registered in the country has reached 6,379,904; 5,700,212 patients have recovered since the beginning of the pandemic in Russia.

162,509 people died from complications due to coronavirus infection and concomitant diseases.

The representative of the World Health Organization in Russia, Melita Vuinovich, on the air of the Russia 1 TV channel, said that WHO is recording a slow decrease in the number of cases of coronavirus in the Russian Federation.

“As for Russia, we are very happy to see stabilization, a slow decline.

Now the reproductive number, which shows, so to speak, the activity of the epidemic in a certain population, is now below one in Russia, and this is good.

So we see a slow decline in general in Russia, but, of course, (the situation -

) is different in the regions, ”said Vujnovich.

The Ministry of Health reported that 37 million people were vaccinated in Russia with at least one component of vaccines against COVID-19, Interfax reports.

“To date, 37 million people have been vaccinated throughout the country ... In a week (this number -

) increased by 3 million,” said Deputy Head of the Ministry of Health Oleg Gridnev during an online consultation “Protection against COVID-19: measures against new coronavirus infection ”.

The day before, the head of the Ministry of Health, Mikhail Murashko, reported in an interview with the Komsomolskaya Pravda newspaper about more than 35 million Russians who were vaccinated with the first component of the vaccines.

Russia ranks fourth in the world in the number of detected cases of coronavirus.

According to Johns Hopkins University, more than 200 million cases of the disease have been recorded since the beginning of the pandemic, most in the United States (35.3 million), India (31.8 million) and Brazil (20 million).

More than 4.2 million people have died from complications due to COVID-19 worldwide.

WHO call for moratorium on booster vaccinations

On August 4, the director general of the World Health Organization Tedros Adhanom Ghebreyesus called on the world community to introduce a temporary moratorium on booster (additional) vaccinations for those already vaccinated due to a shortage of vaccines against coronavirus.

He noted that such a decision would allow to send more drugs to low-income countries and ensure that the goal set by WHO is achieved - to vaccinate at least 10% of the population of all countries of the world by the end of September.

According to him, more than 4 billion vaccinations have been made in the world at the moment, more than 80% of which fell on countries with an upper middle income level, although less than half of the world's population live in them.

“We cannot agree that countries that have already used most of the global vaccine supply will use it even more, while most of the most vulnerable people in the world remain unprotected,” he stressed.

Then the assistant to the head of WHO, Bruce Aylward, explained that the organization calls for a moratorium until at least the end of September, but an extension of this measure is possible.

He noted that priority should be given to increasing the coverage of standard vaccination for the most vulnerable categories of citizens (health workers, the elderly, people with chronic diseases).

In this regard, the WHO representative called on the countries of the world "to take a wait-and-see attitude and not to vaccinate people with a booster dose until the most vulnerable segments of the population are vaccinated."

Also on russian.rt.com "The country sacrificed the older generation": Bulgaria announced 10 thousand deaths due to mistakes in the vaccination campaign

In the United States of America, WHO's position was described as “the wrong choice”, since the United States, if necessary, can simultaneously send vaccines to other countries and provide booster doses to its own population.

“We have enough supplies in this country to ensure that every American has access to the vaccine.

If the US Food and Drug Administration (FDA -

) decides to recommend (use -

) booster doses for a subset of the population, we will have enough supplies to support that too.

We believe that we can do both, we do not have to make a choice (in this matter -

The United Nations responded evasively to a question about booster doses and WHO's appeal.

“I will not comment on this issue at the moment.

WHO plays a leading role in medical matters, and we, of course, fully support their work, ”said UN Secretary General Representative Stephane Dujarrick.

Rospotrebnadzor told about the differences between the "delta" strain from the original "Wuhan" version of COVID-19.

The department noted that the strain, first identified in India, is distinguished by "a number of mutations in the S-protein gene", which, presumably, allows it to "escape" the action of antibodies in those who have previously had coronavirus.

Along with this, the "delta" strain is 2-2.5 times more infectious.

In Russia, at present, about 68% of detected cases are attributable to this mutation.

“The course of the disease with the delta variant of coronavirus infection is more rapid and more often more severe - moderate and severe prevail in patients, less often asymptomatic and mild forms are recorded.

The treatment of such patients is both more complicated and, accordingly, longer, ”the Rospotrebnadzor emphasized.

The most vulnerable category for the delta strain is persons aged 14 to 29 years.

At the same time, the department indicated that by external signs it is impossible to determine which particular strain of SARS-CoV-2 a particular person fell ill with.

The department added that in order to prevent the emergence of such strains in the future, it is necessary to fulfill a number of conditions, including the achievement of at least 60% level of herd immunity and compliance with sanitary measures, such as social distance and mask regime.

In addition, citizens are advised to revaccinate every six months "for sufficient protection against new strains."

“The studies and observational data available so far indicate that the protective effect of COVID-19 vaccines against the delta variant may be diminishing ... But existing vaccines still have good prophylactic and protective properties against this strain, and also, in case of illness, against severe forms ", - explained in Rospotrebnadzor.

Tests on the combination of "Sputnik Light" with other vaccines

On August 4, the Russian Direct Investment Fund announced that the Russian coronavirus vaccine Sputnik Light, during research in Argentina, demonstrated high safety performance in combination with the vaccines AstraZeneca, Sinopharm and Moderna.

“In the course of the study, the Sputnik Light vaccine is used in combination with other vaccines as both the first and the second (boosting) injection.

The data obtained by the Ministry of Health of the province of Buenos Aires shows that the combined use of Sputnik Light with other vaccines and vaccination with two injections of Sputnik Light alone is safe - there are no serious side effects associated with vaccination.

All combinations used during the study were recognized as safe, ”the Foundation said.

The data, specified in the fund, were compared with the control group, which was vaccinated with the first and second components of "Sputnik V".