JO-2020 / Sailing: Lecointre and Retornaz in bronze in 470, France leaves with three medals Tokyo (AFP) Camille Lecointre and Aloïse Retornaz, in a 470 dinghy, won the bronze medal on Wednesday in the final Olympic sailing event, bringing to three podiums the record of tricolor sailing at the Tokyo Olympics after the silver of Charline Picon and Thomas Goyard in windsurfing RS: X. But the doubt hung for a long time on Wednesday afternoon on the final composition of the podium, after th 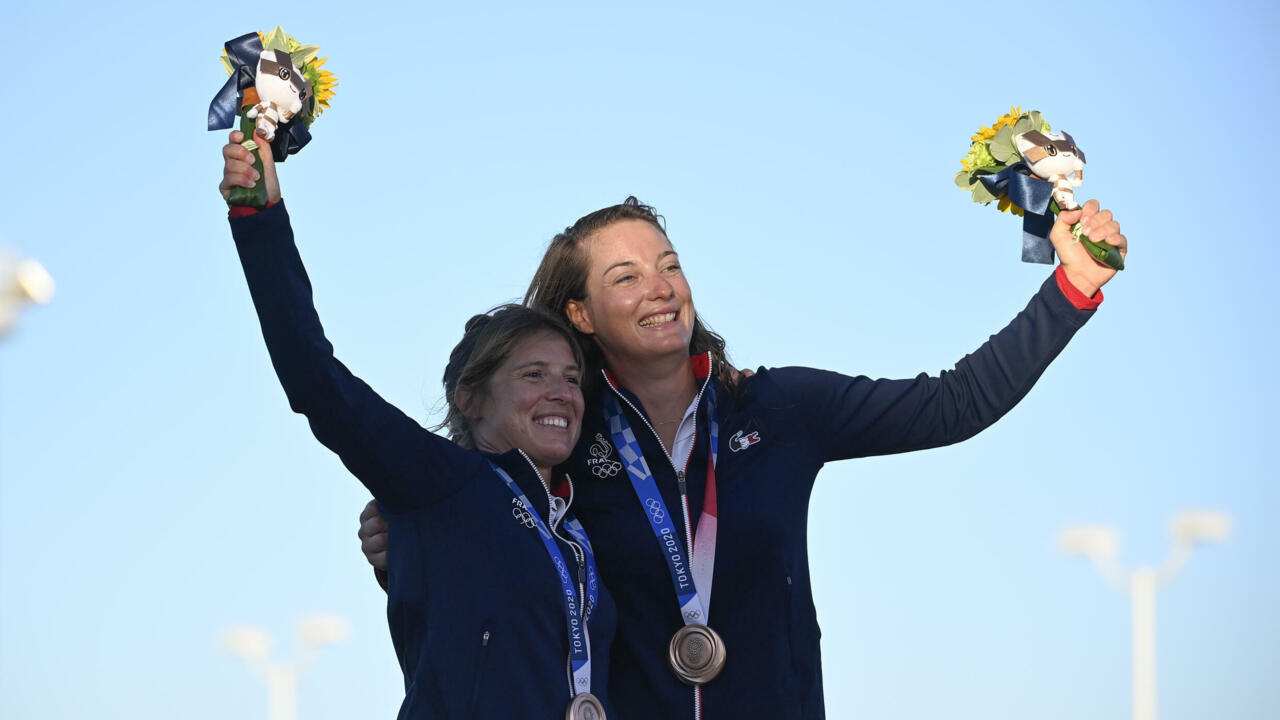 Camille Lecointre and Aloïse Retornaz, in a 470 dinghy, won the bronze medal on Wednesday in the final Olympic sailing event, bringing to three podiums the record of tricolor sailing at the Tokyo Olympics after the silver of Charline Picon and Thomas Goyard in windsurfing RS: X.

But the doubt hung for a long time on Wednesday afternoon on the final composition of the podium, after the filing by the French of a complaint against the British, crowned Olympic champions and suspected of having let the Polish crew voluntarily pass to the last buoy. , ultimately in money.

But the jury rejected this protest which, if accepted, could have resulted in the disqualification of the British from the final regatta.

The French Aloïse Retornaz and Camille Lecointre, during a round aboard their 470 double dinghy, July 30, 2021 at the Tokyo 2020 Olympic Games in Enoshima Peter PARKS AFP / Archives

"We had the feeling that the Englishwoman had deliberately let the Polish woman pass, so we lodged a complaint," said Guillaume Chiellino, the national technical director of the French Sailing Federation (FFV).

"The international jury judged that there was no fault of the Englishwoman. Of course we agree with this decision and we are very happy with this third medal", he added.

The title went to the British Hannah Mills and Eilidh McIntyre, ahead of the Poles Agnieszka Skrzypulec and Jolanta Ogar.

The final regatta was won by the Swiss women.

The Poles took 4th place, ahead of the British and French.

Camille Lecointre, 36, mother of a little Gabriel, born after the Rio Olympics, had already won the same metal in Brazil in 2016 with another partner, Hélène Defrance.

This is the third podium for French sailing at the Tokyo Olympics after the silver medals of Charline Picon and Thomas Goyard, both in RS: X windsurfing.

Great Britain is at the top of the discipline's records with three titles.

The joy of French windsurfer Charline Picon, after her silver medal in RS: X, July 31, 2021 at the Tokyo 2020 Olympic Games in the port of Enoshima in Fujisawa Peter PARKS AFP / Archives

European Champions recently in Villamoura (Portugal), Lecointre and Retornaz had landed in Enoshima, a stretch of water south of Tokyo, with the clear intention of winning gold.

Second before the final round, however, they had to count on a misstep from the British.

In 2016 in Rio, the Tricolores had won a title with Charline Picon in RS: X and two bronze medals, in RS: X men with Pierre Le Coq and in 470 women, with Lecointre therefore.

The disappointment came from the men's 470 crew made up of Jérémie Mion and Kévin Peponnet, also recent European champion, but who finished 11th at the end of the qualifications and did not qualify for the "medal race" .

Peponnet hoped to succeed his uncle Thierry, the last French Olympic champion in 470, in 1988 in Seoul, with Luc Pillot.

French sailing will have the honor and the advantage of sailing at home in 2024, the regattas of the Paris-2024 Olympics taking place in Marseille, on the site of the French pole of the FFV.

The ten series present in 2024 will undergo grooming.

The Finn, a historic boat at the Olympics, but for which no French was qualified in Tokyo, will disappear.

If the 49er men and women remain, just like the mixed Nacra 17 and the Laser men and women, windsurfing will be equipped with a foil and only one crew of 470 will be present, now mixed.

Kite-surfing, with two events for men and women, will give Olympic sailing a boost and youth.