In France, Pokaa, the first "Covid sniffer" dog in a retirement home - France 24

In France, Pokaa, the first "Covid sniffer" dog in a retirement home Kunheim (France) (AFP) A truffle sharpened against the Covid-19: since Friday, Pokaa, a two-year-old golden retriever, has been deploying his flair in Alsace (east) to detect possible positive cases. A "first" in France in a retirement home. Resident of the La Roselière establishment in Kunheim, near the German border, Christophe Fritsch has already had to deal with Covid tests. Last year, this 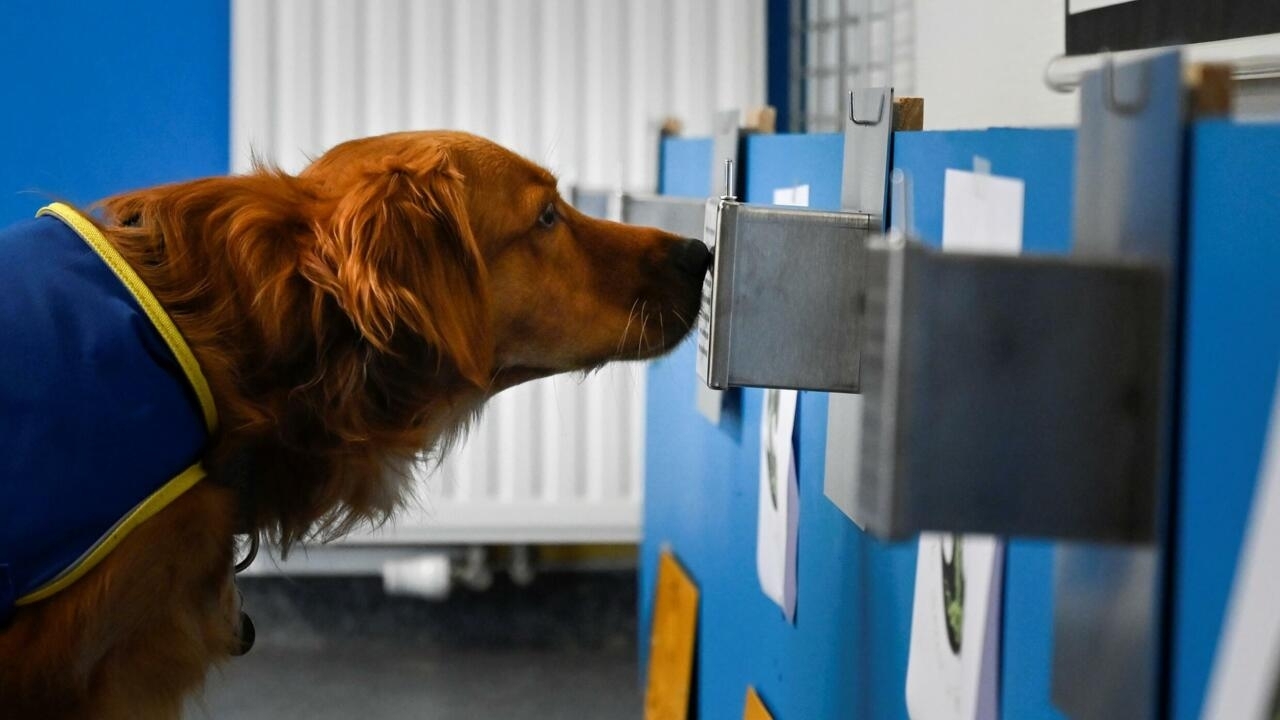 A truffle sharpened against the Covid-19: since Friday, Pokaa, a two-year-old golden retriever, has been deploying his flair in Alsace (east) to detect possible positive cases.

A "first" in France in a retirement home.

Resident of the La Roselière establishment in Kunheim, near the German border, Christophe Fritsch has already had to deal with Covid tests.

Last year, this 85-year-old former horticulturalist was struck by the virus.

He got out of it but when we ask him what he thinks of the tests conducted by Pokaa, the octogenarian does not hide his preference: "It does not compare. It is very pleasant (...), we compresses a small piece of tissue "under the armpit and" after 5 minutes, it is removed. A PCR test is still more complicated ... ".

Handled with gloves so as not to imprint on them another body odor, the samples impregnated with sweat are placed in sterile bags, then placed in boxes.

What its sharp nose detects is the "Spike" protein, the one by which the virus enters cells to infect them, explains Alain Legrand, CEO of Handi'chiens, an association specializing in the education of dogs. assistance for people with disabilities, from which Pokaa comes.

Handi'chiens has four education centers in France, including one in Kunheim, adjacent to La Roselière.

During tests conducted last week in the retirement home on samples from the Strasbourg hospital, Pokaa recognized "100%" the positives and the negatives, explains Dr Pierre Kohser, doctor of La Roselière.

Pokaa, a Covid-19 sniffer dog, with his educator in front of boxes containing test samples, at the Ehpad La Roselière in Kunheim in Haut-Rhin, August 2, 2021 SEBASTIEN BOZON AFP

Capable of "spotting all of the known variants", Pokaa scores "100% on the symptomatic" and "95% on the asymptomatic", a category that is crucial to identify, continues Mr. Legrand.

In the latter, it can even "detect the virus about 48 hours before the PCR tests".

If the idea of ​​dogs detecting diseases (cancer, epilepsy ...) is not new, the novelty with Pokaa is that it is currently the only sniffer dog for Covid in a retirement home in France " , explains Alain Legrand.

A very useful presence, notes Dr. Kohser, because this testing is "simple", very inexpensive and "well tolerated" by residents, often suffering from cognitive disorders such as Alzheimer's and who "struggle when they have a smear".

Residents of the La Roselière nursing home which now welcomes Pokaa, a sniffer dog of Covid-19, on August 2, 2021 in Kunheim in the Haut-Rhin SEBASTIEN BOZON AFP

The olfactory qualities of Pokaa, which already intervened in twenty retirement homes as a mediation dog, are the result of a "four week" training at the National Veterinary School of Alfort, near Paris, for follow the Nosaïs-Covid19 method of Prof. Dominique Grandjean, explains Christelle Schreiber, dog trainer at Handi'chiens.

Pokaa was trained there with two other dogs from the association, specifies Benoît Seewald, head of the Handi'chiens center in Kunheim.

For now, only Pokaa exercises its Covid jurisdiction.

Pokaa, a Covid-19 sniffer dog at the La Roselière nursing home, August 2, 2021 in Kunheim in the Haut-Rhin SEBASTIEN BOZON AFP

Director of La Roselière and president of Handi'chiens, Robert Kohler is convinced of the usefulness of these tests in establishments where they can "save lives".

Like other retirement homes in France, La Roselière was hit hard by the first two waves, with "an excess mortality of 17 or 18 people", testifies Dr. Kohser.

Of the 112,000 people who died from Covid in France, more than 26,000 died in retirement homes and specialized establishments.

No case has been detected among residents since December 2020, specifies Mr. Kohler, who nevertheless plans to carry out a viral "mapping" by subjecting the 127 residents and 110 staff members, the vast majority vaccinated, to the flair of Pokaa.

"A series of tests every two or three weeks seems to me an opportune calendar", why not including the visitors, he slips.

The association, which funded the training of the three dogs, would now like to see this system spread to other establishments.

The olfactory qualities of Pokaa, which was already involved in around twenty nursing homes as a mediation dog, are the result of "four weeks" training at the National Veterinary School of Alfort SEBASTIEN BOZON AFP

However, unthinkable without the financial assistance of the public authorities: Handi'chiens, who lives mainly on donations, cannot provide for the training of its 250 dogs, explain MM.

Legrand and Kohler, for whom "support from the health authorities would really be a plus".