European flow: why Lithuania cannot cope with illegal migrants at the border with Belarus

Border outposts in Lithuania are overcrowded due to migrants who continue to arrive from Belarus. This was stated by the head of the State Border Guard Service of the country, Rustamas Lyubayevas. According to him, a record number of illegal immigrants were detained last weekend and there are no more places to accommodate new ones. In the current situation, Vilnius blames Minsk, which allegedly connives at the transfer of refugees. In this regard, the Ministry of Foreign Affairs of Lithuania reported that they are going to raise the issue of sanctions against Belarus at the level of the European Union. The EU also noted that they may impose restrictions on persons allegedly involved in organizing illegal migration in Belarus. Experts believe that the current situation is a consequence of the ill-considered policy of Lithuania and the EU towards the republic as a whole. Therefore, they believe, now Brussels needs to either establish a dialogue with Minsk,or close their borders. 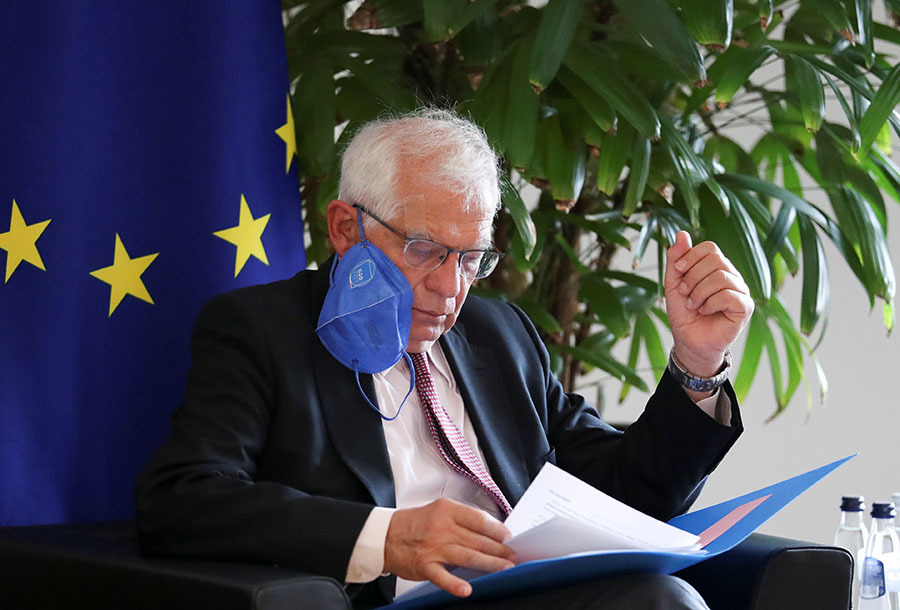 Lithuanian outposts on the border with Belarus are overcrowded due to all the arriving migrants from Asia and Africa, and there are no more places to accommodate new refugees.

This was told by the head of the State Border Guard Service of the country, Rustamas Lyubayevas.

“All border points are now full, and on Saturday and Sunday we had to solve the issue of accommodating people.

We understand that there is no way to move migrants anywhere from the points of the State Border Service, and so far we have managed to solve the problem, but our possibilities are almost exhausted, ”said Lyubayevas.

In general, according to the State Border Guard Service (VSAT), the number of illegal immigrants who arrived in Lithuania this year has already exceeded the mark of three and a half thousand people.

These are mainly Iraqi citizens.

The VSAT notes that the current figures exceed the indicators of 2020 by more than 40 times - last year 81 people illegally crossed the border.

Meanwhile, the head of EU diplomacy, Josep Borrell, has already said that not all migrants will receive asylum in the European Union.

“Individuals who do not have the right to remain in the EU should be expelled,” he said.

Due to the fact that a large number of refugees from Iraq are moving to Lithuania through Belarus, the head of EU diplomacy, Josep Borrell, announced an appeal to Baghdad with a request to help deter illegal immigrants.

“This problematic issue worries not only one EU state, but the entire European Union.

This is an issue of concern not only for one Member State but for the entire EU.

We count on Iraq's support.

Lithuania and the EU as a whole blame Belarus for the current situation with migrants.

In their opinion, Minsk not only connives at illegal crossings, but also allegedly contributes to them.

Thus, the European Commissioner for Internal Affairs, Ilva Johansson, while visiting the outposts on the border of the two countries, stated that the crisis that has arisen in the republic should be regarded as a provocation on the part of the Belarusian authorities.

"We must show that there is no free access (for illegal migrants. -

) to the EU," TASS quoted her as saying.

Earlier, the head of the Lithuanian Ministry of Defense Arvydas Anushauskas called the attitude of Minsk a hybrid war.

“The current situation on the border is not an ordinary migration crisis, it is the actions of a hybrid war directed against the stability of the European Union, NATO, and especially the Baltic countries.

This hybrid attack requires a unified and coordinated response from the Baltic countries, ”Delfi.lt quoted Anushauskas as saying on July 29.

Therefore, he believes, new sanctions should be introduced against Belarus in order to put pressure on it.

Later, however, Landsbergis admitted that restrictions may not be necessary if Minsk voluntarily resumes control over migration flows.

In the meantime, the country is trying to fight illegal immigrants by erecting a wall of barbed wire on the border with Belarus and involving the army in patrolling cordons.

Despite this, the flow of refugees does not decrease, which causes discontent among local residents.

In particular, in the town of Diveneškės with a population of 700 people, rallies were held against the placement of about half a thousand illegal migrants on its territory.

Meanwhile, Brussels did not rule out the introduction of new sanctions.

As the head of European diplomacy Josep Borrell emphasized, restrictions can be adopted in relation to those Belarusian persons who are allegedly responsible for the migration crisis in Lithuania.

“The European Union and its member states condemn the fact that the Belarusian regime has turned migrants and refugees into an instrument of political influence ... human trafficking, ”Borrell said.

In Belarus, however, accusations of deliberate connivance in the trafficking of migrants are denied.

As Alexander Lukashenko said earlier, Minsk continues to fulfill its obligations on the border with Lithuania, "but only as much as necessary is beneficial ... for the country and financially possible."

According to him, even now, despite the previously imposed sanctions, Belarus is fighting illegal migration, the supply of drugs and weapons.

Moreover, she does this, the head of Belarus emphasized, at her own expense, whereas earlier these events were funded by the European Union.

He also expressed a lack of understanding how, in the light of the sanctions introduced in June, the EU expects something more from Minsk.

“They have imposed sanctions against us, and we are accused that Lukashenka promotes illegal migration ... They strangle us, and we will protect them?

This is not naive, this is already insane, ”Lukashenka stressed at a meeting with Belarusian diplomats on July 20.

Experts believe that both Vilnius and Brussels are to blame for the current situation on the Belarusian-Lithuanian border.

In particular, Vladimir Olenchenko, senior researcher at the Center for European Studies, IMEMO RAS, believes that in Lithuania the inability to cope with the flow of migrants is associated with a crisis of governance within the country.

“The fact that Lithuania is facing a migration crisis is part of a governance crisis.

The current Lithuanian leadership is keen on various kinds of teachings in relation to other countries, and also demonstrates a desire to dictate their ideas to the EU leadership, for example, regarding Nord Stream 2, and to express their views on what should be the strategy of Europe as a whole, ”- he explained in an interview with RT.

In this regard, Olenchenko believes, Lukashenka's position is fully justified.

After all, the EU has the European Border Protection Agency Frontex, which should deal with issues such as illegal migrants.

“Before the deterioration of relations on the part of Belarus, the border was properly controlled, in particular, the Belarusians did all the work for Lithuania and the EU.

But in general, the EU has a service called Frontex, which should ensure the external European borders, and it is assumed that countries such as Lithuania receive funds for this, ”Olenchenko added.

In this regard, the senior lecturer of the Department of International Politics and Foreign Regional Studies of the Institute of Social Sciences of the RANEPA Sergei Margulis is sure that the Lithuanian authorities and other EU countries need to conduct a dialogue with the Belarusian side.

“In general, now Belarus has no particular interest in slowing down this flow, since the EU countries do not offer it anything in return.

Today, Brussels needs to radically change its approach to the issue of migration and, accordingly, tightly close borders or conduct a dialogue with the leadership of Belarus, "Margulis said in a commentary on RT.

While in Vilnius they are considering the possibility of contacting other EU countries with a request to accommodate the arrivals on their territories.

This, in particular, was stated by the Prime Minister of Lithuania Ingrida Simonyte.

In turn, the deputy foreign minister of the republic, Mantas Adomenas, noted that Lithuania can receive no more than five thousand migrants from outside.

“Of course we don't want to let them travel further west.

Often their target is Germany.

But if there are more and more of them, we will not have enough resources.

And then you will have to skip them further, ”he quotes the diplomat DW.

Analysts believe that Vilnius may have problems with the request for the placement of illegal immigrants in other European countries.

Volodymyr Olenchenko called them the reason for Lithuania's position on the migration crisis in 2015.

Then, he reminded, Vilnius and a number of other countries refused to host refugees, despite the call from Brussels.

“I am sure the European Commission will now remember this for them,” Olenchenko said.

At the same time, he admitted, the EU authorities can take the step they took then with regard to Turkey.

An agreement was concluded with Ankara that it slows down illegal immigrants on its territory, and Brussels allocates funds to it for their accommodation and deportation.

“Turkey transferred funds for the arrangement of refugee camps so that they would not strive to Europe.

In turn, Nikolai Mezhevich, chief researcher at the Institute of Europe of the Russian Academy of Sciences, believes that it is rather difficult to implement the Turkish scenario in Lithuania, since the bureaucratic system of the EU itself comes into play here.

“In general, the EU is a set of states with strict regulated charters on all issues of domestic and foreign policy, including migration.

There is a complex body of documents that regulate the behavior of national and supranational authorities in the event of the appearance of third-country nationals on the territory of the EU.

Therefore, Brussels cannot immediately begin to create a camp that would stop migrants on the territory of Lithuania, since this requires regulations, and they, as you know, are drawn up for years, "Mezhevich explained in a commentary on RT.

In this regard, Vladimir Olenchenko believes, Brussels will take a less costly path, introducing more and more sanctions against Minsk, which, however, will not be effective.

“Now the EU is mainly talking about the need to adopt new sanctions against Belarus. However, this measure is unlikely to work, because not citizens of Belarus are arriving in Lithuania, but citizens from the Middle East and North Africa, ”the expert summed up.