Nervousness after the derailment of a train at the Puerta de Toledo Metro station: "I thought they had planted a bomb"

&amp; quot; I read that the blow had been slight ... But I was in a middle car and it was strong enough for the lady next to me to grab onto ... 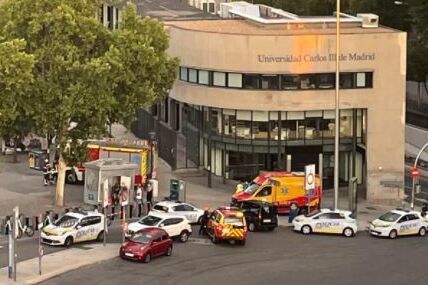 "I read that the blow had been slight ... But I was in a middle car and it

that the lady next to me grabbed my arm in shock."

This is how Paula remembers the moment of the event, one of the 200 people who were traveling on the

train that derailed on Line 5 of the metro this Saturday

, at the entrance of the Puerta de Toledo station.

After the impact, which took place at 8.30 pm, the lights flickered and the train came to a halt. Paula evokes to this newspaper how, at first, both she and the rest of the travelers remained calm, trusting that "soon she would move again", but as the minutes passed the

throughout the convoy. "It was a bit traumatic for me because I didn't know what was happening for a long time. I imagined the worst ... I called my mother crying

thinking that they had planted a bomb

. Nobody told us anything," recalls this young woman, still shocked by what happened.

She, along with the rest of the users, were evacuated. To do this, they had to go through several of the doors that separate the wagons until they reached "a kind of metal ramp" through which they were able to access another train that took them to the Acacias station. Beyond the initial confusion,

there was only one minor injury

: an individual who suffered a blow to the shoulder and was treated and discharged from the scene.

"The Police and Metro staff, as well as the Fire Department, did an incredible job helping and reassuring people," highlights Paula, who

"due to an incident at the facilities"

, which puzzled many passengers. After revealing that what had really occurred was a derailment, dozens of users

did not hesitate to reproach Metro for

"Incidence is when there is a blackout or a pipe breaks;

a derailment is an accident

", "Nice euphemism to call 'incidents in the facilities' to avoid saying derailment" or "I do not understand why Metro does not indicate it with more precision what it happens,

if it is going to end up knowing the same

MobilityVox tightens with Madrid Central: it will only support the Mobility Ordinance if the center reopens to all cars

Formula 1The swing of Alonso and Ocon: why does one go up when the other goes down?