On Friday night, a woman in her 25s was killed in Luleå. On Saturday, a man in his 30s was arrested and according to initiated sources to SVT, the police hunt continues for at least one more person. The police believe that a solution to the murder can lead to the solution to a large part of the crime in the city. 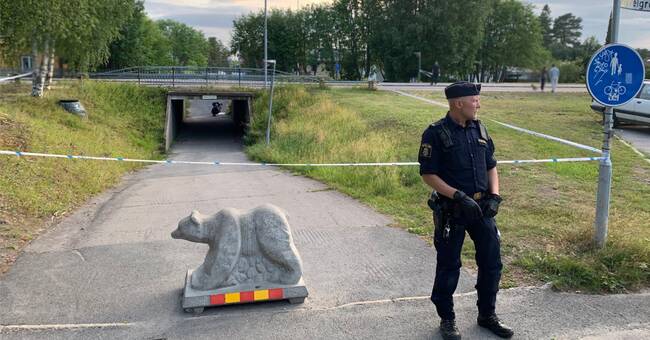 Then several people must have left the place in different cars.

Shortly afterwards, the woman in her 25s was found dead on the beach in Notviken in Luleå.

The police have invested considerable resources in getting hold of those who carried out the act.

The man who has been in custody since Saturday is suspected of murder for probable cause.

But according to information to SVT, the police must search for at least one more person.

Several people are believed to have been at the scene and the police do not rule out that the person who held the murder weapon on Friday is still at large, according to an initiated source to SVT.

Nor do they rule out the possibility that more than one weapon may have been used.

The sources believe that this can be linked to a crime that has escalated in recent years in Luleå.

That is why this particular murder investigation is "extremely prioritized" by the police.

It can lead to a solution to a large part of the crime in the city.

The man who has been arrested has been questioned and the police are looking for more witnesses to the incident.

On Saturday, a subway was blocked off just a few hundred meters from the crime scene.

After searching the area with dogs, the police found an object that was taken care of in a brown envelope, according to SVT's reporter on site.

According to information to Aftonbladet, it must have been a pistol that was found there.

Since the alarm came in on Friday night, the police have been silent.

When the man was arrested on Saturday, the police described it as an "isolated incident" where residents in the area did not have to worry.