The death toll in connection with the forest fires in Turkey has risen to six people after two people who worked to fight the fire died on Saturday. Work is still underway to fight the fires. - It smells of smoke and particles come all the time, says Veli Oktav, who is in turquoise Side. 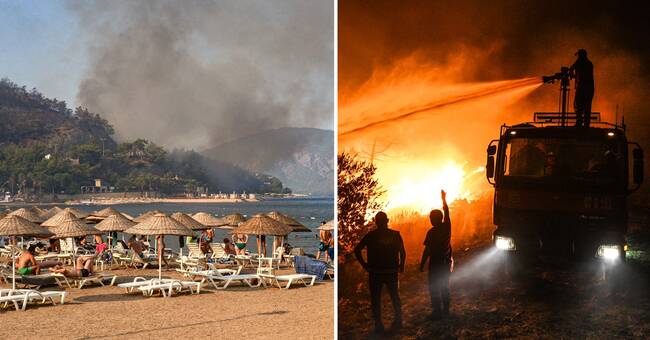 Satellite images have shown how smoke from the fires in Antalya and Mersin extended to Cyprus, which is about 150 kilometers away, reports Reuters.

According to the country's Minister of Agriculture, a total of 88 of the 98 fires that have broken out in the last four days must be under control.

New fires broke out in the southern Hatay province where flames hit populated areas, but are now under control, writes AP.

The death toll in the fires rose to six on Saturday, after two people died, the country's health ministers say.

According to Reuters, there will be two firefighters, according to AP two forest workers.

In the city of Bodrum, hotel guests have been evacuated according to Turkish media.

They hurried to the beach to wait for lifeboats, due to the danger of forest fires.

The Ministry of Foreign Affairs states in an email to SVT that they have no information about the situation in Bodrum, but that according to their information it is estimated that there are around 1000 Swedes in Turkey, of which 400 in the areas of Antalya / Alanya / Manavgat.

Veli Oktav has been living in Side, between Alanya and Antalya for twelve years.

Extinguishing work is currently underway where he is.

- It smells of smoke and particles come all the time.

The municipality waters plots and lawns, he tells SVT News.

He says that there is a collection of food and clothes for the needy and he himself has helped to transport food and drink.

The president visited the area

He said, among other things, that the Turkish government will cover the costs of people affected by the fire.

"We can do nothing but ask for God's grace for the lives we have lost, but we can replace everything that has burned," he said.

According to the country's health minister, 400 people who were taken to hospital in connection with the fire in Manavgat have had to leave, ten are still being cared for.

In Marmaris, 159 people were cared for, one is still being cared for, writes AP.

The Ministry of Foreign Affairs is following developments

According to the Ministry of Foreign Affairs, which has no information about injured Swedes in Turkey, Swedes are urged on the spot to follow the advice and instructions of local authorities and contact their relatives.

For practical questions, travelers are encouraged to contact their travel company or insurance company.