JO-2020: Teddy Riner, out of the ordinary Tokyo (AFP) Teddy Riner, even only in bronze in heavyweight, gave an even more monumental dimension to his already extraordinary stature, both on and off the tatami mats, by sharing the Olympic gold of the mixed team event with the Blues, Saturday in Tokyo. At the end of an Olympiad like no other, the Guadeloupe colossus did not become the first heavyweight triple Olympic champion in history as 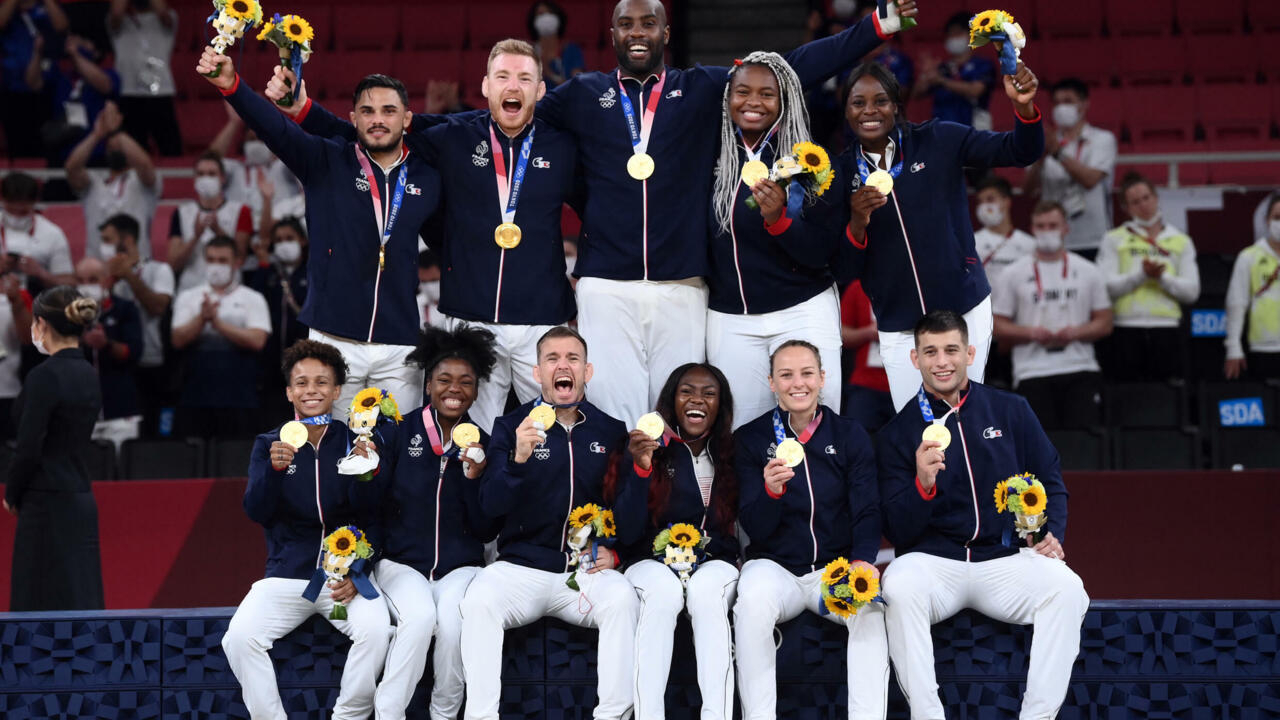 Teddy Riner, even only in bronze in heavyweight, gave an even more monumental dimension to his already extraordinary stature, both on and off the tatami mats, by sharing the Olympic gold of the mixed team event with the Blues, Saturday in Tokyo.

At the end of an Olympiad like no other, the Guadeloupe colossus did not become the first heavyweight triple Olympic champion in history as he aspired to.

But, thanks to the new mixed team event, he nevertheless joined the Japanese Tadahiro Nomura, the only other three-time Olympic gold medalist, him in lightweight (1996, 2000, 2004).

With the bronze obtained in +100 kg in 2008, his collection of Olympic medals became a record: with five, he equaled, at 32, the Japanese legend Ryoko Tani, she however only rewarded individually between 1992 and 2008.

At the Worlds, it's been a long time since Riner has no equivalent: for ten years and his fifth coronation for men, and since 2015 and his eighth, women and men combined.

In total, between 2007, when he became the youngest judoka world champion, the year of his 18th birthday, and 2017, he piled up ten crowns, eight in +100 kg and two in all categories.

The "decima", symbolic milestone of sport, was close to his heart.

"I want to mark the history of my sport," he repeats.

Since his childhood, Riner, 2.03 m for 140 kg approximately at his optimal weight, evolves in an extraordinary body.

Before turning it into a lethal weapon, he had to learn to tame it.

When he was still a baby, "one day, I put him on the scale and he had gained a kilo, I was scared, I ran to the pediatrician", tells AFP his mother Marie- Pierre.

"He pushed at lightning speed. In kindergarten, he was already around 1.30 m," she recalls.

"One day, he said to me: + Mum, where is my place? When I'm with the grown-ups, they tell me that I'm not in my place, when I'm with the little ones, the same… I have to Who do you play with? + When a child says that to you, you have tears in your eyes! ", relives the mother, who consulted a child psychologist at the time.

"I have always been aware of the difference. When I took the metro, I saw the looks on me immediately. I learned to do with", keeps in mind Riner, entered the Insep at the age of fifteen, an exception.

What makes it special is that it combines an imposing silhouette with unusual liveliness and mobility in heavy vehicles.

Qualities immediately spotted, when he was still a teenager, by Franck Chambily, his trainer for fifteen years whom he describes as "second father".

"It was in 2005, I was told: + Go see, there is a heavy that is not bad, coordinated, extraordinary, he says. Indeed, in these categories of age and weight, we weren't used to seeing big guys, and this one wasn't a big one. "

Riner also draws his success from his absolute hatred of defeat.

"For him, it's a nightmare, it's like cutting his arm," says Chambily, who takes the example of a junior tournament at Insep.

"He was a junior and he lost in the semifinals against the French junior champion. And then hop, he disappears. We had to go get him, he was crying like a kid. He had not won the gold medal, so he didn't want to fight anymore. "

In seniors, Riner, who remained undefeated for 154 fights and almost nine and a half years between September 2010 and February 2020, had only four defeats, the most recent in the quarter-finals in +100 kg on Friday, against the N.1 world Tamerlan Bashaev.

"He sets the mood, he is very joker, very sparkling, testifies one of his physical trainers, Julien Corvo. However, it is a hard work. Very voluntary and very positive."

Beyond the mats, and over the construction of an exceptional track record, the champion, described to AFP as "a force of nature with a big heart" by his childhood friend, the former judoka Fred Escalante, has carved out a sacred popularity rating, which is worth to him to be coveted by the sponsors.

This is evidenced by his eighth place in the ranking of the fifty favorite personalities of the French at the end of 2020, established by the Sunday Journal, or his wax statue at the Grévin museum.