For the fourth year in a row, a so-called jam is arranged in Gåsebäck's graffiti park during the three-day festival Gåsebäcksfesten. Over 50 graffiti artists from all over the country have gathered to decorate the walls with their own style for three days. 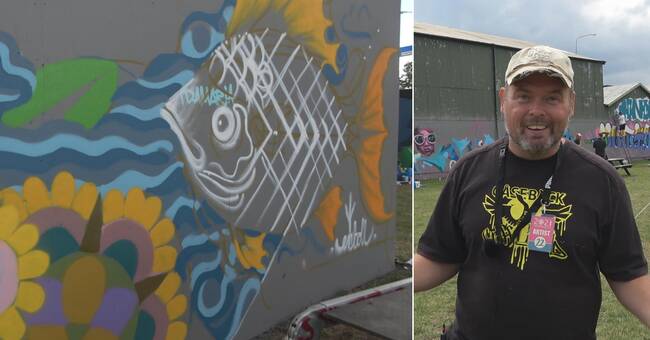 - We see this as a "show room" to show that we have very competent artists in our own country as well.

When graffiti has become more accepted in public, big foreign names are often brought in to decorate the cities, but these locals are absolutely competent enough, says the organizer Jimmy "Skize" Svensson.

He has been involved in building the graffiti park at the old fire station in Helsingborg.

He himself has worked with graffiti for 37 years and describes himself as "graffiti's great-grandfather" in Sweden.

- When the zero tolerance for graffiti in Sweden came, they stifled the creative but kept the graffiti because it will always exist.

To develop in your art, you need to be able to stand and paint in peace and quiet in large format.

One of the artists who went down to Helsingborg to paint graffiti is Stockholm-based Idamaria Holmqvist.

She hopes that the event can influence the public's and politicians' perception of graffiti.

- Graffiti is very much associated with graffiti and vandalism, but here you get to see how good people are and how beautiful it can be.

For politicians, I think that one might be able to approve that something like this may remain in the city center, she says.

See Idamaria Holmqvist paint her work of art in the clip at the top.